The Royals have a nice stretch going against their Central Division foes, let's keep it going.

The Royals have dropped five of their nine contests against Minnesota this year, although they took two of three in their last series up at Target Field at the beginning of July. The Twins are reeling a bit, dropping seven of ten games on a recent homestand against teams with losing records - the Rays, Indians, and White Sox. Its been a tough year for the boys from the Land of Ten Thousand Lakes - their 47-57 record is worst in the division and the third worst in the league.

The Twins offense got off to a hot start this year, but the team scored just 26 runs on their ten game homestand. They are still eighth in runs scored per game at 4.12, just under the league average. But the club is missing injured All-Star Joe Mauer as well as centerfielder Aaron Hicks, and recently traded designated hitter Kendrys Morales, although that deal may arguably improve the lineup as Morales was a massive disappointment. 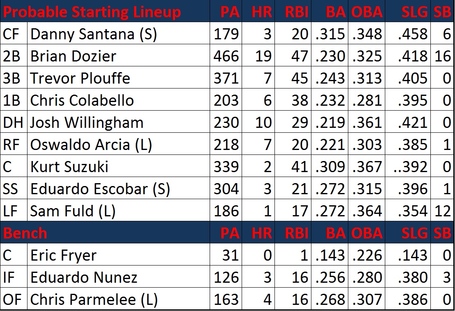 The Royals will face one of the better free agent bargains in Phil Hughes, who signed a 3 year $24 million deal with the Twins last winter. Hughes is sixth in the league among pitchers in fWAR, and has excelled with a 2.70 FIP and a team-high ten wins.

The Twins seem to be back to their "pitch-to-contact" philosophy, as the team is dead last in strikeouts, and first in fewest walks issued. They have also given up the fewest home runs, and their starting pitchers have pitched the fewest innings in the league. Mizzou grad Kyle Gibson, tonight's starter, has put up decent numbers this year despite an absurdly low 4.5 strikeouts per nine innings, in part because has given up just seven home runs in 19 starts.

Twins relievers have the fourth best ERA among American League bullpens, despite having the lowest strikeout rate. All-Star closer Glen Perkins is 25 of 28 in save opportunities this year and right-hander Casey Fien has a strikeout-to-walk ratio of 5.00. The Twins employ three lefty-relievers in their bullpen, but only Brian Duensing (.540 OPS against) have been nails against left-handed hitters while Caleb Thielbar actually has a reverse split.