The designated ace of the Royals isn't coming up aces. This is a problem.

Share All sharing options for: What's wrong with James Shields?

After his previous start's nonsense, James Shields sits at a 3.93 ERA, 4.04 FIP, and 3.69 xFIP, and those numbers don't really show the trend, which is trending the wrong way. These are numbers that are pretty close to league average. The Royals did not acquire Shields to be league average. The Royals acquired him to pitch in big games because big games are all the games except the games in which Shields doesn't pitch. There is a change to which we can point that might be the problem.

First, there is a thing that hasn't changed. On a year-to-year basis, Shields' velocity is increasing. On a month-to-month basis this year, his velocity is also increasing. Velocity isn't the problem. Normally, an aging pitcher in decline is suffering from velocity issues. Not here. Move along.

There's a change in his pitch mix, though. Brian Bannister and Mike Boddicker talked about this on 810 WHB, but since I have the internet and not a microphone, I'll let a picture do some talking. You know, through osmosis. 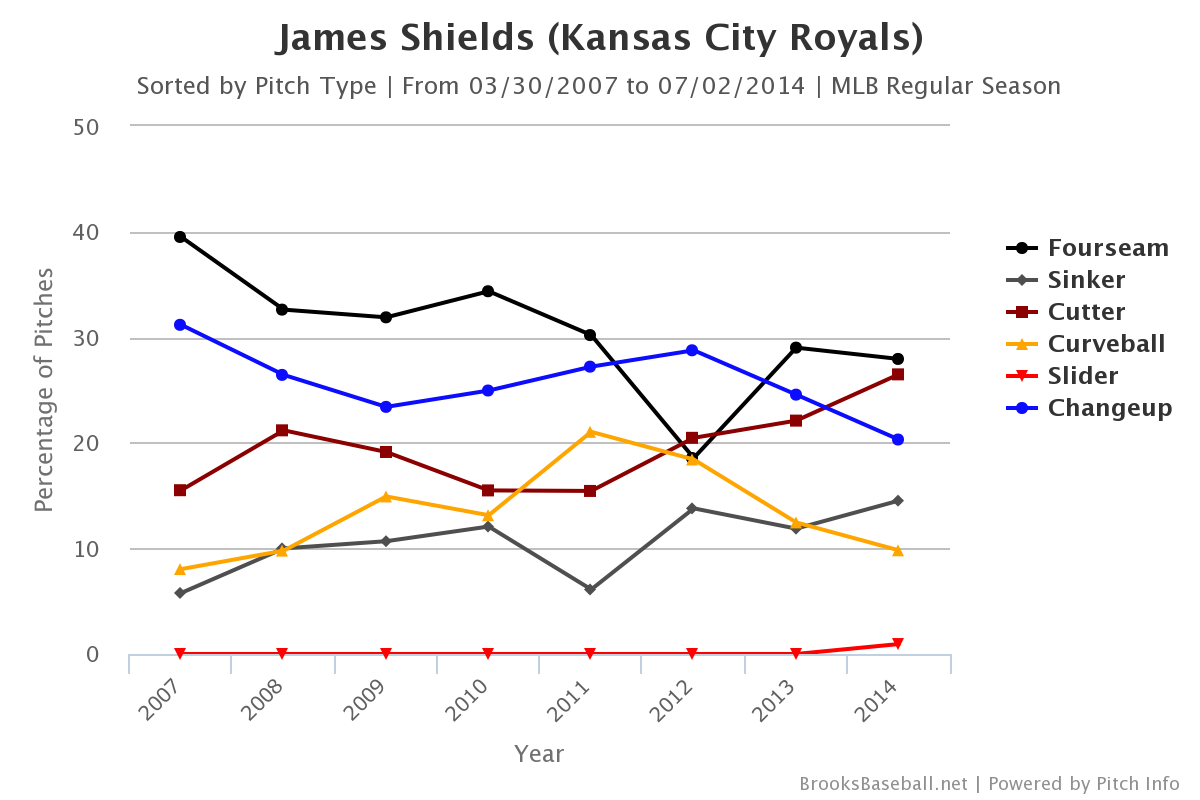 There it is! The thing at which I have been hinting! The changeup! Shields' best pitch is supposed to be the changeup. It's consistently been ranked very well compared to other changeups by FanGraphs' pitch weight values. But, now, the changeup is in its second straight year of declining usage. If Shields is using his best pitch less, is it possible that it's not as good anymore? Unfortunately, yes it is. Continue along with me. 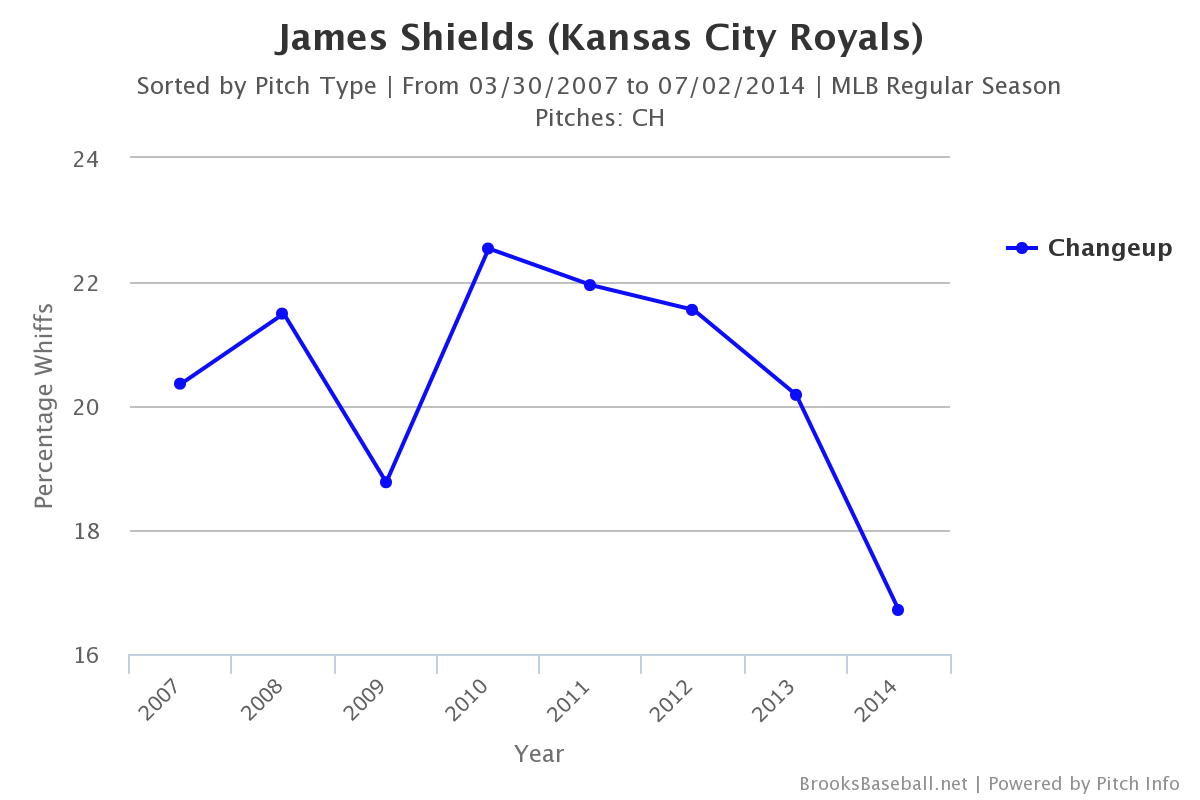 Oh my. Look at the plummet. Shields' changeup isn't getting as many whiffs this year, and the pitch is on a decline since 2010. That's not good. Maybe it's more hittable, but perhaps hitters aren't doing much with it? This year, hitters are getting more line drives off the changeup and have a .194 ISO against it, which is the highest it's ever been for Shields' career. Historically, the changeup hasn't been Shields' most vulnerable pitch to homers. This year, the homer rate of his changeup is about double his career value, and it's the highest among all his pitches this year. Not only does the changeup seem to be more hittable, but hitters seem to be doing more damage when they hit it.

Hey, it's been only half a season; maybe this is small sample variation? It's possible. At this point, I'll turn to some data that don't involve a batter, or at least involve a batter less. The horizontal movement of the pitch is about the same, but look at the vertical movement. 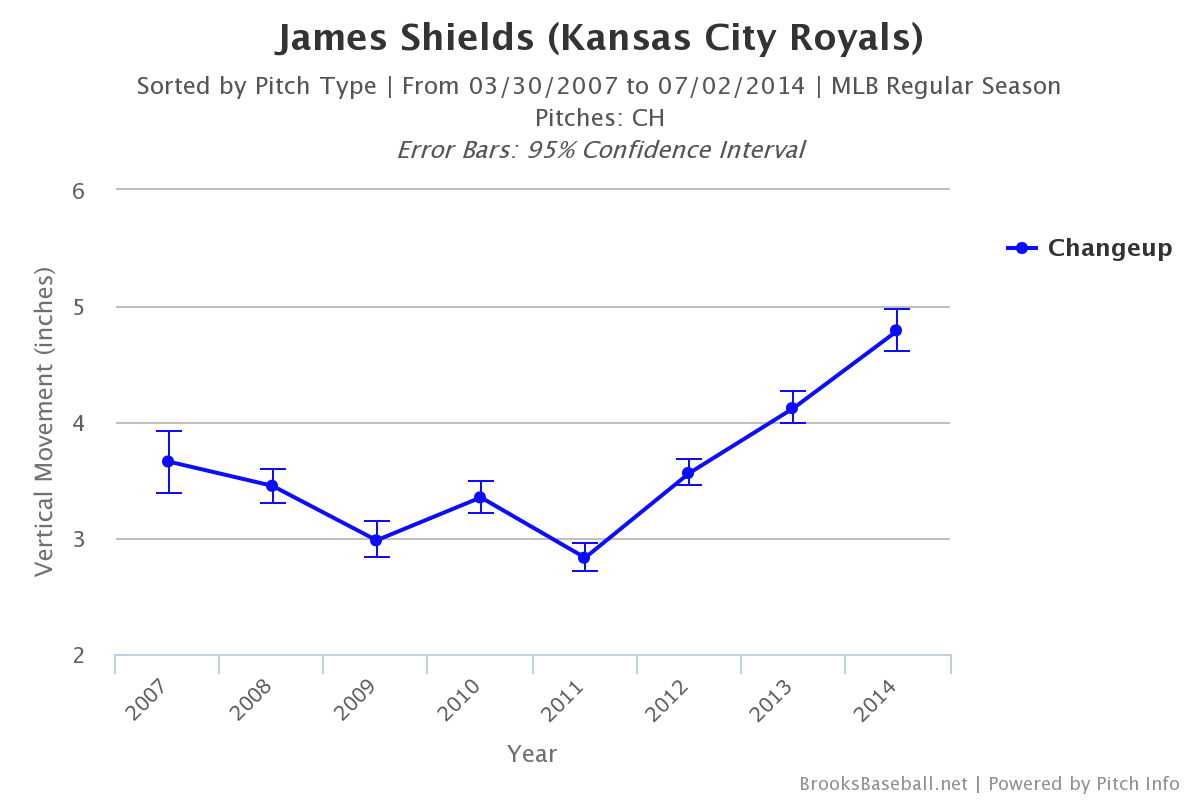 The visual is a bit counter-intuitive, but Shields is getting less vertical drop on his changeup this year, and that follows a trend beginning in 2012.

I don't know about you, but the changeup in the second gif seems to be dropping more, not less. Camera angles, maybe. Or maybe I'm just terrible at selecting pitches to show in gifs. Regardless, Shields' changeup isn't as good, but Shields has a long track record of success. Maybe he's working on something else to compensate? Referring back to the pitch mix graph above, Shields has increased the usage of his cutter and sinker while decreasing the usage of his changeup and curveball. The sinker and cutter don't whiff nearly as much as the changeup does, though, and they don't necessarily control contact. Those pitches are also getting hit hard.

So, Shields' changeup is worse, and he doesn't seem to have other pitches to compensate; Banny and Boddicker talked about his curveball usage declining, too. Thus, we have an average James Shields on our hands. Our defense will continue to help him out, as they do for all the pitchers, but Shields has to figure something out in order to regain his big game status.