Indians Series Preview: Back to Brohio

Share All sharing options for: Indians Series Preview: Back to Brohio

Royals fans have looked at the Indians the past few years and thought "they don't look much better than us on paper", and have gone on to see the Indians enjoy a fairly successful season while the Royals look up at them in the standings. This year, the Royals are finally up on the Indians in the Central Division, but only by three games, a gap that could narrow this weekend. Cleveland had a short winning streak to get them above .500, but for the most part have settled in just below .500 much of the year. The Indians took three out of four the last time the Royals visited this mecca in Ohio, with the Royals sweeping a short two-game set in Kansas City as part of their ten game winning streak.

The Indians are fifth in the league in runs scored, with 4.43 per game. They are a very balanced team, as they are fifth in on-base percentage, seventh in slugging percentage, eighth in home runs, and eighth in steals. Indians catcher/first baseman/third baseman/designated hitter Carlos Santana got off to a brutal start, but has been hot lately, hitting .290/.432/.560 with 7 HR in his last 29 games. On the other side, Lonnie Chisenhall, who got off to a fantastic start and was coming off a 3 HR 9 RBI game when the Royals opened up their last series against him, is hitting just .203/.299/.390 over his last 16 games since the Royals series. Everyone's favorite bro Nick Swisher has had a disaster of a season thus far, and has two and a half years left on his deal, owing him $35 million. 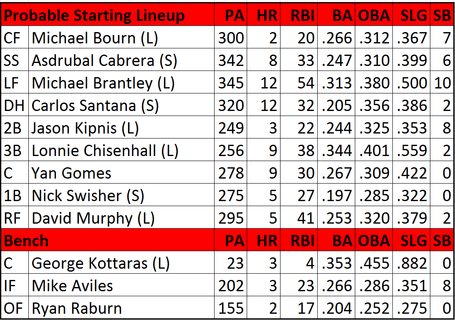 The Indians rotation has been a bit of a project this year, but the Royals will face two of their best pitchers this weekend in Josh Tomlin and Corey Kluber. Tomlin was once a middling control artist who has seen a sharp spike in strikeouts this year, despite a fastball in the high 80s. Kluber has been one of the best pitchers in the league this year with the ninth best ERA and is ninth in WAR among American League staring pitchers. Kluber has a 3-1 record with a 3.77 ERA in seven career starts against the Royals. 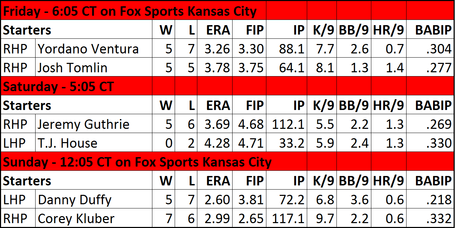 Indians relievers have the third most innings pitched, but have pitched relatively well with the fourth best ERA in the league. The front of the bullpen has been in flux, but Cody Allen has settled into the closer's role, converting eight of nine save opportunities with a 2.50 ERA. The Indians sport a deep bullpen with eight arms, so look for manager Terry Francona to mix-and-match late in ballgames with lefty-specialist Marc Rzepczynski dominating left-handed hitters to the tune of a .469 OPS against.