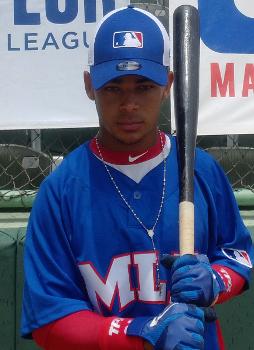 MLB.com's list go the top 30 prospects available for the July 2 signing period can be found here, and if you have a subscription to Baseball America, you can find Badler's list here.

Aracena, born in 1997 yet somehow no longer an infant, has drawn comparisons to Marlins shortstop Rafael Furcal. Most of that comparison comes from his size. He's 5'7" and 175 pounds, which is Jose Altuve territory -- though Aracena has about two inches on the Astros' second baseman.

He's advanced for his age. Badler reports that "scouts marvel at how polished and instinctive he is in all facets of the game" and that he has a chance to stick at shortstop because of his arm strength despite a seemingly natural fit at second base.  He's a switch hitter with a small strike zone that he "doesn't expand by chasing [pitches out of the zone]."

Aracena is considered by both Badler and Sanchez to be the most talented Royals target in this year's class.

Getting excited about 16-year-old baseball players is a good way to set yourself up for disappointment, but Aracena might be a guy to watch in 2023 -- assuming the earth hasn't already been scorched into a charcoal brick by the sun.