Assessing the Royals chances at an All-Star nod

Let's take a look at our deserving Royals All-Stars and who might get tabbed to appear at the All-Star Game in Minneapolis.

Share All sharing options for: Assessing the Royals chances at an All-Star nod

The All-Star teams will be announced tomorrow evening, and with no Royals likely to be voted in, we will have to count on American League manager John Farrell and the player's ballot to get our deserving Royals sent to Minneapolis for the All-Star Game. Let's take a look at our deserving candidates and their competition and being named an All-Star.

Baltimore's Matt Wieters leads the balloting in a tight race over Oakland's Derek Norris, but Wieters will be unable to participate due to injury. Norris will likely be the starter regardless as he's having a fantastic season in a dream season for Oakland. Perez seems like a slam-dunk to be tabbed to be his backup, as he leads his position in WAR, and was already named an All-Star and Gold Glove winner last year. The only way he doesn't get in is perhaps if Kurt Suzuki is named the Twins only representative, and Farrell decides to carry just two catchers.

Conclusion: Count on Salvy being in Minnesota. 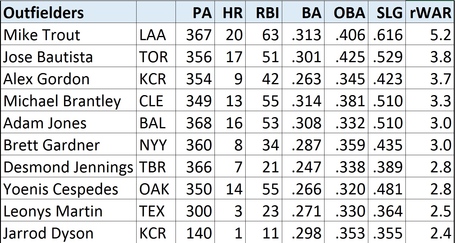 Mike Trout and Jose Bautista will easily get voted in, the question is whether the third voted starter is Melky Cabrera or Yoenis Cespedes. Cabrera is 24th among American League outfielders with 1.1 rWAR, although he's having a decent season under more traditional stats. If Cabrera gets voted in, that could reduce the slots available for more deserving outfielders. The electric George Springer of the Astros could also be tabbed as an exciting young player to showcase at the Midsummer Classic. Gordon may not have the flashy offensive statistics as the other candidates, but he was named an All-Star last year, has won a couple Gold Gloves, and is considered one of the best outfielders in the league. It is also interesting Dyson is in the top ten in rWAR, but if he can't even beat out Raul Ibanez for playing time, there is no way he gets named to an All-Star team.

Conclusion: It wouldn't totally surprise me to see Gordon left off, but WAR is a pretty accepted stat now, and even old school traditionalists acknowledge Gordon's superiority on defense. Alex will likely be representing the American League in Minnesota.

Holland has probably been the best closer in the league this year. He's fifth in the league in strikeouts per nine innings, is second in saves, and has just one blown save all year.

Conclusion: Holland is a mortal lock for the All-Star Game.

Derek Jeter leads the voting and will certainly start the game, even if he needs to be pushed out in a wheelchair to do it. There are no obvious candidates on a reserve, and Alcides is just as good a candidate as any. He is fourth in the league in stolen bases with 20 and fourth in doubles with 24. Escobar frequently makes highlight-reel type defensive plays and is having a Gold Glove-caliber season. None of the other candidates are going to be their team's only representative, so the reserve selection should be based completely on merit.

Conclusion: Escobar seems as good a bet as any, and his flashy defense and solid totals in traditional stats (batting average, doubles, steals) make him a likely candidate. My guess is only one reserve is selected, and it will come down to Escobar vs. Alexei Ramirez, with Alexei getting the nod.

Only one of these relievers, if any, will be selected. I don't know what is up with Petricka's odd rWAR total, but he's clearly not that deserving. Davis has the third highest strikeout per nine rate in the league, behind only closer David Robertson and lefty-specialist Andrew Miller. Dellin Betances has the advantage of being a rookie making a big splash for the league's marquee team, the Yankees.

Conclusion: Big Trade Wade gets listed on a lot of "biggest snub" lists.

Remember that some of these pitchers may be unable to pitch in the All-Star game if they pitch the weekend before the game. Jason Vargas is scheduled to pitch the Sunday afternoon before the All-Star break, making it less likely he is named, but Yordano Ventura would be available on full rest. Neither Vargas nor Ventura have the sexy numbers or the pedigree needed to make the All-Star club, but Ventura at least has the exciting narrative of a 100 mph fastball and a brilliant rookie season.

Conclusion: Vargas is named one of the best free agent signings, but will get to spend a few days off that week. Ventura will be "throwing fire" from home that day.

All-Star teams will be announced at 6 p.m. Sunday evening on ESPN.