The Royals head to sunny Florida this week to take on the Rays, which will inevitably lead to discussion on "The Trade", the bold gamble Dayton Moore took in the winter of 2012. In a move to go "all in", Dayton sent the best hitting prospect in baseball - Wil Myers - to the Rays along with pitcher Jake Odorizzi, pitcher Mike Montgomery, and first baseman Patrick Leonard in exchange for pitcher James Shields, pitcher Wade Davis, and infielder Elliot Johnson.

Shields gave the Royals the front-line pitcher they desired, but at a major cost. While Shields was everything the Royals could have hoped for in 2013, giving them 4.1 rWAR, Wil Myers was making the Royals look a bit foolish by winning Rookie of the Year with a line of .293/.354/.478 and 1.9 rWAR with a promising future ahead of him. Jake Odorizzi was also looking very promising in AAA with a 3.33 ERA and a strikeout per inning (Montgomery and Leonard had disappointing 2013 seasons). Meanwhile Wade Davis "the key to the trade" was floundering as a starting pitcher with a 5.32 ERA and -2.1 rWAR.

Flash forward a year later and things have changed dramatically. James Shields has struggled the last five weeks and is now below replacement level with a 3.93 ERA. Wil Myers has been one of the most disappointing players in baseball with a .227/.313/.354 line, and is now on the disabled list. Wade Davis has been dominating as a reliever, perhaps even worthy of All-Star status. Even Leonard and Montgomery have comeback to have solid 2014 seasons in the minors. And Jake Odorizzi suddenly looks like the most promising player the Rays received, putting up 0.8 WAR so far this year with an eye-popping 10.3 strikeouts per nine innings. Baseball is a funny game.

The Rays have had a hugely disappointing year and now stand 41-50, 8.5 games out of first. But don't count them out. In 2011, they were 11.5 games out as late as July 27 and still made the playoffs. The Rays problem has been scoring runs. They are 13th in runs scored despite being fifth in on-base percentage and fourth in walks. Down years from Evan Longoria, Ben Zobrist, and the disappointing season by Myers has made the middle of the Rays order punchless. 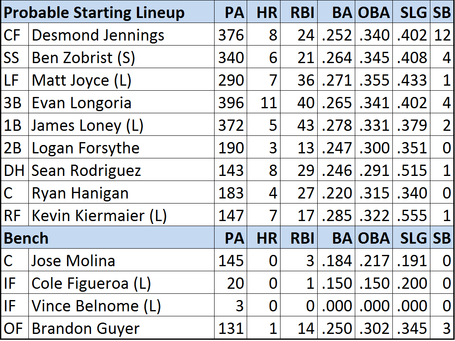 Brandon Guyer will find time in the lineup against lefties replacing Matt Joyce. Kevin Kiermaier has hit surprisingly well since being called up to replace Myers. David DeJesus and Yunel Escobar also sit on the disabled list.

The Rays have the fourth best ERA in the league, but the Royals will miss their two best starters in David Price and Chris Archer. Jake Odorizzi has faced the Royals just twice they sent him away, giving up nine runs in 8 1/3 innings of work. The Rays as a team pitch much better at home, with a 3.49 ERA at Tropicana Field, compared to 4.19 on the road.

The Rays bullpen is in the middle of the league in ERA, but has given up more home runs than any other pen. Grant Balfour, signed to a 2 year $12 million deal last winter, has struggled and lost his closer's role to a closer-by-committee headed by Jake McGee and Brad Boxberger. The Rays have gotten solid performances out of a pair of former Royals pitchers - Joel Peralta and Juan Carlos Oviedo, (a.k.a "Leo Nunez").