Moneyball, schmoneyball, has Billy Beane ever, in a small way, felt like he won a World Series?

Share All sharing options for: Athletics Series Preview: A contrast in styles

The Oakland Athletics have been one of the biggest stories in baseball this year. They have the best record in baseball, and look to be the prohibitive favorites for their first American league pennant since 1990. This is the culminating achievement of Billy Beane's "Moneyball" philosophy, laid out in the book and movie of the same name and misinterpreted by thousands of old school baseball-types. "Moneyball" was never about walks, or scouts, or Scott Hatteberg. It was about finding inefficiencies in the market, zigging while others zag, and challenging all conventional wisdom. Billy Beane has been mocked for being a celebrity General Manager without a championship ring, but Billy may indeed end up with the last laugh.

In sharp contrast is our own Royals, who doing things in a very old school, conventional method. This is revealed in the words of Assistant General Manager Dean Taylor, who one of our readers got the pleasure to talk to recently.

He also said statistics is only one of 5 ways that evaluate a player. those being salary, health, mental, stats, scouting. All of those 5 are given equal weight." Then he said this. "We are not the Oakland A's, we are not going to use stats and stats alone to evaluate a player.

Then he joked stating that perhaps they should given Oakland's record.

Hilarious. Yes, why would you want to follow the lead of such an unsuccessful organization like the Oakland Athletics, the team with seven playoff appearances in the last fifteen years and the best record in the game right now?

The A's are 66-41 and have not had a losing streak of more than four games this year. They are 15-10 this month, although they are just 9-8 since a six game winning streak at the beginning of the month. The Royals are facing the Athletics for the first time this year, but dropped five of six to them last year, including a clean sweep in Oakland.

The A's have the most runs scored, the most walks drawn, the second-best on-base percentage, the third-best slugging percentage, and the fourth most home runs. They have struck out the second-fewest times in the league and have the best stolen base percentage, going 60-for-72 (83%) in that department. In short, they are a very good and very balanced offense.

Oakland likes to mix and match their lineup quite a bit, and have just had some roster turnover, so its hard to say what their lineup will be for this series. 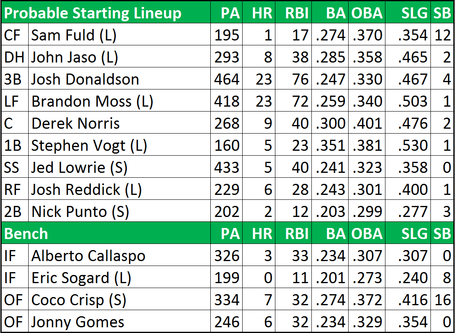 John Jaso and Derek Norris both serve as catchers with Vogt able to fill in on an emergency. Alberto Callaspo has seen a lot of time at designated hitter, although he has had a very disappointing season. Newly-acquired Jonny Gomes will likely play against left-handed pitchers. Coco Crisp has been out for several games with a neck injury and may be placed on the disabled list for this series.

The A's are not an offense-only club by any stretch, their pitching is near the top of the league as well. They allow the second-fewest runs in the league and issue the third-fewest walks. Their strikeout rate is actually below league average, but addition of Jon Lester and Jeff Samardzija to their rotation should help that.

Oakland relievers have the second lowest ERA among all bullpens. They have the third worst strikeout per nine rate, but lead the league in strikeout-to-walk ratio because of how few free passes they give out. The bullpen has excelled despite huge transaction flops like the acquisition of closer Jim Johnson and free agent signing of Eric O'Flaherty. Former first baseman Sean Doolittle has emerged as the closer with an insane strikeout-to-walk ratio of 69-to-4. Former All-Star closer Ryan Cook is now in a setup role but pitching well, with Dan Otero also available from the right side. O'Flaherty is finally healthy and available from the left-side, with the very effective Fernando Abad also available against lefties.