Welcome to Kansas City, where we know BBQ, how to treat Koreans, and beating up on National League West teams.

Share All sharing options for: Royals Rumblings - News for August 11, 2014

Sam Mellinger says the Royals may have their sights set higher than a Wild Card.

There is a convincing case to be made that the Royals — the Royals — should be thrilled with a playoff spot, any playoff spot, even if it ends up being one game on a weekday afternoon in Anaheim. It is generally a bad look for a homeless man to turn away a steak because it’s overcooked.

But there is more to focusing on the division than the idea that if you aim for the stars you can land on a cloud.

The Royals absolutely should be thinking about the division first, and second wild card … um, second?

That’s what they’ve been telling anyone who asks, and if it sounded like company line stuff, the scene in the clubhouse tells a strong story and the look of the standings legitimizes the whole thing.

Saturday morning, an alarm went off at the Toronto hotel where the Tigers are staying. Foreshadowing, perhaps? The Royals have won 14 of their past 17 games, they play Detroit six more times in September, and stand in a good position to derail all of the Tigers' big plans.

Speaking of the Tigers, they placed pitchers Anibal Sanchez and Joakim Soria on the disabled list. Anibal could miss a month of action.

Craig Brown at Royals Authority points out the Royals are pretty much doing what they did last year, but Detroit is the one that is worse.

The difference is, this stretch comes when other flawed teams are actually losing (or not winning as much.) So the Royals have been able to push to the front of what really is a mediocre pack and place their grip on the second Wild Card. And now, with the Detroit bullpen doing Detroit bullpen things, the Royals have somehow closed the gap between first and second in the AL Central to a mere 1.5 games. And that’s why this year feels different. Last summer when the Royals got hot, they couldn’t get closer than 6.5 games back of Detroit.

On Saturday, the Royals won their 62nd game of the year. Their record is 62-53. Last year, at a similar point, their record was 62-54. The difference? The standings. Last year at this time, the Royals were 6.5 games behind Detroit in the Central. And they were four games out of the Wild Card. This year, they are in place in the second Wild Card and they are making life extremely uncomfortable for the Detroit Tigers. Funny how that happens.

Even Rob Neyer is on the bandwagon. I think.

Lee Judge has some praise for Jarrod Dyson's defense.

It was pretty hard to miss Jarrod Dyson on offense — three hits, three stolen bases — but he was even more spectacular on defense. If you watched the game on TV, you probably didn’t see where Dyson was positioned before he started running after a fly ball, but in some cases he was starting in one gap and making the catch in the other.

After the game, I asked starting pitcher Danny Duffy how many runs Dyson saved on Sunday afternoon. Danny laughed and said, "About eight."

Greg Holland picked up his 100th career saves on Saturday night, the third-fewest save opportunities anyone has ever needed to reach that number.

Cheslor Cuthbert could be a September call-up as "Hosmer protection."

Did the A's and Tigers make a big unnecessary gamble at the trade deadline?

Race car driver Tony Stewart ran over and killed fellow driver Kevin Ward, Jr., in a race on Saturday night after a confrontation that led Ward to walk out onto the track with fatal results.

What makes Nigel Richards the best Scrabble player on earth? The Will to Win.

Finally, a big shout out to all that came out to the Royals Review impromptu meetup Saturday evening. It was great to meet so many rabid Royals fans and fellow critical spirits. 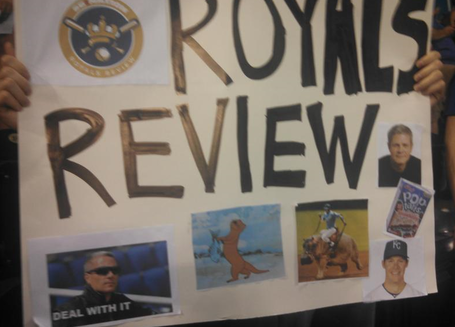 You guys are all my best friend now. Your song of the day is Queen's "You're my Best Friend."