We may be looking at two playoff teams squaring off.

Share All sharing options for: Athletics Series Preview: A glimpse at October?

This week could give Royals fans their first taste of what a playoff atmosphere looks like as the first-place Oakland Athletics come into town to face the red-hot Royals. The Royals already have a 1.5 game lead on the Wild Card spot, and sit just a half-game back of the Detroit Tigers for first place in the Central Division. Heck, if you want to be really greedy, the Royals are just 3.5 games back of the Baltimore Orioles for home field-advantage for the first round division winner.

The Royals took 2 of 3 from the Athletics in Oakland last weekend and haven't lost since. The A's have played well since then too, taking five of seven from the lowly Rays and Twins. They still feature the league's best offense with 4.9 runs per game. They draw the most walks, hit the fourth-most home runs, strike out the second-fewest times in the league, and have the highest success rate at stolen bases.

Oakland has Coco Crisp back in the lineup, although he is still spending some time at designated hitter. Jed Lowrie is battling a finger injury and Oakland could rest him a bit in this series. As always, the Athletics lineup varies quite a bit game-by-game. 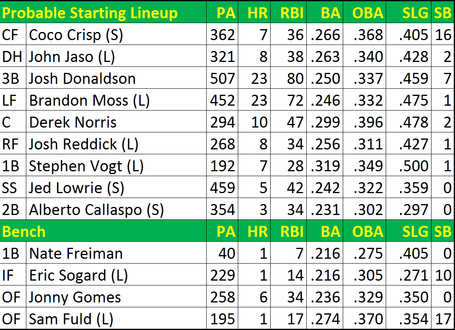 The A's have a pitching staff designed for short series, and the Royals will have their hands full with the arms Oakland sends out this week. Jon Lester tossed a three-hit complete game shutout his last time out, after defeating the Royals last Saturday. The Royals will get their first look at Jeff Samardzija as a starter, his only other appearance against them was as a relief pitcher with the Cubs, where he allowed a run in one-third of an inning.

The A's pitching staff has allowed the second fewest runs in the league and have since added two of the best pitchers in baseball. There is little respite for Royals hitters in the late innings either, as Oakland relievers have the second-best ERA among all bullpens, and the best strikeout-to-walk ratio. Closer Sean Doolittle continues to have an amazing season with a 2.44 ERA and a staggering 73 strikeouts and four walks in 51 1/3 innings pitched. Ryan Cook, Dan Otero, and Luke Gregerson have all been nails from the right side with Eric O'Flaherty and Fernando Abad pitching from the left side.

Big games, high stakes. Are we ready to have some fun?