With the Royals playing the last place Twins and the Mariners and Tigers beating up on each other, now is the time to create some distance between us and our challengers.

Share All sharing options for: Twins Series Preview: Return of the Willing Ham

The Twins are a lousy team - their 54-65 mark is the third worst in the league. However they have split twelve games with the Royals this year, including four of six at Target Field. The team that swept the Royals back in April is a far cry from the team the Royals will face this week though. Gone are veterans like Kendrys Morales, Sam Fuld, and Josh Willingham. Willingham will be suiting up against his former mates this series, a lineup full of young, unproven players.

The Twins are eighth in the league in runs scored, just ahead of the Royals at 4.20 runs per game. They do a decent job getting on base and are third in the league in walks, but like the Royals suffer from a lack of power. Brian Dozier accounts for much of the team's pop, hitting 20 of their 92 home runs overall. Rookie Danny Santana has been a very pleasant surprise, and his 2.2 rWAR is third in all of baseball among rookie hitters despite playing just 61 games so far, behind only White Sox slugger Jose Abreu and Rays outfielder Kevin Kiermaier. 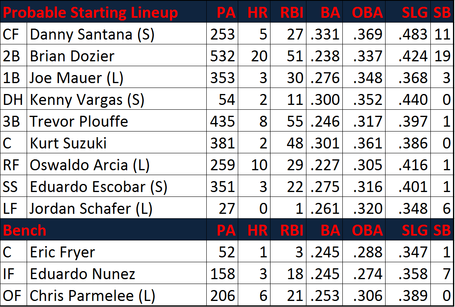 The Twins pitching staff has been a bit of a mess the last few years. They added free agents Ricky Nolasco and Phil Hughes this past winter and while Nolasco has flopped, Hughes has flourished allowing fewer than one walk per nine innings. Nolasco returns from the disabled list to start on Friday. Rookie Trevor May makes just the second start of his career on Monday, after giving up seven walks in two innings against Oakland in his first start.

Twins relievers have the lowest strikeout rate in the American League. They've gotten some good performances however, notably from All-Star closer Glen Perkins and lefty-reliever and former Cornhusker Brian Duensing. Casey Fien and Jared Burton are right-handed relievers available late in games, while lefty reliever Caleb Thielbar has a reverse split this year.