The Royals are in first place. Let's get high.

For years the Colorado Rockies seemed like one of the most boring franchises in Major League Baseball. Aside from the occasional star like Troy Tulowitzki (who is so famous even his own marketing department misspells his name), the team seems like it has just revolved anonymous players in and out of Denver. The only pennant in franchise history was fueled by an insane second half capped off by one of the most forgettable World Series ever. The Rockies never seemed to be awful, and they never seemed to be great. You almost forgot they were in the league.

Well this year, they are unquestionably awful. The Rockies are the worst team in the National League, and are barely behind the Texas Rangers in the running for the first pick in the 2015 draft. The team dropped 37 of 53 games over June and July, capped off by the loss of their two best players - Tulowitzki and outfielder Carlos Gonzalez - both of whom are out for the year with injury.

The Rockies lead the league in runs scored, which is no surprise considering where the play - Coors Field. While Coors still uses a humidor to lessen the effects of the thin air on home run balls, the spacious field allows several balls to drop in for hits. The Rockies as a team are hitting .318/.368/.515 with 5.9 runs per game at home, by far the best home numbers in baseball. On the road its a different story, as they are hitting .236/.289/.371 with 3.5 runs per game.

Overall, the club leads the league in home runs, doubles, batting average, and slugging percentage. They are second in on-base percentage, despite the third-fewest walks in the league. Their .278 batting average is 19 points higher than any team in baseball. 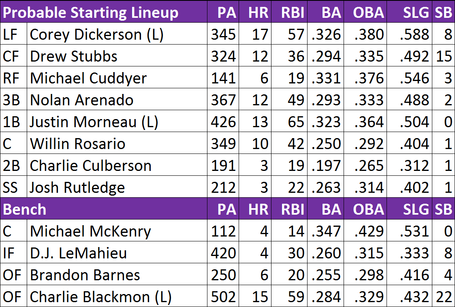 Justin Morneau is recovering from a neck injury and may miss a game from time to time. Michael Cuddyer was just activated from the disabled list after missing three months with a fractured left shoulder. Cuddyer hit for the cycle on Sunday against Cincinnati.

If you surmised that the Rockies problems fall squarely on their pitching staff, you'd be correct. The Rockies have given up the most runs, the most walks, the most hits, the most home runs, and have the fewest strikeouts in the league. Their home ERA of 5.15 is half a run worse than any other National League team home ERA. They have only shut one team out all year, the fewest amount in baseball, and are one of two teams (Cubs) without a complete game this year. Their bullpen has the worst ERA, the most reliever innings, the worst strikeout-to-walk ratio, and the fewest saves. The Royals will face a former first round pick who has struggled mightily this year, and Jorge de la Rosa, a nice middle-of-the-rotation starter who is the Rockies ace. The Royals are essentially playing the 2007 Royals.

Forty-one year old Latroy Hawkins is the Rockies closer, and he has been decent in limited opportunities. He is 18-for-19 in save opportunities with a 2.79 ERA, although he strikes out less than five hitters per nine innings. Boone Logan was a big free agent signing for the Rockies last winter and the lefty-specialist has been a disaster, allowing lefties to hit .310/.362/.548 against him in 24 1/3 innings. Lefty Rex Brothers has a live arm in the pen with nearly a strikeout per innings, but has a 4.93 ERA and walks six hitters per nine innings.

The Royals haven't been to Denver since 2011, but they should make quick work of the Rockies. With Kansas City's excellent defense in the outfield, the Royals seem better suited than most visiting teams to limit the damage of the Rockies lineup. This would probably be a good series to see a lot of Jarrod Dyson and Lorenzo Cain in the outfield, with Nori Aoki's defensive liabilities on the bench.