When the Royals swing, where do they swing?

Share All sharing options for: When the Royals swing, where do they swing?

The Royals are a swing happy team, but fortunately they make a strong amount of contact. As of this writing they are 9th in the league in swing% and 2nd in the MLB in contact%. At one point in the season they were first in both categories, but they've seemed to show some discipline since then. Further on that idea, the Royals have the lowest walk-rate in the MLB too. That's not a great thing to say or see, but given their approach it makes sense. On the other side they also have the lowest K-rate in the bigs too. So while they don't hold back at pitches, they aren't striking out given their high contact rate.

Here are the top-5 teams in K% and their contact% and rank.

As you would imagine, teams with high contact rates generally don't strike out as often as others. For reference, here are the bottom-5 K% teams:

As you see the inverse has been true. Teams with high strikeout rates make less contact. This is an obvious point so it shouldn't be anything new to you or groundbreaking.

So here we don't see any real correlation like the above graphs, but there is something else to this picture. Let's look at swing% as well:

So for the Brewers, Orioles, and Royals it seems like they aren't walking much because they like to be very aggressive at the plate. While with the Diamondbacks they aren't necessarily aggressive at the plate, but perhaps they are fouling off a lot of pitches (contact) which could lead to longer at bats and better counts. Another reason likely is that they are seeing the 4th most amount of pitches in the zone (46.1%) so they are being forced to swing in a way. Obviously pitches in the zone are better to swing at and produce a higher contact rate.

I feel like I'm missing a point here, but let's continue on.

So we know the Royals swing at the plate a good amount, they don't walk, they don't strikeout, and they make a lot of contact. That's all on the macro level, but let's look at where the boys are swinging.

First we'll look at the league average heatmap for both Swing% and Contact%. All heatmaps are courtesy of FanGraphs and are from the batters perspective. 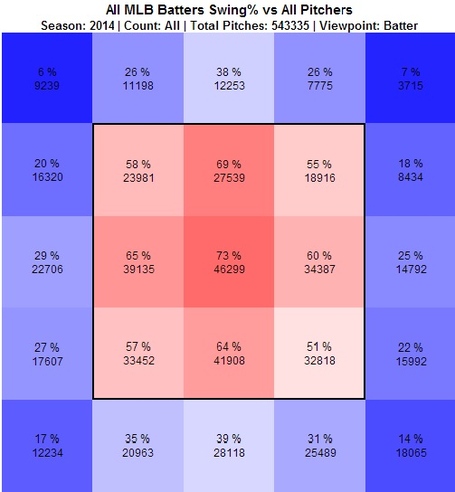 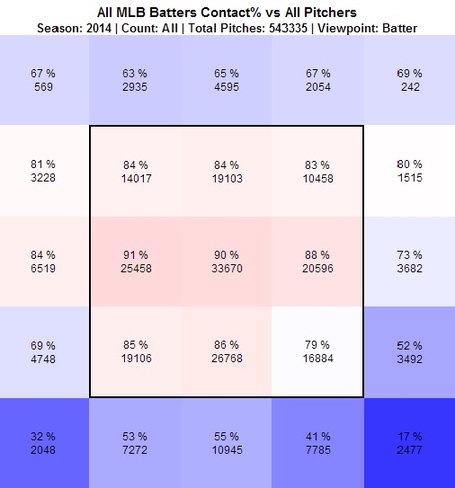 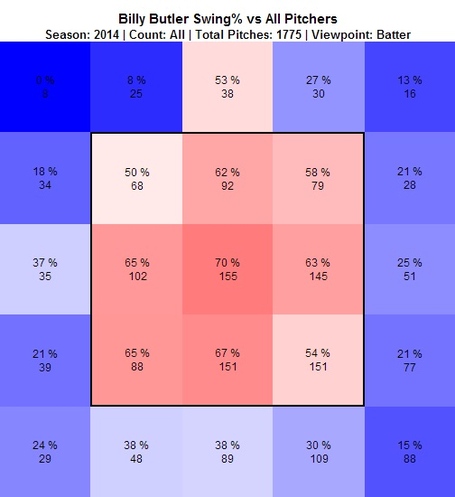 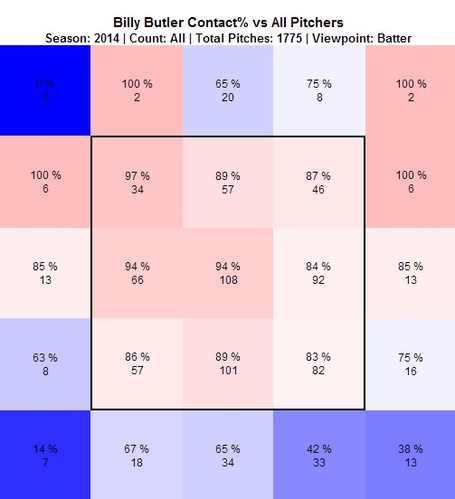 Butler does a good job of not swinging at outside pitches in any direction as evidenced by an almost all blue, mostly a darker shade, boxes on the outside perimeter. One area of weakness for him is middle-high where he swings at an above average rate but makes low average contact. They're both relatively weak shades of blue/red so it might be closer to the average than perceived.

Butler does his best contact up in the zone inside. 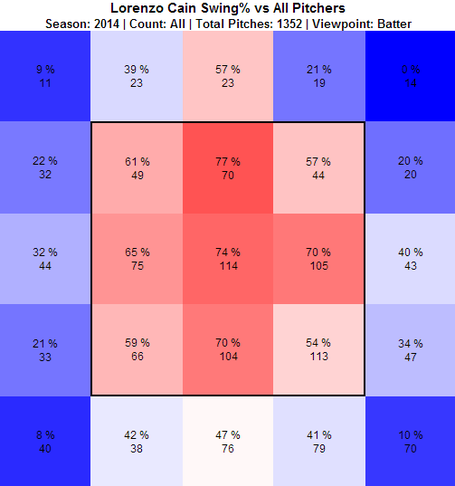 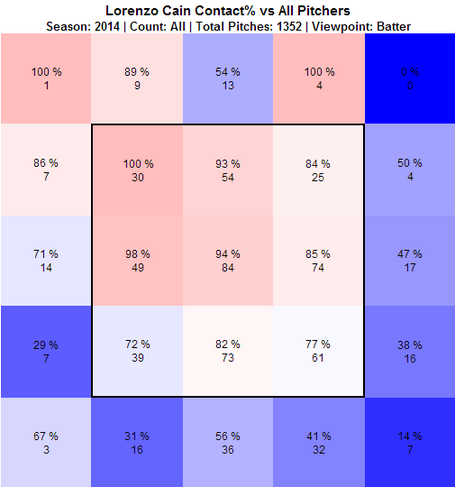 Cain lets it rip when the ball is in the zone, but doesn't make as much contact as you'd like to see for middle-away pitches. As a right handed batter you'd like more contact on the right side of the box there as he's a clip below league average. 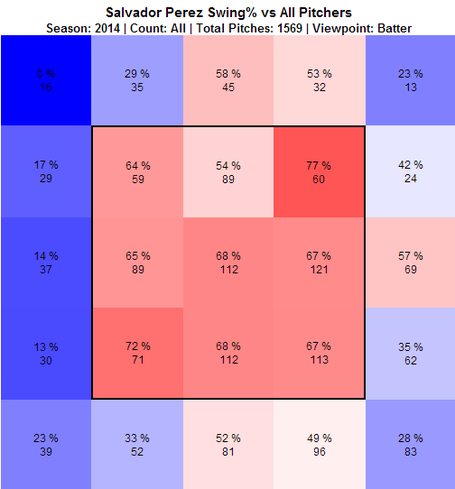 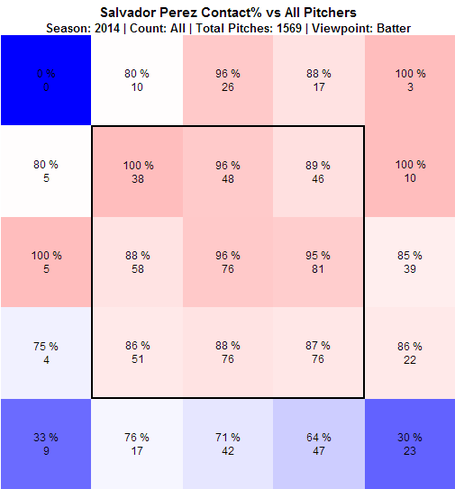 This is the heatmap I was expecting to see with Perez. He has a high swing for contact oriented approach and as the second map shows he makes that contact. He might just have 70-75 grade bat to ball skills. Over the past three years Perez is top 20 in contact%. There's no white in the strike zone, or basically anything away or high. Sal can also recognize the inside pitch and lay off it. 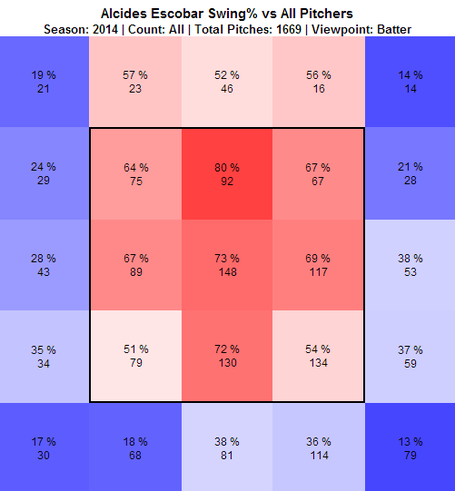 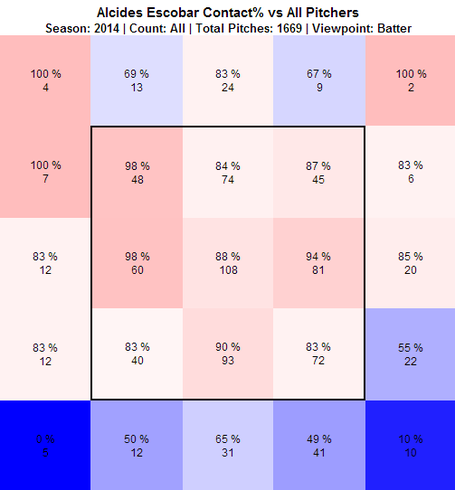 You'd like to see more darker blue shades on the swing side of outside pitches. Seems like low and away and low middle could be a weakness for Escobar. He does make better than league average contact on pretty much everywhere except low pitches. Looks like high and in-zone/out-zone is his sweet spot for contact. 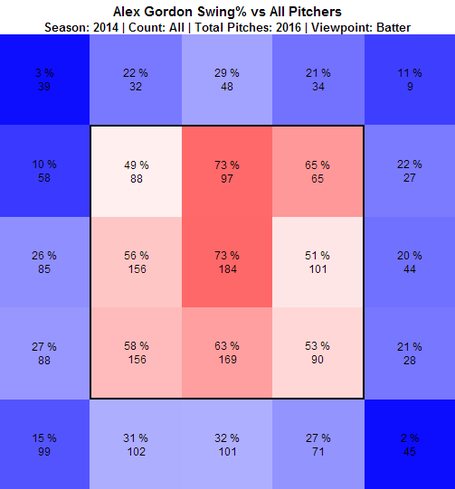 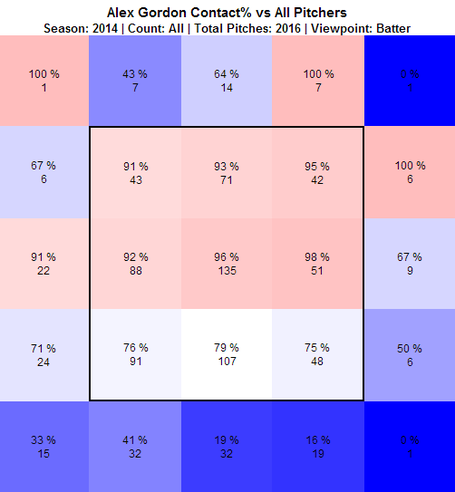 Gordon has a nice swing heatmap. He's below the league average in chasing outside pitches. He's a nice shade of blue in all 16 outside boxes. For a left handed batter with his swing path perhaps you'd like to see him swing more at pitches in the top left corner of the strike zone. On the contact side of things Gordon does well except for low pitches where he's making a worse than league average amount of contact. He doesn't chase that often there as his swing map would show, but when he does chase he's not making a good percentage of contact. 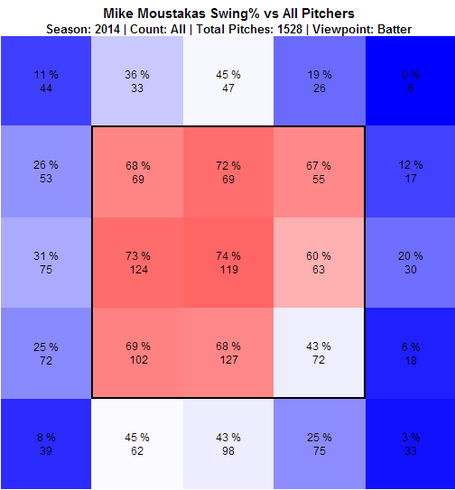 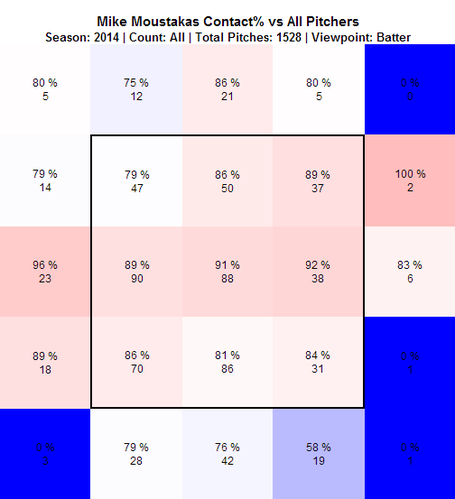 I was expecting this map to be a little different. I was thinking Moose chased outside the zone a lot just from memory, but it's not as severe as I was thinking. He's still loves the middle-high and outside pitch and low-away is a big chase pitch for him. Also Moose has a better contact% than a lot of guys on the team this year. He doesn't swing at inside pitches, but if they are middle-in he can make contact. He does make league average contact on middle-high and high-away pitches. For Moustakas that could be where a lot of his bad contact comes from when the ball leaves the bat. Unfortunately FG doesn't have FB/P data for heatmaps available, but GB/P data is and most of his ground balls come from middle-low and away-low of the zone. 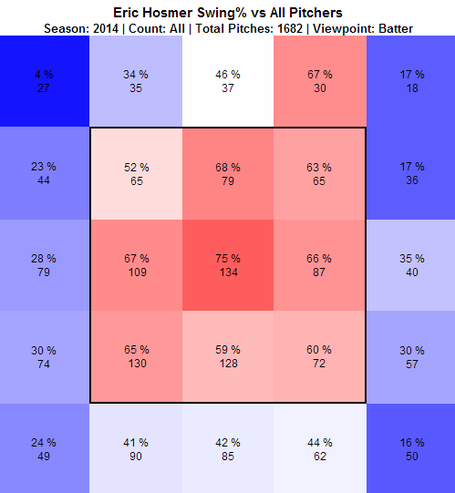 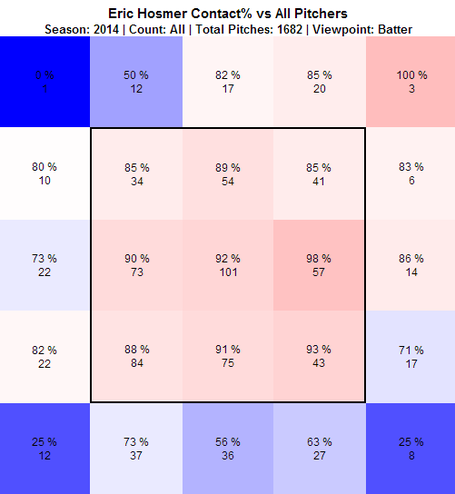 Hosmer likes both middle-low and middle-high, but he doesn't make a strong amount of contact on the middle/inside-low pitches. He does a good job of covering the plate as only really the extreme corners are blue and even the high and inside corner for him is light red. 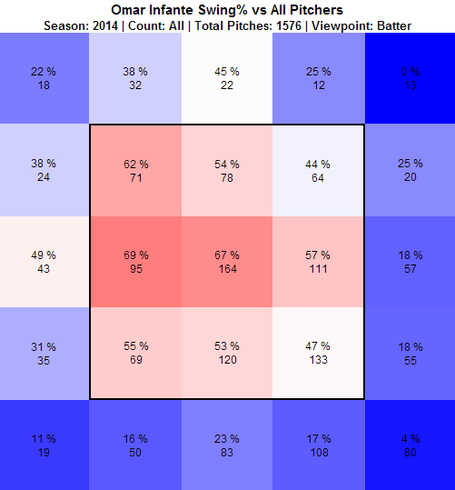 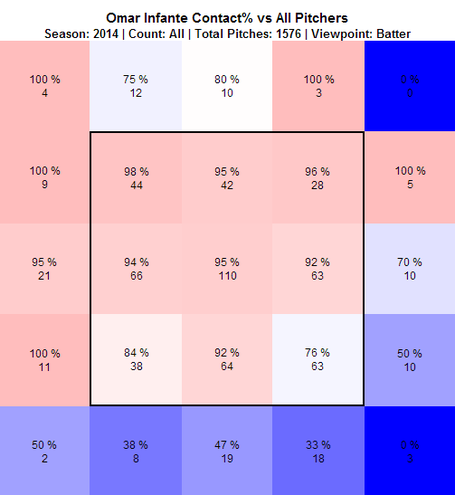 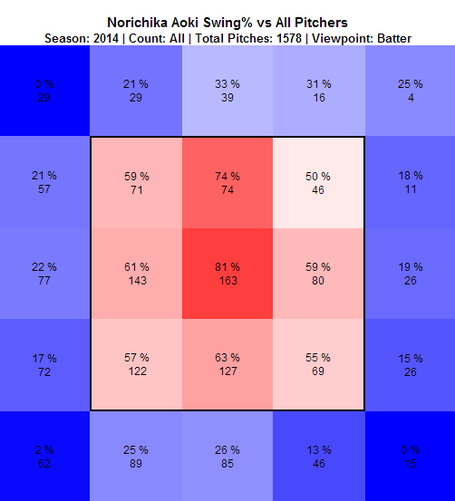 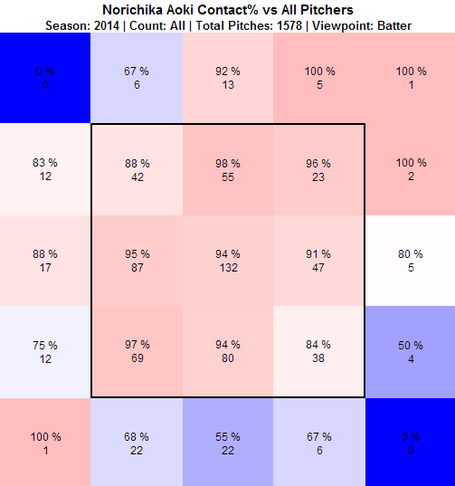 Like Perez, Nori features a contact heavy approach. He's got a real good handle on the strike zone and doesn't chase really anything outside while really pulling the trigger on strikes. When he does swing at outside pitches he makes solid contact on basically everywhere but the high-away and low-inside.

Keep in mind this is all just this seasons data of about 1,600 or so pitches and about 450 plate appearances so these tendencies may not spread over multiple seasons, but that's an article for another day.