The Royals have a fork in the road this off-season they'll now come to. One path leads them to picking up Butlers option for $12,000,000 next year. The other leads to them declining the option. Each fork then has their own fork (so it's kind of like a Swiss army fork). If they pick up Butler's option (which isn't cheap) then he's either worth or relatively worth his contract, or he's bad an under-performs his contract. If they decline his option then they are missing a major league DH/1B with really no real internal candidates (unless you think Cheslor Cuthbert can hit 120 wRC+ at the major league level...which he can't). Maybe I'll continue this piece as a possible series, but for now I just want to look at one player who could fill the shoes of a Billy Butler.

His name is Evan Gattis. You probably knew this from the article title so I'm not impressed. Gattis has an interesting story behind him. At a young age he played baseball on the same All-Star team as Austin Jackson and in circuits with Billy Butler (see how great this narrative is going). He accepted a scholarship to Texas A&M but domestic problems and drug abuse ruined his collegiate and professional career. Gattis bounced around from parking vallet, a ski-lift operator, pizza guy, janitor, and the a Yellowstone Park employee.

At the age of 24 Gattis would enter college and hit like A) what you would expect a 24 year old to hit against college players and B) live up to his pre-draft tools. Gattis was selected in the 23rd round by the Braves and hit his way through the minors, again as you'd expect a 25/26 year old to do. He wouldn't make a Braves top-10 prospect lists but John Sickels cited

11) Evan Gattis, OF-C, Grade C+: Borderline B-. I have really struggled with this grade. I believe in the bat, but at age 26 it is difficult to grade and rank him. You can make a case to place him as high as 7th with a B- grade. This is quite preliminary and I may bump him up by book time.

An injured Brian McCann and Jason Heyward allowed Gattis to receive a large amount of playing time his rookie season and except for a 4 game stint this year, Gattis hasn't returned to the minors since. Over his basically 200 career games he has a 121 wRC+ and so far this year he has a .277/.329/.516 and 135 wRC+ while being worth three wins.

Gattis is a very different case from most guys, but for this articles hopeful prosperity sake let's look at 26 year old rookie catchers who got >350 plate appearances since 1980:

So not a lot of awesome players there other than Hoiles and Jaso.

Here's how those guys did their age 27 year:

And to continue the trend, let's look at age 28 as well:

Gattis is different from most of those guys. Jaso is below average behind the plate and walks more than he strikes out. Hoiles is close to Gattis offensively but also derives value from being a good defensive backstop.

I'm sure it's been comped before but statistically Mike Napoli is the closest guy I can find for Gattis. Napoli is a slugger and a poor defensive catcher, but he walks a lot more than Gattis, nearly 10% more. Even with a low walk rate, Gattis has hit for more power the past two years, but Napoli has the better wRC+ (132 vs 120) due to his walk rate and OBP.

Now this whole article is hinged upon the idea that the Braves would move Gattis. It's a move that has certainly been rumored and is a possibility. Gattis isn't good enough to stay behind the plate long term. They've tried him in the OF and have seen awful results. He's not an option at 1B either since Freddie Freeman just signed a long term contract and is one of the best young hitters and overall hitters in the major leagues. Also the Braves being a National League team rules out the idea of DH'ing him.

The other piece of the puzzle is Christian Bethancourt the Braves defensive wizard of a catcher. Rumors swirled a bit in June/July about promoting Bethancourt to full time Atlanta back stop and moving Gattis to the OF fully. Those rumors were damped a bit as the Braves front office rightly realized moving Gattis to the outfield would lower his value.

So what could Gattis look like in a Royals uniform?

Gattis is a right handed batter who likes to pull the ball. Below is the spray chart for his home runs and the majority are to left field or left center. Kauffman slightly suppresses right handed home run power (park factor of 97), but his current field, Turner Field, suppresses it even more (93 park factor). Perhaps Gattis could hit for more power at Kauffman, if only slightly, if he were to move. 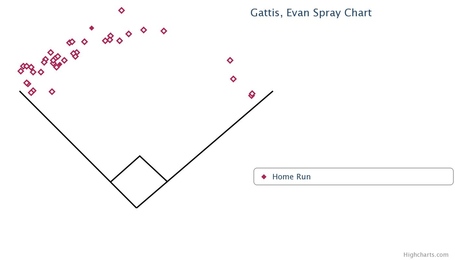 On the financial side, Gattis will enter his first year of arbitration after the 2015 season so he'd have another year at the minor league minimum or so. Gattis has hit for power in his career so he could be due for a nice raise his first year in eligibility if he continues to put balls over the wall.

Using FanGraphs $/WAR value Gattis has been worth ~$20M his career and he's accrued nearly four wins in his first 200 games. There would be a good amount of surplus in his contract for his final pre-arb year and unless he jumps to $10M, which he won't, in his first arb year he could still provide $10M+ in surplus value in 2016 as well.

All of this leads us to the final question: what will it cost the Royals?

I put this question out on Twitter and poked some other baseball writers about what they think would cost for Gattis. The opinion was split. Some thought that a Top-100 prospect like Zimmer/Manaea/Mondesi/Almonte would be sufficient enough while others thought that a combination of B-level guys like Cuthbert and Binford would do the trick.

I'm split on the idea as well. One response, by our own JKWard here, thought Duffy + Binford + Bonifacio would seal the deal and I am in agreement, but think perhaps that might be an overpay.

So I'll leave it up to you guys. The question isn't do you or don't you want Gattis, but what would it take for the Royals to get him?