Rangers Series Preview: Wow, this team got bad in a hurry

Everything is bigger in Texas, even the epic losing streaks.

Share All sharing options for: Rangers Series Preview: Wow, this team got bad in a hurry

Just three seasons ago, the Rangers won 96 games and their second-consecutive American League pennant. The next year, they won 93 games, but lost in the first ever American League Wild Card game. Last year they won 91 games, but lost a one-game playoff to the Rays for the right to even be in the Wild Card game. This year they are the worst team in baseball. Baseball is a cruel sport.

The Rangers are 49-77, but were at .500 as late as June 16. They have lost 42 of their last 56 games. The Rangers have gotten awful in a hurry for one big reason - injuries. Prince Fielder, Mitch Moreland, Jurickson Profar,  Geovany Soto, Yu Darvish, Derek Holland, Matt Harrison, Tanner Scheppers, Martin Perez, and Alexi Ogando were all expected to be contributors this year, and all have missed a large portion or the entire season due to injury.

The Rangers have also gotten hugely disappointing seasons from big free agent signing Shin-Soo Choo and young shortstop Elvis Andrus, who is owed $133 million left on his contract after this season. The Rangers had been thought to have the deepest farm system in the game, but have been reduced to playing anonymous journeymen like Miles Mikolas, Brad Snyder, J.P. Arencibia, and former Royals Donnie Murphy, Kevin Kouzmanoff, and Nate Adcock. They even dragged Carlos Pena off the street and planted him at first base a few games.

The Rangers are eleventh in the league in runs scored, ninth in on-base percentage, and twelfth in slugging percentage. Only the Royals have hit fewer home runs than the Rangers in the American League, and no team in the league has been caught stealing as much as the Rangers. Curiously, they are second in baseball in Ultimate Base Running. 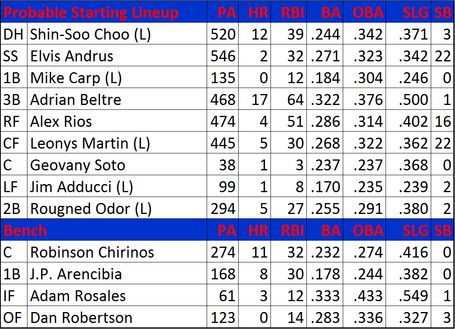 J.P. Arencibia and Dan Robertson will come in for Mike Carp and Jim Adducci against left-handers. Third baseman Adrian Beltre is still a fantastic player, one of the best in the league, having a 5.6 rWAR (4.3 fWAR) season thus far. Shin-Soo Choo, in the first year of a seven year-$130 million contract, has been seriously exposed against left-handers this year, hitting just .237/.325/.353 against southpaws.

The Rangers pitching is just a mess. Guys have been shuttled in an out all year, and with Yu Darvish out for the year, they don't have anything resembling a competent starting pitcher aside from maybe Kansas City-native Nick Tepesch. They have given up the most runs, the most hits, the second most home runs, and the third most walks. The Rangers have a 5.06 ERA at Global Life Park, a half-run higher than any other team does in their home ballpark.

The bullpen has fared slightly better than the rotation, but its been a hodge-podge of guys who should probably be bouncing around the Pacific Coast League. Jon Edwards and Phil Klein are controversial politicians who have somehow found their way into the Rangers bullpen. Neftali Feliz returns from almost two years of injuries to assume closing duties from Joakim Soria, who was dealt to Detroit.