The Yankees head to the K tonight for a rare one-game series, thanks to a June 9 rain-out that broke the hearts of Nebraska Yankees fans who had made the three-hour trip to see their favorite player play at Kauffman Stadium for the last time - Derek Jeter. Jeter will instead make his last Kansas City appearance tonight, as the Royals shower him with gifts (burnt ends? Kyle Snyder's ulnar collateral ligament? The phone number of a waitress at the Hooters in Independence?)

The Yankees have over-achieved all season, as their pythagorean win-loss record is 60-68. They are 21-16 in one-run games this year. It should be no surprise that the Yankees field the oldest lineup in baseball, with the average Yankee hitter being close to 33 years old. Also unsurprisingly, the Yankees lineup has been afflicted with injuries and ineffectiveness. The team is second-to-last in runs scored, twelfth in on-base percentage, and tenth in slugging. Surprsingly, the team is second in steals, although 60% of their swipes have come from Jacoby Ellsbury and Brett Gardner. 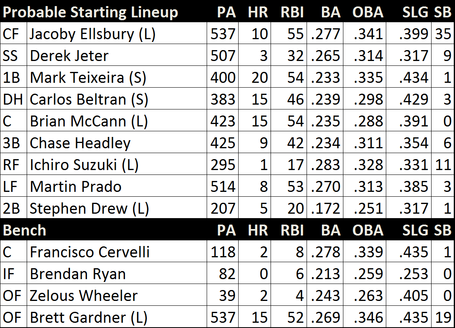 Gardner is nursing an ankle injury and is said to be doubtful for tonight. Martin Prado has hit .267/.295/.467 with 3 HR in 21 games since being acquired from Arizona. Chase Headley got off to a good start with the Yankees after being traded from the Padres, but is hitting just .217/.341/.304 in his last 20 games.

Michael Pineda, acquired from Seattle for Jesus Montero in 2012, is finally healthy after missing the last two seasons following Tommy John surgery. Pineda has still missed most of this season after injuring his back in late April, but has returned in August to give up just six hits and three runs over 11 innings in two starts. Pineda has been effective overall, although his success may not be completely on the level.

Yankees relievers strike out over ten hitters per nine innings, the best mark in the American League. As a group, they have a 3.89 ERA however, good for just tenth in the league. Set-up man Dellin Betances has been one of the best relievers in baseball this year with a 1.42 ERA and an absurd 113 strikeouts in 76 innings. Closer David Robertson has also struck out over 13 hitters per nine innings, and has a 3.06 ERA with 34 saves in 37 opportunities. Former Indians relievers David Huff and Rich Hill are options for manager Joe Girardi against left-handed hitters.