The Royals have lost two games in a row. TIME TO PANIC!

Share All sharing options for: Twins Series Preview: Time to right the ship

The Royals have lost two games in a row for the first time since July 29, and while some of us jaded fans may be worried that this is the sign of the apocalypse, the fact is good teams lose two games in a row all the time. What they also do is right the ship quickly, especially when they face inferior opponents. The Royals begin a three game home series against the Twins tonight

The Twins have had a disappointing season and are 58-72, but have played the Royals tough winning seven of sixteen contests. The Royals have taken five of the last seven games against the Twins, and are 4-2 against Minnesota at the K this year. The Twins have traded off a few hitters like Royals slugger Josh Willingham, as well as Sam Fuld and Kendrys Morales, and their hitters are the third youngest in the league. Nonetheless, they have done a good job scoring runs, and are fifth in the league in runs scored at 4.38 runs per game.

Twins centerfielder/shortstop Danny Santana continues to have an outstanding season, and is third among American League rookie hitters in rWAR at 2.3. His .324 batting average is the highest by a rookie since Mike Trout hit .326 in 2012. Eight of the nine hitters in the regular lineup have an OPS+ over 100 this year, and even Jordan Schafer has performed well since joining the Twins, hitting .303/.403/.415 since being picked up off waivers from the Braves. 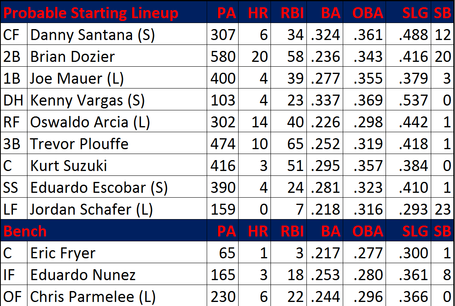 The Twins are third in on-base percentage, second in walks, and eighth in slugging percentage. They are third in doubles, with Brian Dozier and Eduardo Escobar in the top six in the league in two-baggers. Outfielder Oswaldo Arcia has been on a power tear with seven home runs in his last 17 games.

The Twins pitching has been their weakness, although they have a 3.88 team FIP to a 4.47 team ERA, suggesting their defense could be to blame. In particular, starters Ricky Nolasco and Phil Hughes have drastically underperformed their FIP. The Twins rely more on their defense than other teams, with the lowest strikeout rate in the league. On the other hand, they have the second lowest walk rate.

Twins All-Star closer Glen Perkins continues to have a strong season with a 2.44 ERA and 32 saves in 36 opportunities. Casey Fien and Anthony Swarzak have been fairly effective from the right-side. Lefty-reliever Brian Duensing attended the University of Nebraska with Royals left-fielder Alex Gordon, if you haven't heard Ryan Lefebvre mention that a million times in the past.