For the first time since 2001, Kansas City is hosting Sunday Night Baseball. Let's put on a show.

Share All sharing options for: Indians Series Preview: ESPN is coming to town!

The Royals have graced the cover (regionally, at least) of Sports Illustrated, had articles debating the MVP-candidacy of Alex Gordon, and made the New York Times when their #1 fan made the trip from South Korea to watch the beginning of the hottest streak the club has seen in two decades. Naturally, the World Wide Leader in sports wants a piece of the action, and Kansas City will host ESPN's Sunday Night Baseball for the first time since 2001 when the Indians come into town this weekend.

Despite trading one of their starting pitchers and their starting shortstop at the trade deadline, the Indians have still kind of lingered at the fringes of contention. They are 68-64 this year, just four games out of a Wild Card spot, and have won eleven of their last sixteen games. The Royals have edged the Indians 7-6 in their matchups this year, recently taking two of three at Kauffman in late July.

The Indians are sixth in the league in scoring with 4.30 runs per game compared to the Royals 4.13. They are pretty much middle of the pack in every offensive category - sixth in on-base percentage, seventh in slugging percentage, sixth in home runs, fifth in walks. They are a slightly worse team offensively away from Progressive Field, hitting .250/.317/.389 on the road.

Michael Bourn returns after missing time with a hamstring injury and Yan Gomes is expected to be activated after a stint on the 7-day concussion disabled list. The Indians are without Ryan Raburn (and his brilliant defense), and Nick Swisher, David Murphy. Lonnie Chisenhall, who got off to such a sizzling start, is hitting just .209/.288/.325 over his last 59 games. Michael Barntley is having an extremely underrated season, and is a stealth MVP candidate. 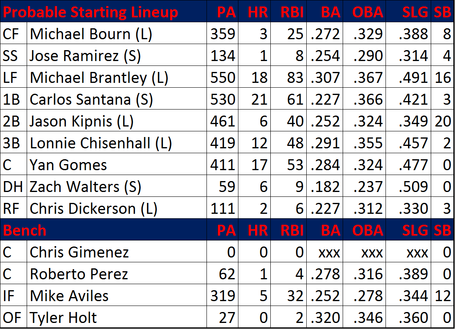 Indians relievers have the second best ERA among American League bullpens, and are fifth in strikeouts per nine innings at 8.8. Cody Allen has settled into the closer role with a 1.71 ERA and 18 saves in 19 opportunities. Lefties are hitting just .159/.213/.182 against southpaw specialist Marc Rzepczynski, and haven't fared much better against lefty relievers Nick Hagadone and Kyle Crockett, both of whom have a sub-.600 OPS against lefties.