The Diamondbacks emphasize grit, character, and playing baseball like a man. They have the fourth worst record in the league.

Share All sharing options for: Diamondbacks Series Preview: A team in disarray

The Diamondbacks are frankly an organization in disarray. After a 94 win-season and playoff berth in 2011, followed by back-to-back .500 seasons, the franchise hoped a major turnover of the roster would kick-start them back into contention. Gone are players like Chris Johnson, Justin Upton, Tyler Skaggs, Trevor Bauer, Adam Eaton, and Ian Kennedy. In their place, the Diamondbacks seemed to want to pursue "their" kind of player. And it has largely blown up in their face. The Diamondbacks are currently 49-63, the fourth worst record in the National League.

General Manager Kevin Towers may or may not be in charge after the hiring of Tony LaRussa. The face of the franchise is now manager Kirk Gibson, whose bulldog mentality has come under some criticism after he ordered Pirates outfielder Andrew McCutchen to be plunked in retaliation for an accidental beaning of Diamondbacks star first baseman Paul Goldschmidt that will cost him the rest of the season. Gibson reflects the organization's old school, character-first mentality that reminds me of the Royals in their bottom-feeding days, stressing style over substance.

After trading veterans Gerardo Parra and Martin Prado at the trade deadline, and losing Paul Goldschmidt for the season, the Diamondbacks field a lineup full of unproven players, has-beens, and waiver wire pickups. They are seventh in the National League in runs scored at 3.99 per game, although that largely reflects their lineup with those three players. The team is dead last in walks, but tenth in on-base percentage, and sixth in home runs. 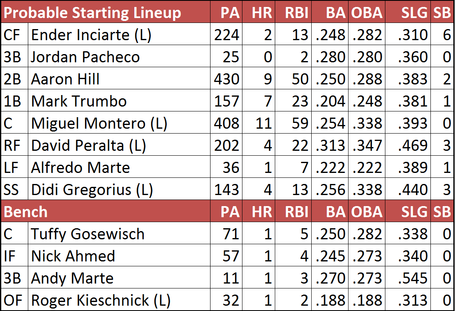 Yes, that's former uber-prospect Andy Marte, back in the big leagues after seemingly flaming out several years back. Outfielder A.J. Pollock joins Goldschmidt on the disabled list, although he is expected to return soon. Outfielder Cody Ross and infielders Chris Owings and Cliff Pennington are also on the disabled list. Third baseman Eric Chavez recently retired rather than play out the string.

Only the Colorado Rockies have given up more runs than the Diamondbacks in the National League, and Arizona has traded starting pitcher Brandon McCarthy and lost Bronson Arroyo to injury. Former All-Star Wade Miley has had a solid season for Arizona and Vidal Nuno has impressed since coming over from New York in the McCarthy deal.

The Diamondbacks have the third-worst bullpen in the league by ERA, although they have the second most strikeouts per nine innings. Former starting pitcher Trevor Cahill has been demoted to the bullpen and has pitched well with over 10 strikeouts per nine innings. Closer Addison Reed, acquired from the White Sox last winter, has been inconsistent this year, but has been solid lately, giving up just one run over his last 8 2/3 innings, and has converted 27 of 32 saves opportunities overall. Odessa, Missouri native and submariner Brad Ziegler has had a solid season as a setup man, although he has a reverse split this year, as does left-handed reliever Oliver Perez. The rest of the Diamondbacks is very young and inexperienced with guys like Bo Schultz, Matt Stites, Evan Marshall, Eury de la Rosa, and Randall Delgado.