Its so hard to say goodbye...to yesterday.

The trade deadline was littered with headline-making trades from the Red Sox dealing Jon Lester to Oakland to Tampa Bay dealing David Price to Detroit. Those long-time players took to the local newspaper to thank the fans, as Lester took an ad out in the Boston Globe to thank Red Sox fans and David Price took out at an ad in the Tampa Bay Times thanking Rays fans.

The Royals were quiet at the trade deadline, but earlier in the week had already made a move sending third baseman Danny Valencia to the Toronto Blue Jays in exchange for catcher Erik Kratz and pitcher Liam Hendriks. Not to be outdone, Valencia recently took to the pages of the Kansas City Star to express his thanks to Royals fans for a magical ride. 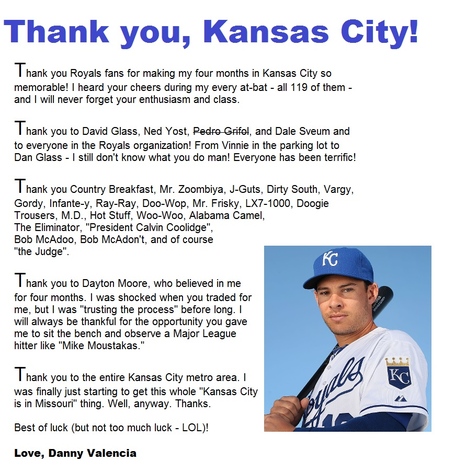