The organization believes Moustakas has turned a corner of some kind. He's definitely turning something.

With Danny Valencia taking the last escape pod to a foreign country, the Royals have given an implicit vote of confidence in Mike Moustakas' bat. I'm pretty sure Yost said at some point that Moustakas still won't be the every day third sacker, but does anyone really think that Christian Colon is going to take plate appearances away from Moustakas?

There is an interesting trend happening with Moustakas, though. I'll be pulling data from FanGraphs* to show some things that may or may not be related to his performance this year. Probably related. Like that cousin who doesn't look like you but everyone insists is related.

*All data current as of the morning of Aug 5th

First, Moustakas is pulling the ball more. Check out this pretty graph. 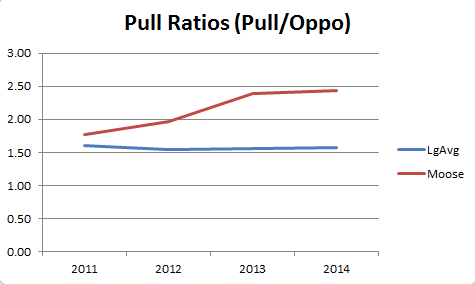 Indeed, Moustakas pulls the ball more than league average, and he's doing it more than ever this year. Pulling the ball in the air is good. Balls go farther. Pulling the ball on the ground is bad. That leads to putting an extra body in holes that are normally open. Over the same time period, let's look at Moose's production on fly balls and ground balls. 100 is average, and I used the formula (1.7*MooseBA + MooseSLG)/(1.7*LgBA + LgSLG)*100. 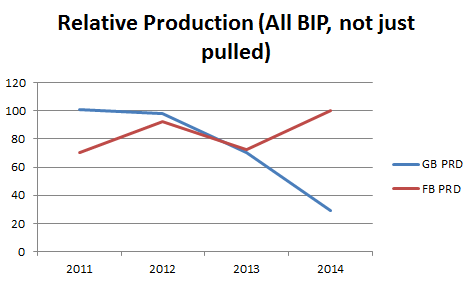 That's fairly interesting. As his pull ratio has increased, his production on ground balls has decreased. Unfortunately, as players try to pull the ball in the air more, that usually results in more ground balls being pulled. Shifts! Moustakas has six (6) hits on ground balls this year as of yesterday. God. Awful.

However, as his pull ratio has increased, there hasn't really been any relationship with his production on fly balls. It's just scattered about like a confused kid at a junior high dance. What's going on here? I'll turn to batted ball distributions to help out. Another trended graph incoming. 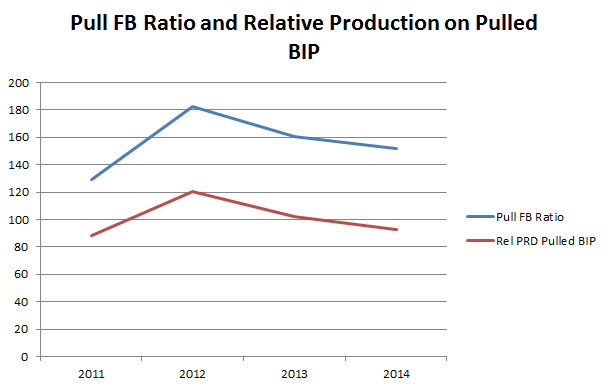 The blue line represents the ratio of Moose's pulled FB% to league average. The red line is Moose's relative production on pulled balls in play. Again, 100 is average. According to the above graph, Moose's production on all pulled balls is directly correlated with the amount of fly balls he hits in the pull direction. That makes quite a bit of sense. However, notice that the pulled FB% ratio is decreasing. Moustakas is 1) pulling the ball more, and 2) hitting more of those pulled balls ON THE GROUND, where those balls are USELESS.

The only reason I can glean that Moustakas' production on fly balls is better this year than any other year is because his HR/FB (among only pulled balls) has increased to 1.27 times the average. Another graph. 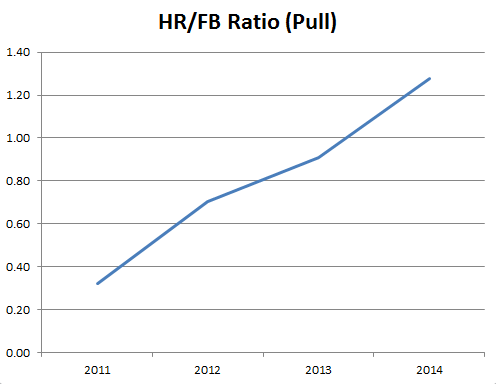 Moose has actually trended upward in this regard relative to the league average. Is it possible that he is impacting the ball harder? His relative production numbers don't say so, but this is where I turned to Baseball Heat Maps, Jeff Zimmerman's website, to grab average batted ball distance for Moose's fly balls. There isn't perfect agreement on what a fly ball is, but hopefully the trend will be illustrative. 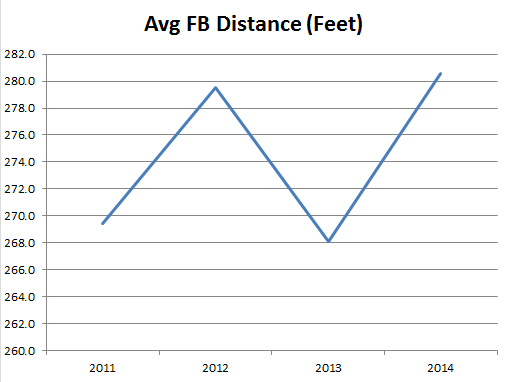 That was a lot of data. What's the useful stuff from all this?

1) Moustakas is pulling the ball more

2) More of Moustakas' pulled balls are becoming ground balls, which is holding down his production

3) When Moustakas pulls the ball in the air, he can still do significant damage 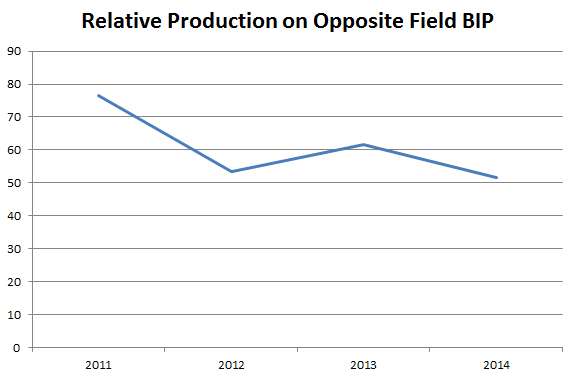 5) If this is his maximized skill set, there will never be a corner to turn. He is who he is.