Giants Series Preview: This weekend should be fun

Share All sharing options for: Giants Series Preview: This weekend should be fun

Interleague play is back this weekend at the K, and this weekend lends further intrigue as it features two teams still fighting hard for a playoff spot. The San Francisco Giants were riding high a few weeks ago, and had the best record in the National League on July 23. Since then, they've dropped 9 of 14, including a six-game losing streak and stand 62-53, 3.5 games back of the Dodgers for the Western Division.

The Giants are 7-5 in interleague play this year, having swept the Twins and Indians, but dropping a two game series to the White Sox and three of four to the Athletics. The Royals last played the Giants in 2008 at Kauffman Stadium, where Kansas City took two of three that included this thrilling Sunday afternoon win. Look, a rare Yaz Yabuta sighting!

The Giants have a pedestrian offense, and are ninth in the Senior Circuit in runs per game at 3.90, less than the Royals 4.04 runs per game. They do hit the ball out of the ballpark with five players already in double digits in home runs, and the team is fifth overall in the league in home runs. The Giants aren't particularly patient though and are ninth in walks and eleventh in on-base percentage. Don't expect them to run much, San Francisco is dead last in stolen bases, and only three players have more than three successful steals this year. 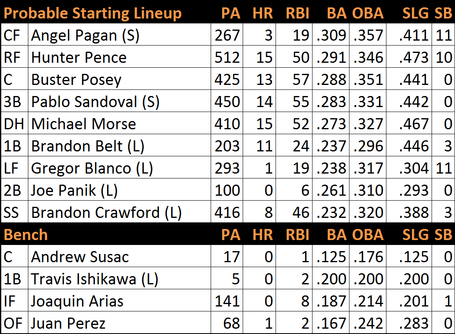 Backup catcher Hector Sanchez could be back from a concussion injury this weekend. Infielder Marco Scutaro has missed virtually the entire season with back issues.

The Giants strength is their pitching staff, which is fourth in the league in runs allowed per game with 3.61. Matt Cain is likely out for the year, but the Giants still feature ageless wonder Tim Hudson who is having a terrific season at age 38. Tim Lincecum has declined but can still strike hitters out at nearly one per inning, as can young ace Madison Bumgarner.

Giants relievers have the second-best ERA and second-best strikeout-to-walk ratio among National League bullpens. Sergio Romo struggled with a 4.60 ERA despite a WHIP of 1.00 and 42 strikeouts and 11 walks in 43 innings and lost his closer duties to Santiago Casilla. Casilla has a 1.30 ERA but strikeouts out less than seven hitters per nine innings. Former Royal Jeremy Affeldt has excelled this season with a 1.35 ERA although he has a reverse split against left-handed hitters. Left-handed specialist Javier Lopez is allowing lefties to hit just .194/.231/.306. Former Royal J.C. Gutierrez has also pitched well for the Giants with a 3.04 ERA in 50 1/3 innings.

Sung Woo is in town, Hunter Pence is here to be mocked, Alex Gordon bobbleheads are being handed out, and the Royals are playing like a playoff team. It should be a fun weekend with big crowds, so plan accordingly.