Rosters expand today, and the Royals bring up some of the best the minors have to offer.

Our own Minda Haas tweeted out (go follow Minda on Twitter here)  today's Omaha Storm Chasers roster. While September callups haven't been fully announced yet, due to the vast wonders of the internet and the ability to wildly speculate, we can make some assumptions. 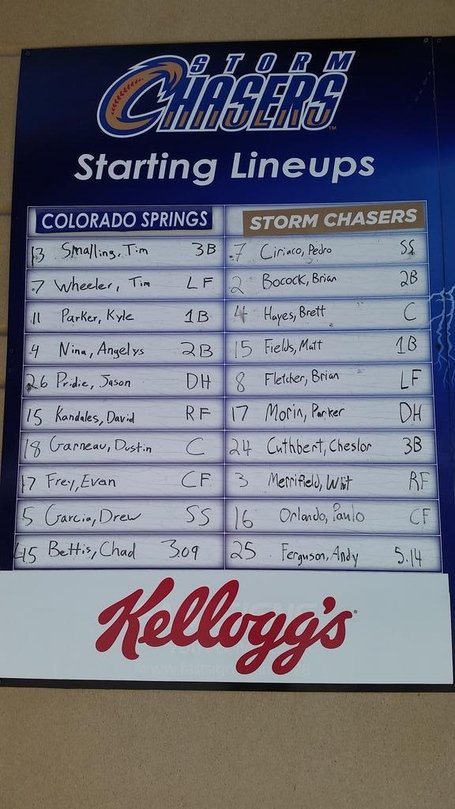 We can notice that Eric Hosmer is not in the lineup despite being on rehab assignment. It was no real mystery that he was going to be called up anyways.

Looks like Johnny Giavotella is MIA as well. He's no stranger to being yo-yo'd from Omaha to KC and I'm sure he's got a couple free flights from Southwest Rewards.

Also missing is catcher Francisco Pena. There was speculation of him being called up. The other missing name is Carlos Peguero.

Not only are all four names not listed, but an inside source has confirmed that none of them are at the ballpark. In other confirmations, Christian Binford is at the ballpark. This doesn't mean he won't be called up, but it won't be today at least.

Also Andy McCullough at The Star weighed in on the impending Brandon Finnegan move and playoff eligibility, as explained by Assistant General Manager Dean Taylor.

Taylor, the former general manager of the Brewers, exhibits a mastery of the league's myriad administrative and procedural quirks. He operates as the front office's safety net. He explained Finnegan could still inherit a spot on the roster claimed by Luke Hochevar, who is currently on the 60-day disabled list as he recovers from Tommy John surgery.

That second player could be Finnegan. It could also, theoretically, be someone like Justin Maxwell or Carlos Peguero. But the Royals are heading into September believing they can still maneuver the 21-year-old southpaw into their bullpen in October.

EDIT: Promotions are official. Royals call up C Francisco Pena, IF Johnny Giavotella, OF Carlos Peguero, OF Lane Adams, P Brandon Finnegan, and P Casey Coleman from the minor leagues, and activate 1B Eric Hosmer from the disabled list. To make room for Peguero and Finnegan on the 40-man roster, P Blake Wood and P Chris Dwyer have been designated for assignment.