Share All sharing options for: Royals Rumblings - News for September 10, 2014

Sam Mellinger writes that the glare of the spotlight really highlighted the Royals blemishes.

That the Royals are here, in first place approaching the middle of September, is a testament to their ability to maximize their significant strengths, minimize their obvious flaws and generally outperform what the statheads say they should be based on run differential.

This is how it’s been all season. That’s been part of the thrill and most of the wonder in watching them avoid all the henchmen. Well, the henchmen took a resounding victory in an awfully inconvenient spot on Monday. This one game showed so much of what the Royals need to be mindful about, resilient against, the blemishes they need to cover with makeup under the bright lights of a pennant race.

Jon Morosi at Fox Sports writes that the Royals face challenges, but the pressure of the pennant-race isn't one of them.

The Kansas City Royals lost the opener of their (first) September showdown series with the Detroit Tigers in the twilight Monday, and some observers will portray the 9-5 defeat as evidence that Ned Yost's charges lack the moxie to complete the job of winning a division title. You will not read that argument here. To wonder whether the Royals are "ready for the big stage" is absurd. After playing 142 games, they have a better record than all but three teams in the American League. The Royals are pretty good. They have proven it....

Usually, five runs would be more than enough for the Royals to win. But now it's September, and their best starter and best reliever are dealing with achy arms. The way the Royals have won for five-plus months may not work quite as well anymore -- and Tuesday is the first of five more tests against the defending division champions.

Jeffrey Flanagan writes that Omar Infante is hurting the team right now, and its time to look at other options.

The question now becomes whether it is worth it to have an 80 percent Infante on the field as opposed to a healthier replacement. At this stage, Yost's options are not exactly great. The loss of Christian Colon (broken finger) handicaps Yost, who now must choose from recently acquired Jayson Nix or the long-forgotten Johnny Giavotella. Nix would be a substantial upgrade defensively over the hobbling Infante, or Giavotella. But Nix isn't likely to bring any offense to the lineup.

Just how bad has it been?  Here are O.I.’s numbers for the year: .254 Batting Average/.290 On Base Percentage/.346 Slugging Percentage; 19 2B, 3 3B, 6 HR, 59 RBI.  The power numbers aren’t god-awful for a Second Baseman but that BA and OBP in the second spot in the lineup?  OI.  His Batting Average on Balls In Play is a low-ish .275 so that might explain a little bit of his dropoff this season.  He’s had some poor seasons before, that were worse than this one, but those were 10 years ago and he’s put up several solid offensive seasons since then to make it seem as though he matured as a hitter and those would not be a problem.

The really fun part about this season, though?  Ned Yost insists on continuing to hit him in the #2 spot in the lineup on a team that is DESPERATE to score runs!!!  In August, he "achieved" a .228/.250/.307 line in 101 At Bats.  Neifi Perez and Angel Berroa are jealous!

CHRIS GETZ IS JUST SITTING AT HOME YOU GUYS.

Tony Blengino at Fangraphs writes that Danny Duffy has been both lucky and unlucky.

Still, his ability to get free outs via a representative K rate and superior popup rate makes him a force to contend with in the intermediate term. The fact that he pitches his home games in arguably the most suitable park for his skill set, in front of an exceptional group of defenders, particularly in the outfield, raises his upside that much higher. Forget that won-lost record – Danny Duffy is way better than that, and his inflated FIP. He’s not as good as his ERA, but he’s plenty good enough.

The Washington Post likes the Royals chances to win the division over the Tigers.

So about that help coming down the pipeline from the minor leagues....

In the wake of the Ray Rice domestic abuse incident, here is a terrific piece by SB Nation writer Sarah Kogod on what its like to be in an abusive relationship and why women stay.

The new iPhone was unveiled yesterday. Slate thinks Steve Jobs would have hated it because its too big. Here is everything you need to know about iPhone 6. Apple also unveiled the Apple Watch, which apparently does not look like this.

Let's predict the first show in 2014 to get cancelled.

Vox.com explains Scottish independence. It has nothing to do with haggis.

Finally, thanks to all that came out to the Royals Review Watch Party. Other than Ned's managing and the fact Lee Judge didn't show up, it was a huge success. 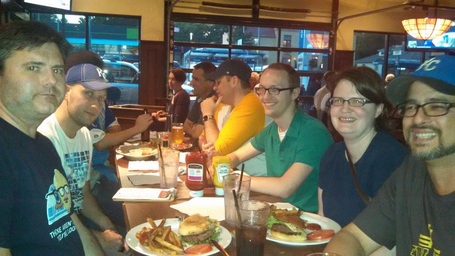 Your song of the day is "Just" by Radiohead.