The newly drafted lefty sees the big stage in the Big Apple.

Share All sharing options for: Breaking Down Brandon Finnegan's Debut

On Saturday, newly minted Royal Brandon Finnegan made his professional debut. It's quite a thing to make your big league debut in the Big Apple. Finnegan pitched 2 innings allowing 0 hits, 0 walks, while striking out two. In fun trivia his debut also made him the first MLB player ever named Finnegan. He's a historically important baseball player now. Congrats Brandon.

Finnegan threw 26 pitches in total. 10 in the sixth inning and 16 in the seventh. Interestingly both of those strikeouts came in the inning he threw the least amount of pitches and in the seventh he threw a little more than 1 1/2 more pitches than the sixth. 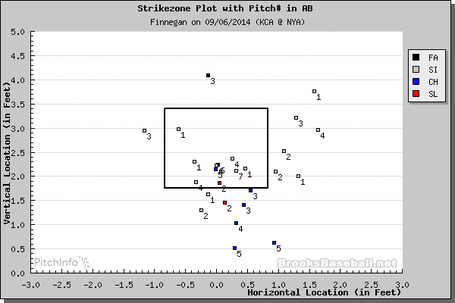 You'll notice that every at bat started with a fastball/sinker. Raw Pitch F/X data classifies the pitch as a fourseam fastball while BrooksBaseball (who I think tweaks the data) says it was a sinker. This somewhat gels with the scouting reports of Finnegan's fastball offering, but it was noticed to have more tailing action than sink (if my memory recalls correctly). I'm not a Pitch F/X expert so maybe there is something to this.

Finnegan was working primarily arm side (inside to left handed batters/away from right handed) and he relied heavily on the fastball/sinker (sinker will hereby be referred to as fastball in this article). While working the changeup he threw it down in the zone. Interestingly his slider is thought to be his best secondary offering, but he only used it twice on the evening. 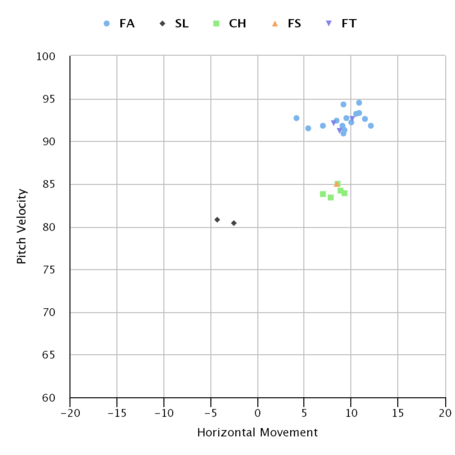 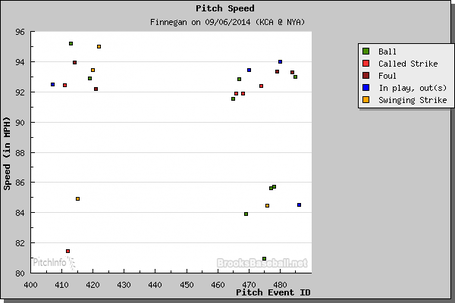 Here's the sequencing for Finnegan's second batter faced, Jacoby Ellsbury, where he recorded his first strikeout.

After sitting on a first pitch fastball, right after the previous batter JR Murphy swung away at the first pitch he saw (also a fastball), Finnegan snuck a slider in a hittable zone that broke back over the plate for Ellsbury. 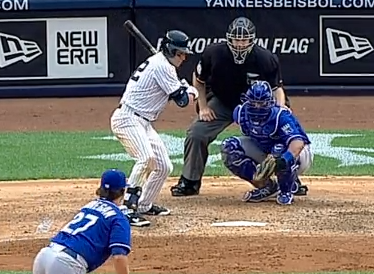 Maybe that sits a little low when you just eyeball it there, but Pitch F/X says it was an easy strike.

Finnegan then went away with his fastest pitch of the day to get Ellsbury to chase but he wasn't buying. Finnegan then would pump in a hittable fastball at 93  that was really over the heart of the plate. Ellsbury was able to just get a piece of it late and foul tip it.

After throwing three fastballs to Ellsbury he pulled the string on him with a changeup that was timed decently by Jacoby but swung on top of it. 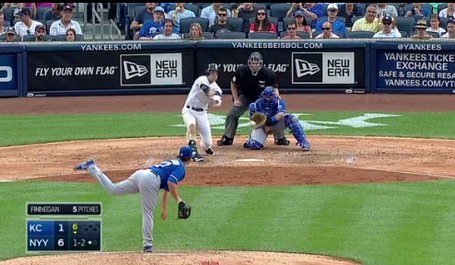 Next up was against soon to be retired Derek Jeter.

You could perhaps make an argument that Finnegan didn't throw Jeter a ball that would actually be a strike during the entire at-bat. Maybe he was scared of Jeter or maybe he knew Jeter was swinging at a career high percent of pitches outside the zone. Either way, Jeter chased three of them and almost chased all four. 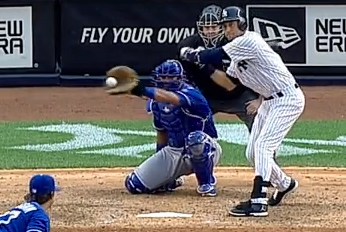 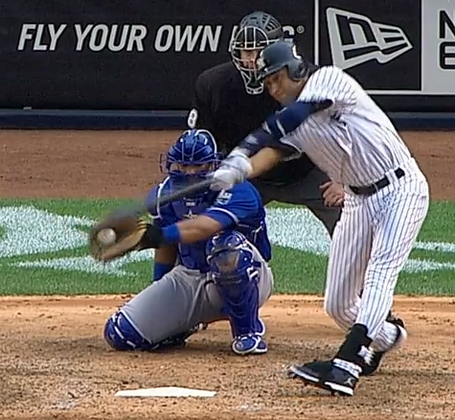 Off balance trying to catch up to the outside pitch. 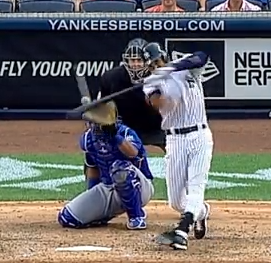 Jeter is both late and underneath the pitch. 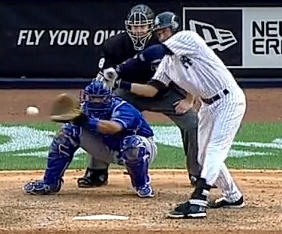 Then despite seeing basically the same pitch four times in a row, and being late on all four, Jeter swings at a pitch he probably isn't going to ever get the bat on for the strikeout.

Finnegan carried right around an 8-10 MPH difference between his fastball and changeup and scouts generally like seeing that sort of velocity separation between the two pitches. Finnegan also does a good job of throwing both pitches from the same arm slot and the deception he brings from his natural mechanics helps his changeup play up slightly even though it's just an average offering.

This is the smallest of sample sizes basically so little information can be drawn going forward for the most part. Finnegan isn't going to not allow a hit for the rest of the season probably and he'll likely walk somebody at some point.

One thing to look at going forward though is the reliance on the fastball for the first pitch of each at bat. Maybe the Yankees didn't have a ton of information on Finnegan and wanted to see him out for the first pitch, but it'll be tough to survive if hitters know he's going to try to throw a fastball for each first pitch. Also you'd like him to throw his slider more to same handed batters like he did against Mark Teixeira.