Red Sox Series Preview: Who are these guys?

Share All sharing options for: Red Sox Series Preview: Who are these guys?

The Red Sox have enjoyed the best eleven-season stretch in franchise history since World War I with seven playoff appearances, and three World titles. But 2014 has been unkind to the Boston nine, and it looks like they will lose 90+ games for the second time in three years.

Injuries and disappointing performances by younger players have led to a rough season in Beantown. The Red Sox were 27-29 as of June 1, but went 22-31 over the next two months, forcing their hand to sell at the trade deadline when they made the shocking deal to send Jon Lester and Jonny Gomes to Oakland for Yoenis Cespedes. They now stand 63-83, dead last in the Eastern Division, and the fifth worst record in all of baseball.

The Red Sox have struggled to score runs all year, and are dead last in the league in runs scored with 3.84 runs per game. They are second-to-last in batting average and slugging percentage, but eighth in on-base percentage thanks to third most walks. All-Star second baseman Dustin Pedroia dn outfielder Shane Victorino are both out for the year, leaving the Red Sox to rely on a host of young players including exciting young prospects Mookie Betts and Xander Boegarts. 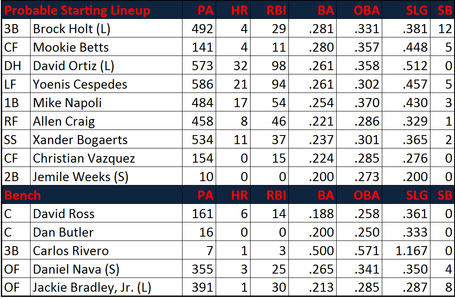 Bogaerts has been a disappointment this year after an exciting performance in last year's post-season. Even more disappointing has been the hitting of outfielder Jackie Bradley Jr. One of the best defenders in the game, Bradley has been a black hole at the plate with rumors of his "stubbornness" holding him back, leading to speculation he could be shipped out this winter.

The Red Sox are going with a six-man rotation down the stretch to get a look at some of their young arms. The Royals struggled against young rightie Rubby de la Rosa back on July 19 when he sprinkled five hits and one run over seven innings in a 2-1 Red Sox win. Overall, Boston has allowed the fifth-most runs in the league with 4.42 runs allowed per game. They are seventh in strikeouts, eleventh in walks allowed, and thirteenth in home runs allowed.

The Boston bullpen has pitched well, with a 3.31 ERA and the fourth-best strikeout-to-walk ratio out of all bullpens at 2.86. Only Oakland's bullpen has walked fewer hitters. Former closer Koji Uehara is the leading control artist, with just eight walks in 61 1/3 innings pitched this year, but has recently been demoted to low leverage situations after blowing three of his last four save opportunities. Edward Mujica and his 4.25 ERA take over closing duties with Junichi Tazawa and Burke Badenhop pitching well in late inning situations. Situational lefty Craig Breslow has struggled mightily this year with an ERA over five and a line of .280/.374/.430 against lefties.