White Sox Preview: We're still in the playoffs, but for how long?

The ship is sinking.

Share All sharing options for: White Sox Preview: We're still in the playoffs, but for how long?

Yesterday was a must win game. This weekend against Detroit are three huge must-win games. But let's not overlook the fact we have seven games left against fourth place Chicago, and all seven of those are must-win games as well. Every game is a must-win game, and the Royals must beat inferior opponents to keep up with their pennant-chasing fellow contenders.

The Chicago White Sox are in a position that should pretty familiar to Royals fans - far back of the pennant race, playing out the string with September call-ups. The club has traded away veterans like Adam Dunn, Alejandro de Aza, and Gordon Beckham, and long-time Royals-killer Paul Konerko is in his swan-song as he wraps up a fantastic career. Still, the White Sox have to consider this rebuilding year a success, as they have found the runaway Rookie of the Year winner in Jose Abreu, and have some other interesting young players like Adam Eaton, Connor Gillaspie, and Avisail Garcia to build around. 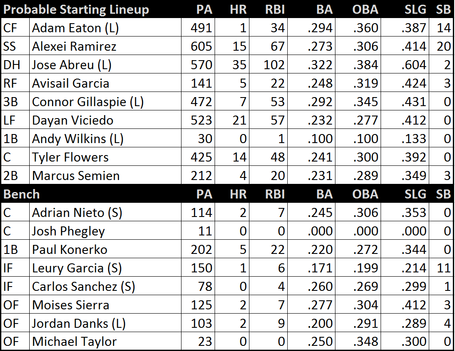 The White Sox pitching has been much worse, which was expected. They have Chris Sale and Jose Quintana, but decided to fill out the rest of the staff by picking up a bunch of cheap talent, throwing it against the wall, and seeing what stuck. The White Sox have allowed the third-most runs in the league with 4.72 runs allowed per game. They have issued the most walks, and have struck out the fourth-fewest hitters.

Chris Sale, however, is outstanding at throwing baseballs. He is probably going to win the Cy Young Award, and is really having a season for the ages. Sale has a 2.36 ERA in 99 2/3 innings against the Royals in his career, but only a 7-7 record in 12 starts (23 games overall). Sale has already defeated the Royals twice this year, allowing just one run over 15 innings of work, and is coming off a two-hit, no-run performance over eight innings his last time out against Oakland.

Rookie Jake Petricka has settled into the closer's role with 13 saves in 16 opportunities and a 2.61 ERA despite a less-than-impressive 6.9 strikeouts per nine innings. Overall, the White Sox have the second-worst ERA for relievers in the league at 4.32, with the second worst strikeouts-per-9-innings ratio, and the worst strikeout-to-walk ratio among American League relievers. Right-handers Javy Guerra and Zach Putnam have been the best out of the pen, but the team has found very little reliever depth beyond that.