The Second Half Nori Aoki

What has Nori done differently in the second half?

Share All sharing options for: The Second Half Nori Aoki

Last night, Nori Aoki set the club record for hits in a three game series with 11. Aoki is a historically good Royal now. That's something. It's a little deceiving, but it's something.

If it seems like Aoki has been better lately, he has been. Over the past 14 days Aoki has hit .435/.509/.500, good for a 194 wRC+ and almost a full win. That's a great little two week stretch, but Aoki hasn't done well just recently, but he's put up good numbers for several months now quietly.

A month or so back there were certainly some gripes about Aoki, most noticeably on Royals twitter, about how Aoki wasn't performing as they were expecting or how the Royals lost the trade. Now certainly a good second half doesn't mean you can have a bad first half and the whole season matters, but Aoki has been good for basically the entire second half.

So for the past few months Aoki has been basically a 30ish percent above league average hitter.

One noticeable spike you can see is a 50 basis point swing in BABIP. Swings like that are sure fire way to jump start your stat line and especially one that lasts for a few months. Aoki is walking slightly more which may be whats lead to him striking out slightly less. Maybe we can dig a little further on this one to see if it's not just BABIP driven or what could be driving the BABIP spike.

There are some minor variations there, but to my eyes and brain it doesn't look like he's doing anything in the second half that would lead to a better performance. If anything some things might show that he could be doing worse in the second half. He's swinging at more outside pitches, swinging at less strikes, making less outside contact, and making less contact overall. One big difference here is that Aoki is receiving considerably less first pitch strikes which may lead to the decrease in his Z-Swing%.

Thanks to the wonders of the internet, and specifically Darren at Baseball Savant, we can view how Aoki is being pitched to visually.

On the left is the first half and the right his second half:

Both the heat map and spray chart show that Aoki has been getting a better spread of pitches on the away side of the plate. Certainly seeing more pitches in the zone, especially over the plate and away, could see an increase in batting results.

Also thanks to Bill Petti and our own Jeff Zimmerman, they've created a great interactive spray chart tool which we can manipulate for Aoki's first and second half. Each event is a time that Aoki put a ball in play with a red shading representing a negative run value outcome and blue representing a positive run value, and as with most spray/heat data, the darker the color the extreme result was (weird phrasing). 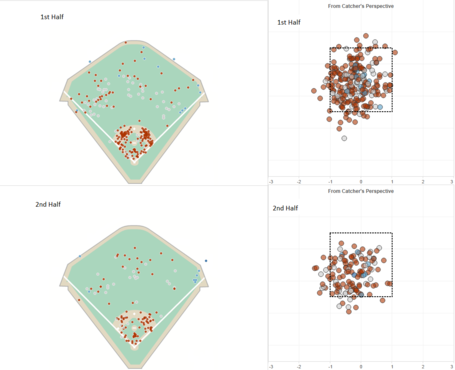 Maybe the data on the right jives with our above images as well as there is a noticeable consolidation to the lower-left quadrant of the zone. As well as it seems that Aoki has been hitting more balls out of the infield and not as many to opposite field. Thanks to the internet this is again something that we can view!

This is a lot of data and with data comes noise. Furthermore this is just one season of data and then it's split again so sample size caveats certainly apply. Maybe there is no real reason why Aoki has had a better second half other than random BABIP luck. I never promised anything, but at least we got a good look at what Aoki has done from the first half to the second.

Aoki is a fun player when he's producing. Even when he's not producing, he's still a quirky and a quiet guy with a translator. It's been a nice second half ride with Nori and he's finally hit his full season line to 101 wRC+ which makes 7 hitters hitting over 100 wRC+ for the second half (min 50 PA).