Tigers Series Preview: First place is on the line

I think this qualifies as a big series.

Share All sharing options for: Tigers Series Preview: First place is on the line

Here is what is at stake.

Aside from a brief series back in June in Detroit in which the Royals took three of four and took over first place for the first time, the Royals have had their butts handed to them by the Tigers. Detroit has won eleven of sixteen match-ups against Kansas City, outscoring the Royals 85-58. The Royals have dropped six of seven to the Tigers at home this year, with the Tigers scoring 8+ runs in four of those contests. In short, Detroit has dominated Kansas City this year. And that can all change this weekend.

The Tigers come into this series playing pretty good baseball, having won ten of their last sixteen, although they dropped their last two games in Minnesota this week. The Tigers are a club built on offense, and they are second in the league in runs scored, with 4.72 runs per game. They lead the league in on-base percentage, slugging percentage, and doubles. They are fourth in home runs. Three Tigers sluggers - Victor Martinez, Miguel Cabrera, and J.D. Martinez - have more home runs than any Royals hitter. The Tigers are not plodders on the basepaths, they have the fourth most stolen bases with most of the damage done by Rajai Davis and Ian Kinsler. 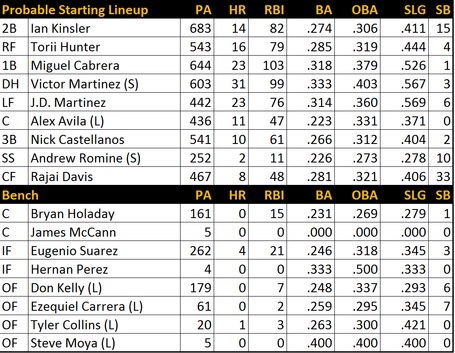 Former All-Star catcher Alex Avila has been suffering the after-effects of a concussion sustained a few weeks ago and has missed the last few games and may be unavailable this weekend. Victor Martinez is having an amazing career season with a chance to win a batting title and become the first 30 home run hitter to have 50 strikeouts or less since Albert Pujols in 2006. Two-time MVP Miguel Cabrera is having a "down year" but has heated up when it matters, hitting .469/.507/.844 with six home runs in 16 games in the month of September.

The Tigers tinkered with their rotation to avoid having rookie Kyle Lobstein pitch in this series, opting to have Rick Porcello start on Sunday. Justin Verlander will face the Royals for the sixth time this year, having given up 20 earned runs in 32 1/3 innings against them (5.57 ERA). Max Scherzer has struggled recently with a 4.46 ERA over his last six starts, although the Tigers won in five of those games.

The Tigers weakness has easily been their bullpen. Tiger relievers have a 4.28 ERA, third-worst in the American League. Thirty-nine year old closer Joe Nathan has showed his age this year, much to the ire of Tigers fans, with a 5.10 ERA and six blown saves this year, including Tuesday's game against Minnesota. Former Royals All-Star Joakim Soria may get save opportunities, although he has struggled with a seven runs and thirteen hits allowed in 7 1/3 innings of work this year. Starting pitcher Anibal Sanchez has also been moved to the pen to help him return to action after missing time with a pectoral strain. Righties Joba Chamberlain and Al Alburquerque have been solid in the middle innings, as have lefty specialists Phil Coke and Blaine Hardy, but the Tigers pen lacks depth beyond that.

This is the biggest series for the Royals in the history of whatever. The Royals are expecting three sell out games this weekend. All three games will be nationally televised. It doesn't get much bigger than this guys.