Rangers Series Preview: Get right against a bad team

The formula at this point seems to be, beat up on the bad teams, tread water against the good teams.

Share All sharing options for: Rangers Series Preview: Get right against a bad team

Good heavens, who forgot the series preview yesterday? I imagine most of you watched in befuddlement last night as the Royals played some team - the Strangers? Dangers? Rest assured, you will all receive full Royals Review refund for a lack of a series preview!

Your tardy series preview basically sums up what you learned from the first game - the Texas Rangers are a shell of their former self, populated right now by has-beens and never-weres. The nightmare season has seen them lose several key players to injury including Prince Fielder, Yu Darvish, Mitch Moreland, Shin-Soo Choo, Martin Perez, Matt Harrison, Tanner Scheppers, and Alexi Ogando. The have lost 49 of their last 67 ballgames including two out of three to the Royals two weekends ago.

The Rangers are eleventh in runs scored, ninth in on-base percentage, and thirteenth in slugging percentage, but the current lineup does not reflect their season totals for the year. Adrian Beltre is still healthy and having a fantastic season. His 5.8 rWAR this year makes up 57% of the team's 10.1 rWAR among positions players. Cuban free agent Leonys Martin has had a fine season as well, with 3.5 fWAR in his second full season. Despite expanded rosters, the Rangers are playing with a thin bench. Everyone is injured! 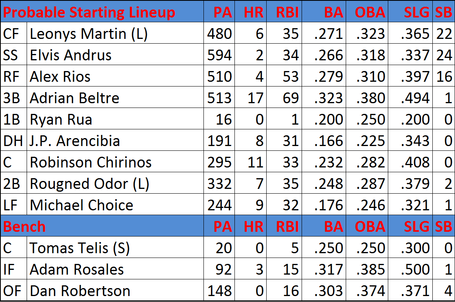 The Rangers pitching staff is in shambles, and they are last or near-last in every single pitching category, including being dead-last in runs allowed. They get back Derek Holland, a former 16-game winner who has missed the entire season with a knee injury. Kansas City-native Nick Tepesch will be called up before Wednesday's game to make his first ever start at Kauffman Stadium.

Neftali Feliz has returned from Tommy John surgery to assume closing duties, and is 7-for-8 in save opportunities with a 2.78 ERA in 22 2/3 innings, but just 14 strikeouts. Shawn Tolleson, picked up off waivers from the Dodgers, has put together a fine season with a 2.77 ERA and nearly a strikeout per innings. The rest of the Rangers pen is a hodge-podge of guys no one has heard of and will probably not see much in the big leagues after this season.

Beating up on the bad teams and treading water against the good ones seems to be the formula for the Royals down the stretch. They have a fairly easy schedule down the stretch, but you still have to play the games. Winning last night was a good start, let's keep the magic alive tonight.