Royals Review Roundtable: The last week of the season

How do the Kevins see the season ending up?

Share All sharing options for: Royals Review Roundtable: The last week of the season

With a season remaining in the most exciting regular season in nearly three decades of Royals baseball, we decided to have a quick Royals Review roundtable from the basement of Max Rieper's parents' house. Between pop-tarts, the gang was able to offer these nuggets of wisdom.

The Royals are 1.5 games back with a week to play. Do they still have a shot at the Central Division title or have you written it off?

Max Rieper: It wouldn't be totally crazy to see Detroit stumble the last week against the White Sox and Twins. They have just a 15-16 record against those teams combined this year, and their pen still has major issues. Still, a Central Division Title in Kansas City would require the Royals going on a really hot streak, and the Tigers getting quite cold. I haven't completely written it off, but my focus is on the Wild Card now.

Minda Haas: I've written it off. Sure, it's technically still possible, but the Royals are showing off their flaws these days and they've got too much to correct in too little time to get back on top and stay there.

Kevin Ruprecht: I do not believe the Royals have a chance anymore at the division. They really needed a sweep against the Tigers, and instead they couldn't manage themselves out of a wet paper bag.

Josh Duggan: I've written it off. I'm not even sure they'll grab the wild card.

Matthew LaMar: They're mathematically alive, and it's within the realistic realm of possibility.  It's not likely, but Detroit is a flawed team, and they could crumble.  I'd give the Royals a totally unscientific odds of 33%.

Josh Ward: I have written it off. With seven actual games left, even if they went 5-2, the Tigers would need to go only 4-3 to hold onto their lead. Detroit is playing much better than a team that would go 4-3 against the likes of the White Sox and the Twins (even though the Twins won 2 of 3 recently).

Shaun Newkirk: At one and a half back yes, but with the impending Cleveland loss it's further and probably unachievable.

Tyler Drenon: It doesn't seem likely with another loss from the suspended Cleveland game looming, but anything can happen, I guess.

Of course, according to quantum superposition, they absolutely will win the division. It just might not be the result we are able to observe in "reality." (I've been trying to convince myself that this collapse isn't happening by tying my brain into a soggy knot.)

Who, in order, do you blame most for Saturday's loss?

Minda Haas: Salvador Perez - because not tagging was boneheaded and he knows better. Ned Yost - for his use of Raul Ibanez AND trying to defend the move so pitifully. Real professional at-bat that was, guy. I also didn't love him letting Nori Aoki bat in the 9th, even though it happened to work. Why keep a guy in that spot who is 99% likely to hit a ground ball?

Max Rieper: Salvador Perez is most to blame. Its an understandable gaffe, but it cost the Royals at least one run for sure, and possibly another with Hosmer at third base if Perez doesn't mess up. Ned Yost certainly mismanaged the game, but the most likely outcome in the ninth inning was an out, no matter who Ned sent up. Raul Ibanez was almost certainly the worst option. I mean, even Terrence Gore had the possibility of a bunt single, right? Finally, that Waldo dude. Seriously, stop. 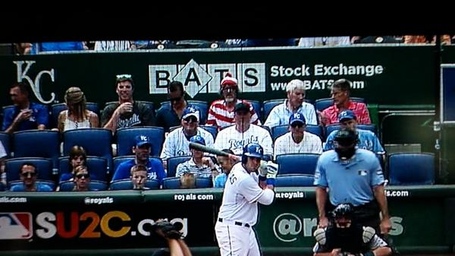 Josh Ward: Dayton Moore, for making the personnel decisions regarding who his coaches are. Ned Yost, for pinch-hitting Raul Ibanez for anyone. Ever. Salvador Perez, for forgetting to tag up, and also for being generally a not-good player the second half of the season.

Josh Duggan: I listened to the most of the game on the radio whilst plying my boat captain trade, so I cannot speak with absolute certainty. Salvador Perez's boner was inexcusable, and that run should have resulted in a knotted game after nine innings. Clearly, that was the crucial play in the game, and the Royals didn't go to extras against the Tigers' pen because Perez didn't tag up.

Yost deciding to take the bat out of Nori Aoki's hands early to sac bunt in the third (and possibly first) inning was really dumb, but electing to pinch-hit Raul Ibanez for The Ham with the season on the line when Billy Butler and Lorenzo Cain sat on the bench and all three of the options in this scenario not named Raul Ibanez were far and away better options was completely and utterly indefensible. So Dayton Moore.

Shaun Newkirk: Ned Yost. Salvador Perez. No reason for Ibanez to bat while Billy Butler eats a pulled pork sandwich in the dugout.

Tyler Drenon: Max Scherzer, Ned Yost, Salvador Perez.How confident are you that the Royals can hold onto a playoff spot with a week to go?

Matthew LaMar: Pretty confident, if you consider 'Wild Card play-in game' as playoffs.  The math is with them. They've got some games left against the White Sox, and they're pretty good against them.  Besides, their competitors aren't exactly the paragon of baseball brilliance.

Minda Haas: 53%, but my nerves are shot and I've got heartburn that won't go away until we know one way or the other.

Josh Duggan: Not even remotely confident.

Kevin Ruprecht: I'm somewhere between 0-50%. Oakland is still in free-fall mode, and Seattle is just as flawed as the Royals are, but I think the domes have been cracked. If the Royals hang on to the 2nd Wild Card, I think it will be more due to Oakland/Seattle crapping the bed rather than anything special the Royals did.

Max Rieper: I feel better now that we have a 1.5 game lead on Seattle, and the Mariners have to play the Blue Jays this week. I still fear the Angels will roll over for the Mariners this weekend, but even then, the Mariners may have problem scoring runs. I think the Royals have played well against teams not from Detroit this year, and that should continue this week with no Corey Kluber or Chris Sale on the agenda.

Shaun Newkirk: Fangraphs has us at 84% playoff chances and I think it's a touch lower. Seattle has been unimpressive this weekend and I don't like going to Cleveland. It'll be nice playing the White Sox for the last four games and no Chris Sale.

Josh Ward: I'm not. What is there to be confident about? This organization has shown a stunning lack of awareness, in terms of personnel decisions, roster construction, in-game management, preparation, and analysis. Despite Kansas City's luck against them this season, Oakland is a better team. Seattle is slightly worse, but with only seven games, anything can happen.

Tyler Drenon: The years of losing have conditioned me to believe that they will always fail. Logically, I know they have a pretty decent chance of getting to the play-in/off game against Oakland or Seattle, but it still seems like there might be something metaphysical happening. It won't be completely satisfying for them to secure a "playoff spot" since that doesn't guarantee them a proper series. It would definitely be an accomplishment worth praising, but it wouldn't be the same as actually playing in the ALDS.

The lineups seem to change daily now. What do you think should be the regular lineup the rest of the week?

Minda Haas: I'm not hugely obsessed with specific batting order, but I would give Infante's busted shoulder a game or two off, leave Ibanez out of things, and use Willingham wherever possible.

Tyler Drenon: Not sure it matters that much, but:

Max Rieper: I mean, it'll never be this, but:

It even has L-R-L-R, which Ned Yost loves. This lineup will never happen.

Matthew LaMar: *shrugs* I think lineups aren't nearly as important as people say there are.  The Royals have been poor hitting across the board for a while now, so unless Gordon is batting eighth, I just don't think it matters.

Max Rieper: There's a bit of magic left. I predict the offense perks up a bit the last week and they end up with 89 wins. Oakland continues their mad descent and Texas continues to show signs of life. The Royals record at the end of the week is 89-73. On Monday they are preparing for their first home playoff game in 29 years with the A's coming to town. Jon Lester is mysteriously detained at KCI.

Kevin Ruprecht: The Royals' record at the end of the week is, assuming you mean the full season record, is 88-74.

Josh Ward: The Royals record at the end of the week is 88-74. On Monday they are scrambling to make a flight to Seattle to play a tiebreaker for the right to play in the play-in game against Oakland.

Josh Duggan: The Royals record at the end of the week is 87-75. On Monday they are sitting at home, having missed the play-in by one game.

Minda Haas: The Royals record at the end of the week is 88-74, on their way to try to win the "technically it IS the playoffs" game, only to lose it because Ned Yost does something infuriating.

Tyler Drenon: The Royals record at the end of the week is 92-70. On Monday they are the fulfillment of my preseason prediction (92 wins).

Shaun Newkirk: The Royals record at the end of the week is 88-74. On Monday they are listening to the new U2 album. Okay. I'll commit. They are making travel plans to fly to Oakland.