No more Tigers around to intimidate us. Its time to see if the Royals can go the distance.

We are so focused on the Tigers, Athletics and Mariners that we forget the Indians are still technically in this thing, fighting for their playoff lives. A Royals sweep (including the suspended game) would eliminate the Indians. An Indians sweep actually puts them ahead of the Royals. So this is arguably just as important a series as the one the Royals just played.

The Indians are currently 81-74, 3.5 games back of the Royals for the final Wild Card spot. They've won five of their last six, although it came against the Twins and Astros. The Indians had a red-hot August, going 18-9 after trading starting pitcher Justin Masterson and shortstop Asdrubal Cabrera at the July trade deadline. Since then, they've gone just 11-10 in September. They've handled the Royals well this year, winning 9 of 16 contests, including 5 of 7 at Progressive Field.

The Indians were projected to have a pretty good offense, but had disappointing seasons from Nick Swisher (who is out for the year), Michael Bourn, and Jason Kipnis. On the flip side, Michael Brantley is having a fantastic season and should finish in the top ten in MVP balloting, while Carlos Santana has turned his season around with at terrific second half, and Yan Gomes has emerged as one of the best-hitting catchers in the league. Overall, the Indians rank middle-of-the-pack in most offensive categories, including runs scored, which they rank seventh at 4.19 runs per game. 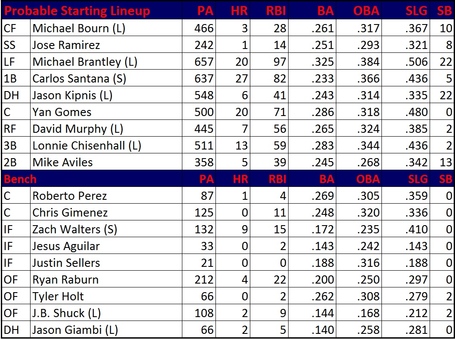 Zach Walters is the young infielder obtained from Washington in the Asdrubal Cabrera deal at the deadline, and would rank tied for fourth on the Royals in home runs despite just 132 plate appearances. Carlos Santana has hit .276/.392/.519 with 13 home runs over his last 58 games and is a lifetime .331/.437/.610 hitter against the Royals.

The Royals and Indians will officially start the series by ending the game that was suspended in the tenth inning in Kansas city on August 31. The Royals trailed 4-2 in the bottom of the tenth with reliever Kyle Crockett set to face Mike Moustakas, Erik Kratz, and Alcides Escobar. Crockett must face at least one hitter. Anyone on the roster is eligible to use in the game, except for players who were substituted on the 31st. Once that game is resolved, the two teams can begin their regularly scheduled series. The Royals will luckily avoid Indians starter Corey Kluber, one of the best pitchers in the league. They still have to face three quality pitchers who can strike hitters out. No team has struck out more hitters in the American League this year than Cleveland.

The Indians bullpen has the fourth best ERA among American League relievers at 3.16. Cody Allen has settled in as closer with 22 saves and a 2.13 ERA with 11.8 strikeouts per nine innings. Bryan Shawn and Scott Atchison have performed well from the right side, while the Indians have a trio of effective lefty-relievers in Marc Rzepczynski, Kyle Crockett, and Nick Hagadone.