Royals vs the Changeup

The offspeed pitch that gives the Royals hitters woes

Share All sharing options for: Royals vs the Changeup

Last night while watching Lorenzo Cain record his 104th strikeout on the year via a Carlos Carrasco slider, I went diving into his pitch F/X data since it seems like breaking ball pitches (sliders in particular) kill him. It's true; they do.

Lorenzo Cain has seen 303 sliders this year (his second highest pitch type outside of fastballs) and has hit .202 against them. Over his career he's seen 941 sliders and hit .231 off them. Lorenzo Cain vs sliders is not only a weird court case title, but also isn't the point of my article. While digging through his pitch F/X data I came across this:

In his career, Lorenzo Cain has seen 660 offspeed pitches and hit exactly one home run off of them. Cain isn't a known slugger, but his home runs by pitch type goes:

That's a pretty uneven spread. That one offspeed home run came off a splitter that was served up by Jose Valverde (RIP) in 2013 in the bottom of the ninth to tie the ball game. A GIF can be found below (h/t to our "brother site" Bless You Boys):

My final Lorenzo Cain stat is that he's never hit a home run off a changeup. In 548 changeups, one has never left the park. The furthest he has ever hit a changeup was May 19th of 2013 which he hit 346.25 feet in which Cory Blaser was the head umpire. Man I love pitch F/X.

A pitcher with a good changeup can be a deadly weapon. Using it in the same arm slot as a fastball with roughly 7 or so MPH difference between the two, it looks like a fastball out of hand then of course drops as it tumbles towards the plate. It the most effective pitch (a little better than a curveball) against opposite handed batters (reverse platoon).

Basically a who's who of the leagues best pitchers sprinkled with other really good pitchers. Here's how the league is hitting changeups using the same wCH/C stat above:

Here's the Royals league rankings in that span:

So generally the Royals fell in the bottom 25ish in the league when it comes to pitch value on the changeup and over a 5-year span they are 25th worst.

Also because the internet is awesome we can break down the main 2014 core has done in their career vs changeups:

Now how about that same core with just this year:

A little more on Hosmer for his career vs changeups.

Of the career 58 home runs Hosmer has, 11 of them (19%) of them have been off changeups. Here's your spray chart of those home runs. 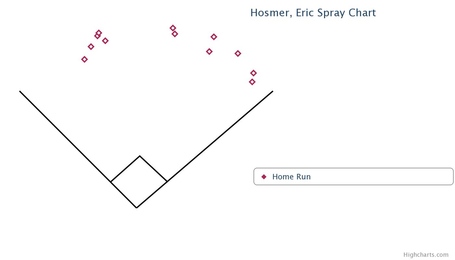 This year for Hosmer two of his home runs, all 8 of them, have been off changeups and he's hit that pitch well as reflected above and now below.

Like the terrible and inaccurate Clint Eastwood movie, Hosmer has trouble with the curve.

Easily Hosmer's worst pitch this year and over his career only the slider is worse. Here's his breakdown by pitch category for his career:

Hard stuff and offspeed pitches are no problem for Hosmer. He hits them for not only average, but also power. Offspeed pitches are generally are a weapon against opposite handed batters and but Hosmer has hit the reverse-platoon fairly well alongside the the traditional platoon.

Changeups vs Hosmer by same lefthanded pitcher per season:

As for the man struggling to hit changeups this season, we can take a further look at Salvador Perez's results.

So Perez is just struggling a bit this year as he's normally hit changeups well for his career.

Perez by pitch category for his career:

It's amazing he's getting thrown so many fastballs given his struggles with other stuff relative to the fastball.

About 1/3 of his fastballs seen have been first pitch fastballs.

This article kinda veered away from what the title suggested and that's on me, but the main point still stands: the Royals aren't very good at hitting a changeups and teams are aware of that it seems.

So teams are pounding the Royals with sliders and curveballs. How are the Royals doing against that?

As you'd expect given the team number, most of the team is doing poorly.