In depth against Trevor Bauer

The Royals face this young one tonight in another important game, since they're all important.

Share All sharing options for: In depth against Trevor Bauer

Trevor Bauer is an interesting pitcher. He was the subject of this long-form piece espousing the greatness of effective velocity. You'll hear from me about effective velocity during the offseason, but know that Trevor Bauer takes a unique approach to the game. He had a rough time in Arizona because they did not let him enact his effective velocity gameplan. Cleveland, supposedly, has been more open about Bauer's use of this concept, and Bauer's rewarded Cleveland with roughly average production as a starting pitcher.

Bauer's approach has clashed with the Royals twice this season, and two very different results occurred. His first tilt against the Royals was on June 11th. Bauer went 5.1 innings, gave up 3 runs, issued 1 walk, and struck out 1 guy. Three runs in a lower number of innings is fairly typical of Bauer, and a low number of walks and strikeouts is fairly typical of the Royals. The Royals ended up winning that game 4-1, and in a fun little quirk, all 4 runs were scored by means of the sacrifice fly.

The second game occurred on August 30th. Bauer again had a short outing, lasting only 5.2 innings but giving up no runs. Scoring no runs is typical of the Royals. However, Bauer struck out 6 guys and walked 5 guys. Those are unusual numbers for the Royals but not for Bauer. The Royals lost that game 3-2.

In general, Bauer is a high strikeout, high walk, fly ball pitcher who throws everything. Seriously. Here's Brooks Baseball's categorization of his repertoire in 2014: 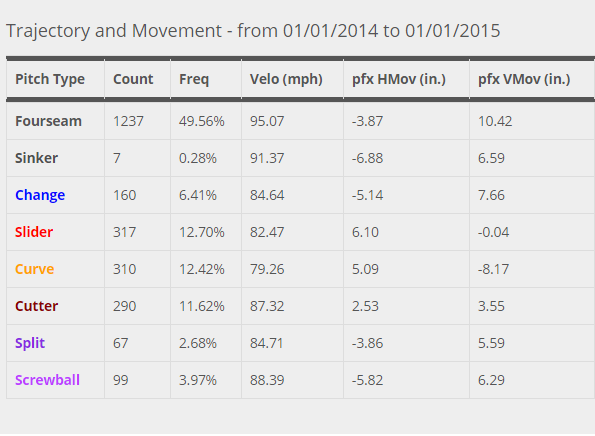 I guess he doesn't throw a palm ball like that reliever in Pittsburgh, but there are 8 pitches listed there. I imagine those sinkers were probably just hard changeups, though. Bauer can come at you with 95mph heat or a diving 79mph curveball. Though he relies on his fastball the most, that reliance has decreased throughout the season. 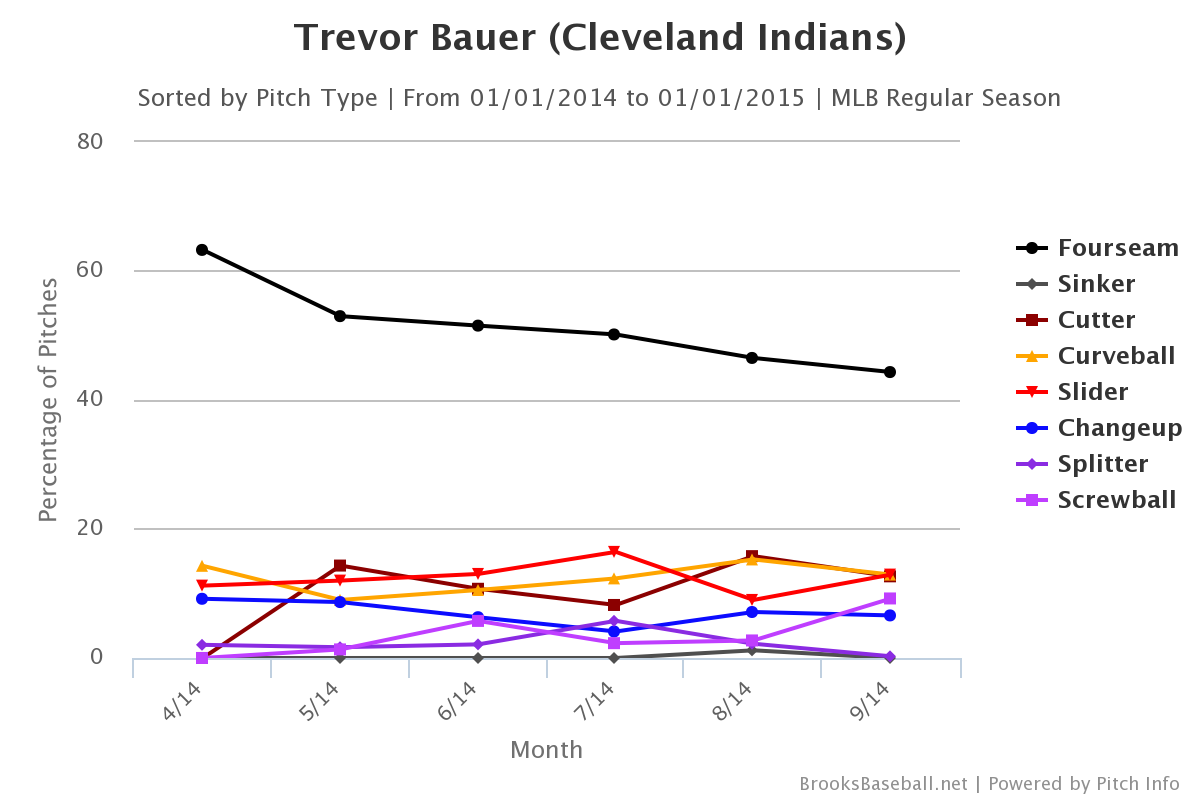 That conglomeration of colors at the bottom is pretty......

What? Oh. Trevor Bauer. Bauer is ridiculous at changing speeds, which is part of the effective velocity framework. Here's a plot of his pitch speeds in the August 30th game against KC. 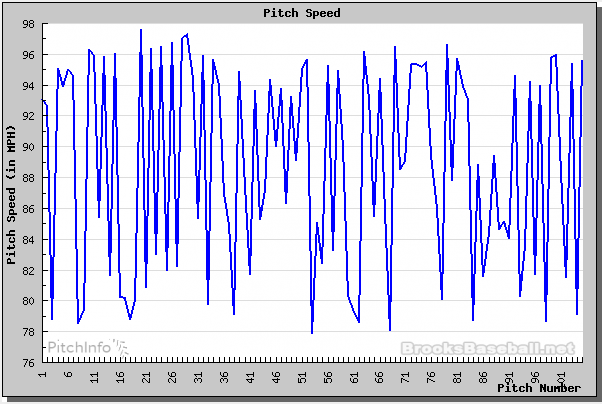 That's pretty intensely jagged. I suppose you could say that Bauer is predictable in that he'll usually throw the opposite speed of whatever pitch he just threw. You just probably don't know which breaking or offspeed offering he'll deal.

Bauer is a pitcher with a gameplan. He's going to execute it. If the Royals can take advantage of this, they might be able to determine which velocity is coming the next pitch. They might even be able to sit fastball in certain situations (hitter ahead in count having just seen an offspeed pitch). This should play to the Royals' strengths, which don't involve hitting offspeed pitches. If they can lay off anything that's not over 90mph, they should get pitches that they want. The Royals' offense has been roughly average against fly ball pitchers this season, and if they could just diagnose Bauer's gameplan quickly and take advantage of it, the offense just might show up.