Its time to ice this thing and break out the bubbly.

The White Sox did the Royals few favors by dropping two out of three to the rival Detroit Tigers, so they can do them a big favor by rolling over this weekend as the Royals probably need a four-game sweep to have any hope of taking the division title. The Royals can clinch at least a Wild Card spot with two wins in the series, no matter what Seattle does.

The White Sox would probably be talking about what a successful season it was to be around .500 had it not been for a disappointing 9-19 month of August. Still, the 72-86 record this year has to be secondary to the progress made by some of their younger players, and the emergency of star first baseman Jose Abreu who will certainly be American League Rookie of the Year. The Royals have handled the young White Sox well this year, taking 10 of 15 contests, including five of six games in Chicago.

Despite losing veterans Adam Dunn, Gordon Beckham, and Alejandro de Aza in mid-season trades, the White Sox are eighth in runs scored. They are a free swinging team, just twelfth in walks, with the second most strike-outs. But that philosophy has helped produce the fifth most home runs, although Abreu makes up 23% of their 150 home runs. 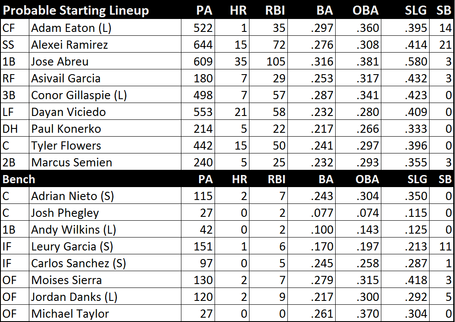 This will be the last Royals fans will see of long-time White Sox veteran Paul Konerko, and I think I speak for all Royals fans when I say - thank heavens. It is probably the best compliment we can give Konerko that we are glad to see him go, as it seems like he terrorized awful Royals pitchers for over a decade. Konerko will end his career with over 2,300 hits, 439 home runs, and a ring with the 2005 White Sox. He will end his career 12th all-time (or higher if he can smash two out this weekend) among first basemen in home runs and 17th all-time in hits. While he won't get the fanfare of a certain New York shortstop, and he likely won't end up in Cooperstown, if there was a "Hall of Very, Very Good", Paul Konerko would certainly be in it.

White Sox ace Chris Sale wasn't able to defeat the Tigers yesterday, but the good news is that was his last start of the year, and he won't be around to face Royals hitters this weekend. The Royals will still have their hands full tonight with Jose Quintana, one of the most underrated pitchers in baseball. Quintana has never pitched well against the Royals however, with a 4.20 ERA in 11 starts, and an 0-5 record.

The White Sox pen, as we saw against Detroit, has some issues. They are second-to-last among American League relievers in ERA at 4.38, and they have the worst strikeout-to-walk ratio of any league bullpen. Rookie closer Jake Petricka has been pretty solid with 14 saves in 16 opportunities and a 2.88 ERA, despite an underwhelming 1.72 strikeout-to-walk ratio. Rookie right-hander Zach Putnam has also been good with a 1.98 ERA, but the rest of the pen is a collection of scrap heap pitchers with the White Sox throwing them to the wall to see what sticks.

There should be a decent number of Royals fans attending this weekend's games, so feel free to use the comments as a way of meeting up for the celebration.