A breakdown of Jon Lester

The Royals' opposing pitcher has given them fits this year.

Share All sharing options for: A breakdown of Jon Lester

Tonight, the Royals face off against Jon Lester in the one game playoff series to determine who goes on to face the Angels. Lester is in the midst of arguably the best season of his career. With an FIP below 3, Lester is a legitimate ace who has done very well against the Royals this year. The Royals seem to have a hard time figuring out what to do against Lester. Here are the stat lines for each game against the Royals:

He has held the Royals to a meager .253/.301/.333 line this year. The Royals will have their work cut out for them in order to put some runs on the board.

Lester is mostly a four seam, cutter, and curve guy who sprinkles in some sinkers and changeups. However, his reliance on the cutter has increased to an all-time high this year at the expense of his changeup. 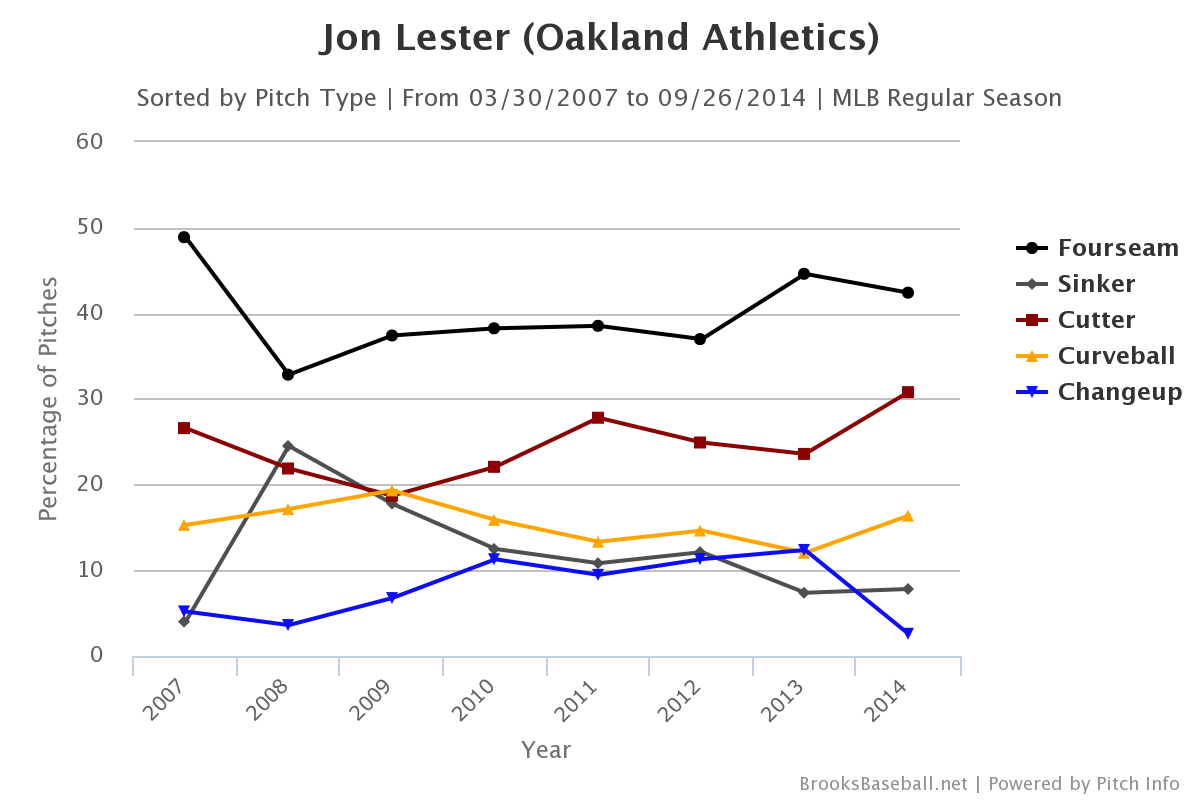 There are a few things the Royals' hitters could expect when they step in to face Lester. If behind in the count, Lester will abandon his curveball and stay mostly four seam/cutter. However, when Lester is ahead in the count, he stays relatively unpredictable by using his pitches near their overall averages, with the exception of a slight increase in cutter usage. Again, his cutter is the main weapon. Lester does tend to throw it to only one area, though. 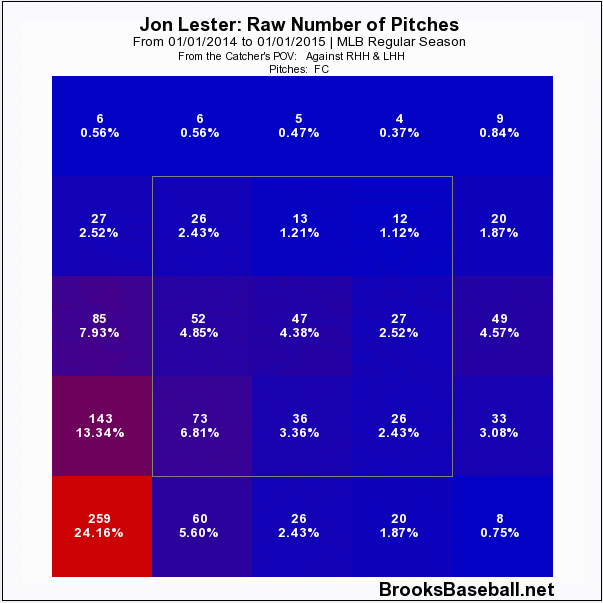 *Aaron Stilley posted a .gif of the same pitch at Royals Authority yesterday. I would like to note that the .gif below is one I created using Baseball Savant's media player functionality and LICEcap. I chose to use this pitch last week and created the .gif before Stilley's article. The pitch is so juicy that it has to be shown again.

It looks like we could really use Infante and Perez to break out of their prolonged slumps. Moustakas might be rendered ineffective, though a cutter doesn't have to be present for Moustakas to be ineffective. Dyson shouldn't be playing against Lester. It looks like most of the other guys are somewhere in the middle, which is what I would expect. Not all cutters are good ones.

There is the idea of sitting Moustakas for Christian Colon or Jayson Nix, but how effective can Colon be at the plate with a broken finger? Does the potential boon from Jayson Nix outweigh Moose's defensive contributions? I'm not so sure. Nix's career line is something awful, but he does have an 82 career wRC+ against LHP, which is better than Moose's 63 wRC+ against lefties. Ned has said Moustakas will play, so we can put this one to bed.

There is also the idea of sitting Hosmer and playing Butler and Willingham at 1B/DH. Both Willingham (129 wRC+) and Butler (142 wRC+) have hit lefties very well throughout their careers, but Hosmer is a "hot bat" where Butler is not. Yost will probably take this into account. Hosmer is about league average in the LHH vs. LHP department, but that doesn't mean "good" (84 career wRC+ vs. LHH). The organization values Hosmer's defense very highly, so I imagine we'll see Hosmer/Butler at 1B/DH. The Royals have deemed Moustakas' defense more valuable than the potential offensive improvement from Nix or Colon, so I imagine the Royals will follow a similar line of thinking at first base. I feel like the organization fears the backlash of a missed grounder over an 0-3 performance.

Despite the fact that Lester has walked well under a league average rate of batters this year, he has not dramatically increased his percentage of pitches within the zone. Lester has a below average zone% and an above average first strike rate. Lester's strategy will be to get ahead in the count and then live on the periphery of the zone. This strategy will work against the Royals' lack of plate discipline, and I'm sure there will be a lot of weak contact. If ever there was a time for the Royals' dormant plate discipline to manifest, this would be the time. On the other hand...

...To counter this, the Royals might consider being aggressive on the first pitch. This could actually be considered a weakness of Lester's. Over Lester's career, batters who have swung at the first pitch against him have had an OPS 10% worse than against the league overall and 16% worse in 2014. However, the Royals don't swing and miss too much. Against those who make contact with the first pitch, Lester has allowed an OPS 41% better than league average over his career and 26% better this year. This could result in lots of easy outs and could be taken advantage of if Lester adjusted to the strategy, but if the Royals could steal an extra hit or two, that could make a difference.

From Lester's side, unfortunately, the strengths of the Royals' pitching staff and home park are also Oakland's/Lester's strengths. Lester leans more fly ball this year than usual, and his presence in Oakland has made that more clear. With Oakland's pitcher-friendly home park and decent outfield defense (Reddick, Fuld, Moss, Gentry), Lester will feel comfortable at the K. Despite the cutter being his main weapon, the four seam fastball will probably be the most common pitch, and that one generates a lot of fly balls.

They often say that anything can happen in one game. In one game, the Royals could score 10 runs. However, Lester seems like the kind of pitcher that will limit the odds of that happening. I have a feeling the Royals will be small-balling in the early innings, looking to manufacture runs against a pitcher who has generally shut them down. I'm hoping that Lester's cutter just isn't working Tuesday.