James Shields and How to Beat the Oakland Hitters

Share All sharing options for: James Shields and How to Beat the Oakland Hitters

So this is it. We're in the playoffs. Breathe, relax, and enjoy it for what it is. Even if the Royals lose to Oakland tonight remember that this is the furthest the Royals have made it in the post-season since 1985. That's something to be sure. That's also a sad thing to think about.

Another sad thing to think about is the match-up. Oakland is a good baseball team and Jon Lester is a very good pitcher, something Kevin discussed on these digital pages yesterday.

Today we'll discuss who the Royals are sending out to thwart the team that once resided in Kansas City. Although one should note, no player on the current Athletic's squad played on any Kansas City A's team so we'll skip on writing that article.

As teased just a paragraph earlier, the Royals will be sending out a pitcher named James Shields. Shields was acquired by the Royals from the oft discussed and widely divided opinionated Wil Myers trade. Many a articles have been written about that so we'll leave that in the past and press onward towards the future here.

I know what you're thinking reader: "Hey author, tell me more about this James Shields pitcher!" I will oblige your request.

Shields has been a very good pitcher since joining the Royals in the 2013 offseason. Since being acquired by our home town team, Shields has been the 13th best pitching in baseball by fWAR 20th by ERA, and is 2nd in innings pitched over that span. While Shields doesn't quite fit the profile of what one would consider an "ace", he's a very good #2 and if you're going to trot any pitcher out to the rubber you could do considerably worse than Shields.

This has been a brief profile of Shields and if you're more curious about him then I implore you to read more on the seemingly infinite pages of the internet.

What's arguably as important as who the Royals send out to begin their quest in advancing to the ALDS is who they are sending Shields out against.

Also as teased earlier, Oakland is a good baseball team. How good? Let me throw data at you to help answer that question.

Oakland is the 6th best team by fWAR for their hitters (two spots ahead of our beloved Royals). Rather than do one aspect of baseball really well and other not so well, they instead do every thing just well.  As an non-pitcher unit they are:

It would normally seem that a team in the middle of the road in most categories would aggregate out to being a middle of the road team, but alas that logic is flawed. While Oakland isn't scorching the league in any one category, they are adequate in all of them which ends up being better than teams who are exceptionally well in one and poor in another (see the Royals with defense and offense, Tigers with offense and defense).

It should surprise anyone that Oakland leads the league in BB%. Not only is that the "Moneyball" approach but as my college frat friends would say, that is also "money." As you would expect out of a team that walks in 9% of their plate appearances (I almost said at bats...) they also don't strike out much relative to the rest of the league. They are 29th in K% in baseball (one spot higher than our Royals). In the power department they are 13th in home runs and 14th in ISO.

That's the formula really for a 2% better than league average offense. Don't strikeout  a lot, walk a lot, get on base, hit some home runs, and hit for power. All the makings of a good offense.

They are extremely particular when it comes to pitches and getting them to bite on outside of the zone pitches is a tall order. They also aren't swing happy in the zone or overall. When they do swing at pitches in the zone they make contact and any time when they swing the bat they can put the ball to it.

Those are your five main pitch types (Four/Two seam fastball, Slider, Curveball, Changeup). Oakland has a lineup made of predominately left handed and switch hitters.

This is perhaps why the A's see more changeups than all but 2 other MLB teams as the changeup is most lethal against opposite handed batters and a majority of MLB pitchers are right handed. Meanwhile, sliders and other breaking balls are more effective against same handed batters so that helps explain the low slider usage against them. When it comes to hitting the changeup the A's are 0.14 runs below average but that ranks them just 15th overall. Oakland hits right handed pitchers to the tune of a 104 wRC+ and .247/.324/.387

A little more advanced breakdown of particular Oakland hitters against a changeup this year:

Lot of different results there. Moss is dreadfull against the changeup and so are Callaspo and Norris. Donaldson have an extreme split where he mashes changeups against left handed hitters, but against right handed changeups he struggles. Crisp and Reddick have fared well.

Here's how right handed pitchers have been attacking Oakland hitters with changeups: 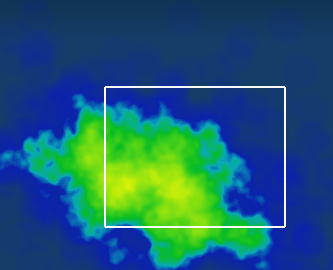 This is from the catchers perspective and Oakland features mainly left handed batters or switch hitters who would bat left against a right hander. Primarily they've been keeping it in the zone but down and away.

James Shields throws four or five pitches mainly: a four seam fastball (30%), cutter (25%), changeup (21%) curve (11%) and two seam fastball (12%) . He's known for his changeup and although he's had poor run value per 100 thrown this year on it, for the past several years he's generally had one of the 15-20 best changeups in baseball. This year he's dropped his changeup usage ~3% less against last year and ~6% against 2012 so maybe he's aware of it's slight ineffectiveness, but it's still easily his best pitch.

Shields repertoire gives him some options as he throws two or three reverse platoon pitches in his changeup, cutter and curveball (cutter is debatable for reverse platoon splits) and a large platoon pitch (two seam fastball) but he's weighted more towards opposite handed pitchers and nicely Oakland features a lot of them.

So in theory Shields should be attacking Moss, Callaspo, Donaldson, Norris, Sogard and Lowrie with changeups. That's a significant part of the A's lineup that seem to be susceptible to right handed changeups. 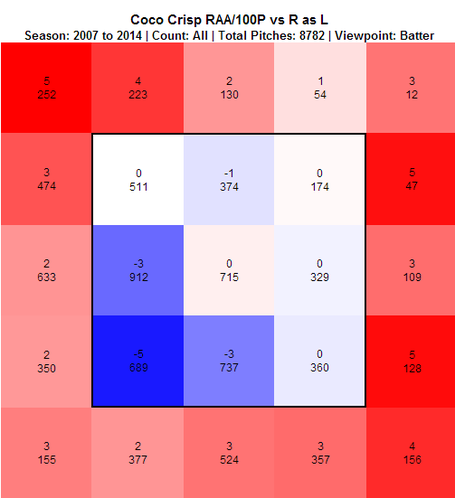 Down and away is a weak spot for Crisp.

Sam Fuld is a particular case here. Normally he doesn't hit changeups very well over his career (.128/.174) but this year they've been his pitch and especially against right handers (.308/.423). That's come with a .333 BABIP on them. Two of his worst pitches this year are against the fastball and curveball (both pitches Shields throws) and even in one and two ball counts he's not crushing the fastball (1 ball .216/.353 2 ball .143/.238) and over the past few years he's struggled against the fastball.

In reality, Fuld isn't a very good hitter and his resurgence this year has been defensively driven. I don't particularly think Shields needs to make his gameplan around Sam Fuld.

Josh Reddick hits a couple pitches well in his career.

He better in most cases against a right hander than his career line. Where Reddick struggles to make contact is the cutter. He has a career .202 average against both handiness and a .182 vs righties. What he does well though is when he makes contact against a cutter he crushes it. Career .213 ISO vs both hands and .258 vs righties. 73% of right handed cutters go for strikes against him.

So unless Shields picks up a splitter over the weekend, he's probably going to just have to go with the best pitch against Reddick which is the cutter or curveball.

If James Shields were going to wear one of those wristbands that quarterbacks wear for play calling then he could print something like this off and look at it before each batter to see where to attack and with what.

Now this is all in theory and there are sample size warnings to be found. There's no hard science saying if you throw a changeup to Josh Donaldson away that he isn't going to hit it into the Kauffman fountains or Reddick won't take out a kids eye in right field on a cutter away.

Per Brooks Baseball we can look at Shield's pitch usage this year. 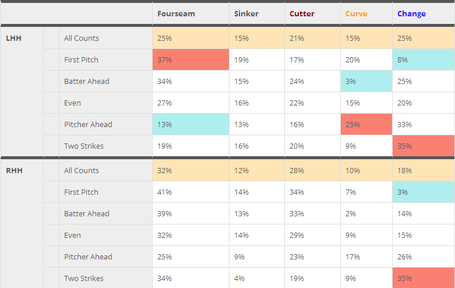 Against lefties, Shields relies on a fastball heavily for his first pitch and will shy away against the changeup. The graph shows what in theory is the best strategy against Oakland with two strikes or pitcher ahead counts: use the changeup.

Overall the matchup on paper looks decent for Shields. He has a 3.21 FIP at home with a 13 K-BB% and a 3.82 ERA in 103 innings against the Athletics. Shields took on Oakland a month and a half ago at Kauffman. He allowed 3 earned runs and 7 hits but that was more than enough as the Royals would put 3 runs on Jeff Samardzija and 3 on Ryan Cook for a 7-3 victory. I'd take that victory again, and so would you.

My fate cries out,
And makes each petty artery in this body
As hardy as the Nemean lion's nerve.