You gotta re2pect Derek Jeter. Hi2 cla22 will never again be 2een in a ba2eball 2tadium.

The Yankees are still very much in the Wild Card race, but have had to balance that competition with their fealty to Lord Derek Jeter, of the House Fistpump. Jeter is one of the most legendary Yankees of all-time, so in his last days, the team has to continue to play him every day, hitting second, despite the fact he is one of their worst hitters.

While some teams seem to be able to hit lousy hitters second in the lineup and get away with it, the Yankees are on the outside of the playoff picture, looking in right now. The Yankees are 72-66, four games back of Detroit for the final Wild Card spot, so they are fighting tooth and nail to avoid missing the post-season in consecutive years for the first time since 1992-1993.

The Yankees offense is a collection of names from the past making a lot of money, but with not much productivity to show for it. They easily have the league's oldest lineup (Baseball-Reference weighs team ages according to playing time and the Yankees are by far the oldest at 32.8 years old). However they have scored fewer runs than the Royals, and are fourth worst in the league with just 3.98 runs per game. The Yankees are eleventh in on-base percentage and tenth in slugging. 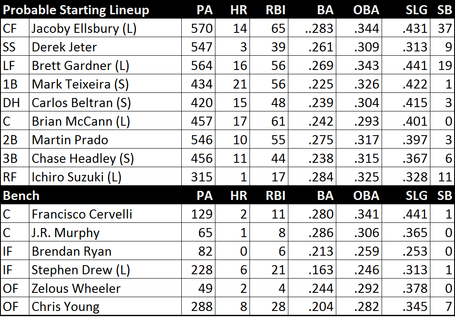 Chase Headley and Martin Prado have each hit well since coming over to the Yankees in trades at the July deadline. Prado is nursing a sore left hamstring and may miss action tonight however.

The Yankees pitching staff has been its strength, currently seventh in runs allowed at 4.17, just behind Kansas City. They have issued the fewest free passes, and have the fourth most strikeouts. They have allowed the most home runs though, with 80 of the 147 dingers given up at Yankee Stadium. The Yankees make up for that with an outstanding 3.62 strikeout-to-walk ratio at home, easily tops in the league. Friday starter Michael Pineda shut down the Royals for just one run over six-plus innings for an 8-1 win back in Kansas City on August 25 and has walked just four hitters in eight starts.

Yankees relievers are the only bullpen in the league with over 10 strikeouts per nine innings. They are home run-prone, having given up 48 home runs in 418 innings. David Robertson has filled in Mariano Rivera's shoes nicely with a 2.92 ERA and 35 saves in 38 opportunities. Robertson, Dellin Betances, and Shawn Kelley all come out of the Yankees pen with over 12 strikeouts per nine innings.