Tigers Series Preview: So, this is kind of a big series

Hold on to your butts, guys.

Share All sharing options for: Tigers Series Preview: So, this is kind of a big series

I don't know if you've noticed or not, but your plucky Kansas City Royals are in first place. They're being chased by the prohibitive favorite to win the division before the season, the Detroit Tigers, who have underachieved this year and stand at 78-65, two games back of Kansas City. While the Royals may be a "cute little team that needs to go away now," they can make a huge statement by winning this series in Detroit, on the road, against their biggest threat.

The Tigers have won 10 of their last 16, but are just 25-27 since the All-Star break. As Wendy Thurm on Fangraphs put it, the Tigers are really the anti-Royals in every possible way. While the Royals are built on pitching, defense, and baserunning, the Tigers are built on slugging. The Royals have a dominating pen, and a starting rotation that relies on its defense. The Tigers have a disaster of a pen, and a starting rotation that strikes hitters out.

Detroit is second in the league in runs scored, and top the league in batting average, on-base percentage, slugging percentage, and doubles. They are fourth in home runs with 137, 56% more than the Royals total of 88. Perennial MVP candidate Miguel Cabrera is having a "down" year, but is still one of the most feared hitters in the league. Victor Martinez has picked up the slack to be a dark-horse MVP candidate of his own. J.D. Martinez has come out of nowhere since being released by the Houston Astros to become a serious offensive threat. Rookie shortstop Eugenio Suarez has cooled down since his hot start, and is hitting just .235/.287/.259 over his last 27 games. Catcher Alex Avila missed time last week with concussion-symptoms, but was back in the lineup last night. 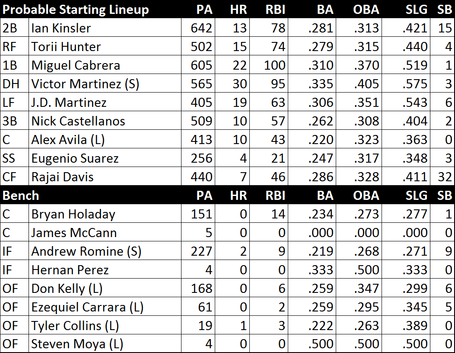 The Tigers weakness has been their pitching, particularly the relief corps. Overall Detroit has given up 4.39 runs per game, fifth worst in the league. They have given up the third-most hits and the sixth-most walks. They have done a decent job suppressing home runs, allowing the fourth-fewest in the league. The Tigers pitching staff fares much worse at home with a 4.24 ERA at Comerica Park, compared to a 3.83 team ERA on the road.

Justin Verlander, who has struggled with a career-worst season, has pitched a bit better as of late, but gave up seven runs in six-plus innings his last time out against Cleveland.

The Tigers bullpen has been the most glaring weakness on this team. Their 4.22 bullpen ERA is fourth-worst in the league, and their 2.02 strikeout-to-walk ratio is second-worst among relievers. Joe Nathan has struggled at times but has held onto the closer's role with 29 saves in 35 opportunities despite a 5.04 ERA. The Tigers have some situational lefties that be tough on lefty hitters such as Phil Coke (.213/.267/.340) and former Royals farmhand Blaine Hardy (.196/.258/.268). Righties Joba Chamberlain and Al Alburquerque have been solid in setup roles with over 8 strikeouts per nine innings.

Also don't forget our watch party Tuesday night at "The Well" in Waldo at the northeast corner of 75th and Wornall.