The micromanagement of instant replay

Share All sharing options for: The micromanagement of instant replay

Craig Brown, now at Royals Authority, once served as editor here when I was a mere cub reporter, and we got along famously. We shared much of the same philosophy when it came to the Royals and baseball, but there was one issue where we did not see eye-to-eye - instant replay.

I embraced instant replay, recognizing it as a technological innovation that could help sure accuracy in umpiring the game. Craig, well he disagreed.

MLB really needs to scrap replay. Until they can get the proper technology, it’s useless.

Oh my god. Burn replay to the ground. Put it in a bag, set it on fire and dump it in the river. #Royals

I WILL BE JUDGED TO BE ON THE RIGHT SIDE OF HISTORY WHEN IT COMES TO REPLAY. VINDICATION.

Initially, it seemed like replay was working out okay. Incorrect calls were getting overturned, like the pick-off of Carlos Gomez in Game 2 of the ALDS. This year, about half of the calls reviewed for the season were overturned, changing the outcome of over 600 plays. Reviews were not all the common, less than one every two games, and they were resolved quickly, taking less than two minutes to complete. The Royals were one of the biggest beneficiaries of replay this year, getting the highest-leverage outcomes overturned. 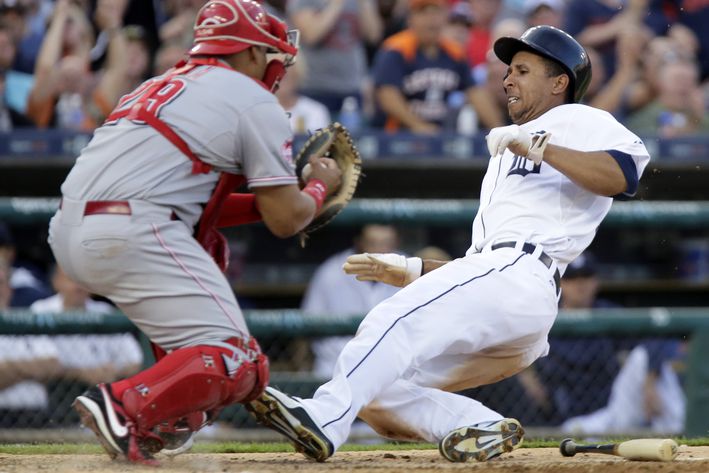 Replay was supposed to help make sure umps got the calls right. But a year later MLB still isn't getting the job done and teams are beginning to question why.

Of course, there were still errors. There was still a human element, with the eyes in New York still getting it wrong, like they did in a pair of plays in an Angels/Diamondbacks game back in May. There has been too much deference to the umpires on the field, requiring "clear and convincing evidence" to overturn their call, rather than allowing the replay official to make their own judgment call. There have been breakdowns in the system, like when MLB had to apologize for a glitch in replay when failing to overturn a safe call in Royals/Indians game back in June. There doesn't seem to be data on how long replay challenges took to resolve this year, but there are certainly cases of replay challenges taking very long to review. Still, there is no perfect system, and these are minor inconveniences to deal with outweighed by the accuracy of the umpiring.

The problem with replay is that it has ushered in "micromanagement creep". When I was in law school, I had a buddy (now a Royals Review reader!) who would constantly rant about the micromanagement of the rules in the NFL. What might seem like an obvious catch in real time could be picked apart in slow-motion replay, with rules now necessary to determine "when is the precise split second a player has caught the ball?" or "when is the precise split second a player has fumbled?" This came to a head in 2010 when Calvin Johnson seemingly caught an obvious touchdown, only to have it ruled incomplete because he failed to make a "football move."

Of course, what brings this all up now is yesterday's play in the seventh inning of ALDS Game Four between the Astros and Royals. Terrance Gore steals third base, quite easily, it appears at first glance. He does a pop-up slide, but pretty much stays on the bag. Pretty much. You see, for a split second Gore does come off the bag, and leaving aside for a second that even on replay Luis Valbuena never seems to tag with him with the glove, Gore would be out on replay.

The NFL-style micromanagement of the rules is now upon us. Tom Ley at Deadspin perfectly sums up why this is not what replay was intended for.

This isn’t really the kind of mistake instant replay was meant to rectify. There are certainly moments in which replay is a very good thing to have—determining if a home run really cleared the top of the fence or whether a ball is fair or foul come to mind—but the game is not served well when it’s used as a tool to reverse plays based on a base runner’s momentum popping his foot off the bag for a fraction of a second. Bases are hard, and I bet that if you looked at every slide in super slo-mo, you’d see a lot of feet popping a few millimeters off the bag for a split second. When a guy who’s functionally safe—and would be called such in most circumstances—gets called out like this, it makes the game more arbitrary, not less.

We, as fans, want baseball games decided by who is best at baseball, not who is best at combing over plays like a lawyer combs through a contract, looking for the smallest loophole to change the outcome. The spirit of the rule says Terrance Gore is safe. But the letter of the law says he is out.

And you could find violations of the letter of the law everywhere. Is the pitcher's foot a fraction of an inch off the rubber when he throws? Its a balk! Is the batter's back foot technically in the batter's box when he hits? He's out! Did the second baseman have his foot an inch off the bag when he turned a double play? The runner is safe!

Indeed, as Dan Brooks and Russell Carleton argue in Baseball Prospectus, it is in a manager's interest to challenge even the most trivial details. Sure, they are capped at one missed challenge per game - in the first six innings. But how many non-routine calls are there in a game? Not many. All it takes is one Bill Belichick-type coach - or a new Billy Martin - to try to exploit the rules by challenging trivial matters.

Instant replay, I supported you. You have some redeeming qualities. Ultimately, I think you can work. Throwing the system out completely, as Craig would want, would be throwing the baby out with the bathwater.

But replay is heading in the wrong direction. Stop the micromanagement and instill some common sense into the system. MAKE INSTANT REPLAY GREAT AGAIN.