North of the border, the Jays can mash.

The Toronto Blue Jays have spent the last two months destroying the American League, setting up an American League Championship Series that has seemed predestined since August. Although the Jays and Royals both nearly stumbled in the League Division Series, they carry the top two records in the league with the Jays winning 93 games, the fifth-highest total in franchise history.

Toronto had the best run differential in baseball at +236, the most by any team since the 2001 Mariners. Yet they struggled for much of the first half of the season, hovering around .500. It was not until their big mid-season gamble to acquire pitcher David Price, shortstop Troy Tulowitzki, and outfielder Ben Revere, that the team really took off. After July 31, the Jay won 40 out of 58 games, tops in the American League over that time.

The Jays offense has been the dominant force this season, scoring 891 runs, the most by any team in six seasons. They lead the league in doubles, home runs, walks, on-base percentage, and slugging percentage. Third baseman Josh Donaldson has had an MVP-type season, leading the league in runs scored and runs batted in. The Jays do hit better at their home, the Rogers Centre, but they were still the best-hitting road team in the American League this year, batting .260/.329/.431 with 47% of their home runs coming on the road. Donaldson in particular has had a huge split, hitting .330/.398/.647 at home, but just .263/.343/.487 on the road.

The Blue Jays walk a lot and hit home runs, but they're not big whiffers. They had the fifth-lowest strikeout rate in all of baseball, although Donaldson struck out 133 times. The Jays, oddly, hit better against ground ball pitchers than fly-ball pitchers this year. They were also pedestrian the third-time facing a starting pitcher in a game, hitting around league average. The Jays were the only team better than the Royals in batting average with runners in scoring position.

Reactions to the Royals/Jays bench-clearing 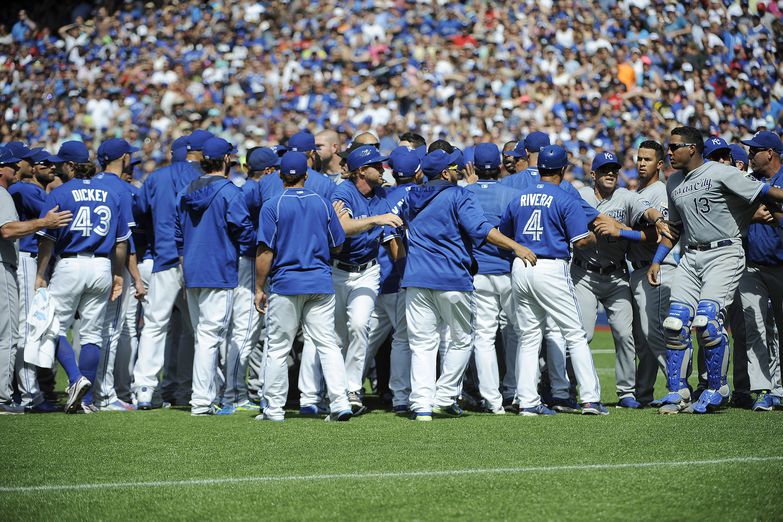 The Royals and Jays got chippy back in August

Defensively the Blue Jays are average, upgrading mid-season by replacing Jose Reyes at shortstop with Troy Tulowitzki. Donaldson is excellent at third and second baseman Ryan Goins flashes a plus glove as well. Centerfielder Kevin Pillar is one of the top ten defensive players in baseball, by Defensive Runs Above Average. The only defensive liabilities are Chris Colabello at first base, and Jose Bautista, who was one of the worst defensive right fielders in baseball this year.

The Blue Jays stole 88 bases, with the best stolen base success rate in the league at 79%. They were second in the league in Baserunning Runs, and were picked off just seven times, fewest in the league.

Manager John Gibbons, who once served as Royals bench coach, will begin his series with Marco Estrada, instead of David Price, who threw 50 pitches in relief on Monday. Estrada had a career year despite a significant drop in strikeout rate, although his BABIP was the lowest in baseball among qualified starters. Estrada relies on his changeup, which he throws 28% of the time, third-most among all starters.

David Price is in the discussion for Cy Young this year after leading the league in ERA and winning 18 games. Price pitched a complete game, 2-1 win against the Royals back in May, but gave up thirteen hits and five runs to the Royals in his very next outing. Price relies on his changeup and an improved cutter this year to go along with a 94 mph fastball.

Marcus Stroman missed much of the season with an ACL tear in his knee, but returned to dominate in four starts. Stroman stands at just 5'8'' but throws a wicked curveball, drawing comparisons to former Royals pitcher Tom Gordon. R.A. Dickey is a knuckleballer who allowed just two hits in seven shutout innings against the Royals in August.

Blue Jays relievers posted the fifth-best ERA at 3.50 and allowed the lowest walk ratio of any pen. The pen got stronger over the year after they sorted out their closer situation and gave the job to 20-year old rookie Roberto Osuna. Osuna has converted 20-of-22 save opportunities with a 2.58 ERA and 9.7 strikeouts-per-nine innings. Former Royals pitcher Liam Hendriks has turned into a valuable reliever, posting an ERA of 2.92 with 9.9 strikeouts-per-nine innings. The team also added veterans LaTroy Hawkins and Mark Lowe mid-season and their second-half bullpen ERA matches Kansas City's. Lefty Brett Cecil is out with a season-ending calf injury, leaving Aaron Loup as the only southpaw in the pen. Loup had a 4.46 ERA in 42 1/3 innings, with lefties hitting .275/.342/.362 against him.

The Jays took four of seven from the Royals this year, dominating at home in a series that featured a lot of chippiness between the two teams including a bench-clearing incident after Aaron Sanchez plunked Alcides Escobar. The Royals have already stated their intention to pitch inside, so expect the Jays to express outrage over any brushback pitches that are too close for comfort. The Jays are a very talented team, but the Royals won two more games. This is the American League showdown that has been inevitable since the summer, now we finally find out who is best.