This is a post about Julio Reyes. This is also a post about Edison Volquez. This is also a post about Edinson Volquez. The thing these three have in common is everything. In 2001, the pitcher we know as Edinson Volquez signed the name Julio Reyes to a $20,000 contract. He changed his name because it's what a scout told him to do, and baseball has created a system where international prospects don't question the hoops they're told to jump through. Julio Reyes served fine as a name. People used it to identify him. He answered to it. It completed all the tasks and functions of a name. Everyone was content. Everyone, but the US government. A 2003 immigration crackdown would force him to admit his forced deception and begin identifying by his real name, "Edison Volquez." Alright, great, now that issue is finally resolved. Right? Four years later, while examining his birth certificate, he noticed an extra 'n' in his given name, causing him to again change his name to it's current iteration "Edinson Volquez." We are eagerly awaiting the next development in this story.

Edinson Volquez grew up loving and idolizing Pedro Martinez. His friends and family called him "Pedrito" long before it was cool to call every young, short, Latino prospect "Baby Pedro." The nickname caught on beyond his inner circle when his Pedro-esque power fastball and deceptive change-up fueled his rise from chump change international signee to Baseball America's number 1 prospect in the Rangers organization. While he seemed to be the second incarnation of Martinez's fire, he lacked the pinpoint precision that made his nicknamesake death to steroid fueled American League batters. He walked nearly a batter every other inning in AAA, but compensated for this by dominating nearly everyone he didn't grant safe passage. The expectation was that his control issues would work themselves out as he grew older, as is often the case with raw talent such as his. The hype was real.

Volquez broke into the majors in 2006... and was total and complete butt. His ERA started with a 7, and he walked more batters than he struck out. He was still better than you, but probably not by a lot. The Rangers reacted to his obvious lack of baseball pitching skill, and his perceived lack of maturity and focus, by demoting him all the way to their High-A affiliate in Bakersfield, CA. He was demoted from the major leagues to one of the only cities that has managed to locate in a boring part of California. It was the player development equivalent of realizing you don't have enough Legos left to finish the roof required to keep your cat from rudely escaping the lovely house you're building for it. The only way forward is to rebuild from the foundation with a different strategy. In a 2010 interview, Volquez would claim he learned a lot and grew as a person during his demotion, proving he at least gained the focus and perspective to know that's the answer you have to give a reporter. He was probably really ticked.

Volquez quickly worked his way back through the minors. The Rangers then traded the rebooted Volquez to the Reds for one Josh Hamilton. Like most things, Volquez was much better once he got out of Texas. He started 2008 on a tear, leading the NL in ERA for much of the season and pitching in the 2008 All Star game. His dominance helped overshadow the struggles of rookie, and top prospect, Johnny Cueto. *clears throat* He faded a bit down the stretch, but he was still good for a 3.21 ERA and managed to finish the season fourth in the rookie of the year voting, even though it was known he was definitely not eligible for the award. Yes he outperformed his peripherals, but this was before the nerds found Twitter, so no one cared. He was still walking over 11% of the batters he faced, but ERA was still king then, and he was in its good graces.

Like the economy, Volquez got off to a rough start in 2009. He walked over 14% of batters he faced through his first 9 starts at which point his arm exploded, requiring Tommy John surgery. The surgery and a PED suspension knocked him out for over a year, and when he finally returned, he was bad. In 2011 he walked over 13% of the batters he faced, posted an ERA near 6, and spent a third of the year in the minor leagues.

After the 2011 season, Volquez was traded to the Padres where he became their resident Luke Hochevar. He was the perennial lackluster opening day starter for a bad starting rotation. The hype and hope was always that this would be the year he finally figures it out. He never really did. He benefited somewhat from pitching in Petco Park, but while the outfield was bigger, the strike zone was not. He continued to post double digit walk rates and after two disappointing seasons and a trade to the Dodgers, it seemed that his prospect glow had faded in the southern California sun. When he finally hit the free agent market after the 2013 season, he was viewed as more of an innings eater than an impact arm. Sometimes people tell me that baseball is weird and confusing. I don't really get it, but then I remember that "innings eater" is a baseball term. Touché.

When we are young, we can do incredible things. We can run, jump, swim, flip, control our bladders, not vote, and do nearly anything else within the limits of human potential. As we age, our bodies decay until they are incapable of performing tasks we considered trivial in our youth. Professional athletes have bodies that are just like ours, only better in every conceivable way. The young star is not a young star for very long, and is only a star for slightly longer. Injuries and the natural cruelty of biology destroy even the best bodies. Decline is inevitable. The easy narrative for an elite pitching prospect who shows a flash of greatness before suffering Tommy John surgery and never reaching his ceiling, is that his arm never fully recovered from being cut open and rearranged by another human being. It's the fear with every injured pitcher. Maybe they are no longer what they were and thus they will never be what they were supposed to be. 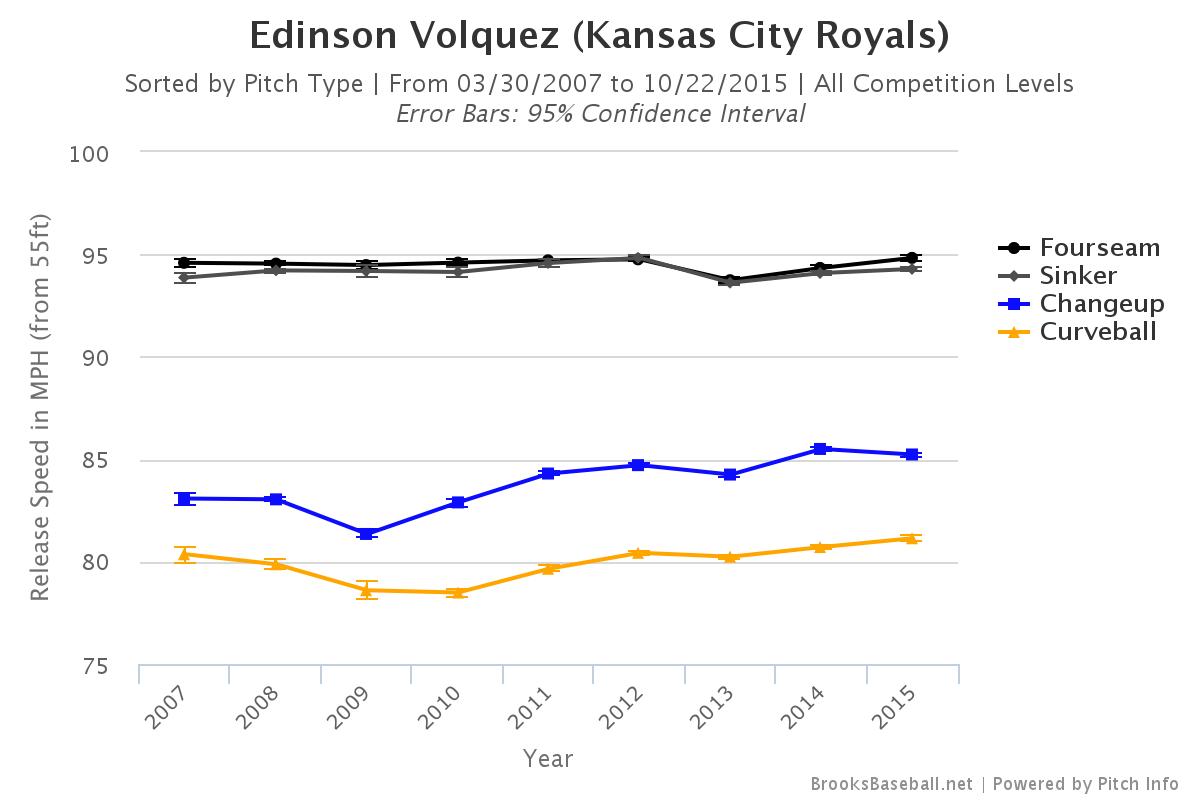 You could play shuffleboard on that line. You could build a Kansas on that line. You could even drive a Prius on that line. The line is very flat, is my point. Volquez's arm has aged better than his hairline. It would be easy to write him off as finished, but it seems he still has that fire that inspired comparisons to one of the greatest pitchers of all time. It seems that if someone could finally crack the code, there may still be a prize inside.

Everyone has that uncle who's always making weird stuff out of junk. He's always tinkering, fixing, restoring, and then usually, unfortunately, gifting. Baseball's weird uncle is Pirates pitching coach Ray Searage. After finding success reclaiming mid career pitchers Francisco "Can't picture his face for the life of me" Liriano and A.J. "How was this guy never a Cardinal" Burnett into staff aces, the Pirates took a 5 million dollar flyer on Edinson Volquez. What happened was, well, this: 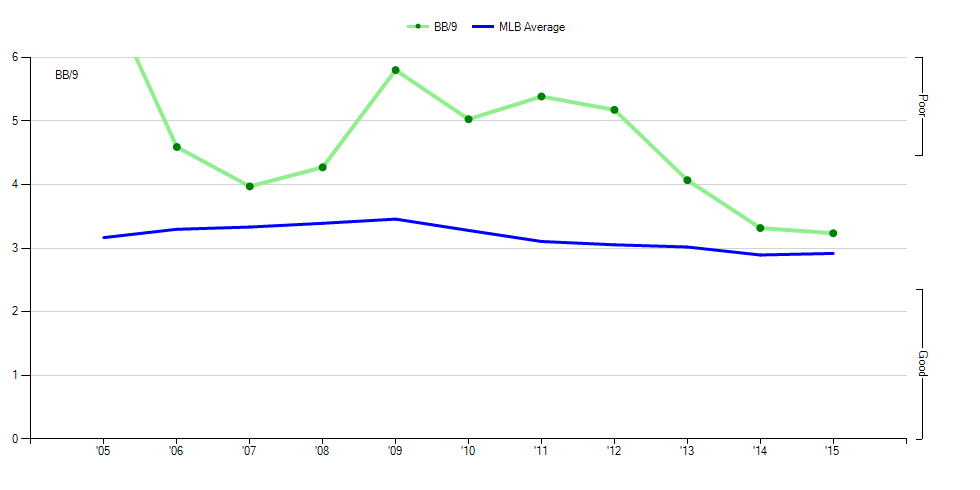 Lots of writers, smarter and better than me, have written about the possible reasons for this improvement. There may not even been a reason. The trend started before he arrived at Pittsburgh, so maybe this is all an effect of the a strike zone that is finally expanding to fit his appetite. Whatever the cause, Volquez started making progress for the first time in a long time. His strikeout rate dropped as well, so we don't see some kind of revolutionary improvement, but a combination of improved control, defense, and good fortune, led to Edinson Volquez posting a 3.04 ERA for the 2014 season, the best of his career.

The day the Royals signed Edinson Volquez was the day I learned I can yawn and groan at the same time. Signing a decisively meh pitcher for $meh seemed like the kind of fair, reasonable deal that fell far short of the salvation needed by a team I considered to be a .500 ball club. Dayton Moore get's paid to make baseball decisions. I get paid to do other things. This is the correct way of things.

I don't need to tell you about Volquez's season. You remember it... or maybe you don't. Volquez continually put up the kind of solid, yet unspectacular performances that frequently made him the answer to the question, "I know we won, but who pitched last night?"

I also don't need to tell you about Volquez's first two postseason starts. I will though. He lost his ALDS game 3 matchup with Dallas Keuchel, surprising his parents and no one else. He then put on an effective performance against the Blue Jays in game 1 of the ALCS. Hey Edinson, how did you feel about your game 1 performance? 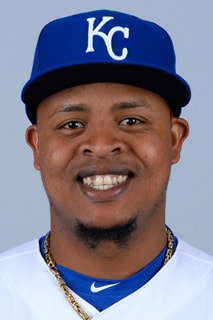 I also don't need to tell you about Volquez's game 5 performance. You haven't forgotten it yet. He cruised through the first 5 innings, allowing only one run. Yea, there were loud outs, but loud outs are heard for a moment, then forgotten. Then came the 6th. After a string of walks and a hit batter, there was a run on the board, and the bases were loaded with no outs. Edinson Volquez was removed from the only inning of that game he'll remember. It didn't end well, and it brings us to today.

Walks are one of the most frustrating things in sports. The batter you were tasked with retiring gets to put down their bat and walk to first base while your teammates look on. The trueness of the outcome is damning. Sports culture praises hard work and determination, but you can't improve your command by slaving in the gym or spending hours in the film room. Baseball is cruel. Bartolo Colon shaped pitchers thrive in the majors, while P90x Crossfit greek gods fail out of the rookie league.

Edinson Volquez has been blessed and cursed with only the visible half of his hero's gifts. He's built like Pedro. He throws like Pedro. He is like Pedro in every way except that he is not Pedro. His arm can give a ball electric life, but it's a life he can't command by force or will. This has been the demon on his back since he was Julio Reyes. He's been rebooted and reclaimed, but he still can't shake it. At one point, it was assumed he would eventually conquer it. At another point, it was assumed he would never conquer it. At another point it was assumed he was conquering it, and at the most recent point, he did not conquer it. We groan when he loses, because walks are one of the most frustrating things in sports. Walks make us angry, and what anger we can't avert to the manager, falls on the pitcher. Why won't he do what we know he is capable of doing? I just watched him throw a strike a few minutes ago. He shares our anger. The pitches that determine our entertainment and pride, determine his future. Volquez isn't done. If the Royals make the World Series, he'll pitch again, and we'll watch a struggle with 15 years of history play out on the biggest stage yet. Maybe watch with TUMS on hand.