Who would look best roaming around Kauffman Stadium?

The Royals will have an outfield hole to fill, possibly two if Alex Gordon breaks our heart and leaves. In addition to the question mark in left field with Gordo's status up in the air, the Royals have a potential hole in right field with free agent Alex Rios not likely to return. The Royals could fill that hole internally with Paulo Orlando, Jarrod Dyson, or a minor leaguer. If the Royals choose to go the free agent route, let's look at some of the names they may try to pursue: A complete list of eligible free agents is available here.

Best of the best

In addition to Alex Gordon, Cardinals free agent outfielder Jason Heyward should expect to command a deal at or in excess of $100 million. Yoenis Cespedes may not stay on the Mets, but he's not likely to jump to the team he lost to in the World Series since his asking price should be well over $100 million, and he is not willing to play right field. Dexter Fowler is coming off a fine season in Wrigley Field and would cost the Royals over $50 million plus a first round draft pick. With the Royals focusing their efforts on re-signing Alex Gordon, don't expect them to engage with any other top outfield free agents.

Rasmus has proven he can hit home runs in Kauffman Stadium. The 29-year old smashed 25 home runs for the Astros last year, and he wasn't a product of Minute Maid Park either, hitting more home runs on the road. Rasmus hit .238/.314/.475 overall, and has posted an OPS+ of 100 or greater in each of the past three seasons. The left-handed hitter does not fit the Royals team philosophy well with his high-power, low-average, high-strikeout approach. The Astros made him a Qualifying Offer, so signing him would mean forfeiting a first-round pick. Rasmus is likely looking for a three- or four-year contract at about $13-14 million per year.

Span fits the Kauffman Stadium philosophy much better with his speed and contact ability. The 31-year old left-handed hitter had the ninth-lowest strikeout rate among hitters with at least 250 plate appearances. Span does not hit for much power but can steal bases and has hit .300 in each of the last two seasons with a career .352 on-base percentage. Last year he hit .301/.365/.431 but missed more than half of last season with back issues then hip surgery. His defense has fallen off quite a bit in centerfield, and there is no telling how his hip will respond after surgery. However moving to a corner outfield spot could improve his defensive metrics and his bat should be a positive at the top of the lineup. Span should still expect a three-year deal at about $12-13 million per season.

Parra also fits the organization well as a two-time Gold Glove winner with a strikeout rate below the league average. The 28-year old left-hander hit .291/.328/.452 with 14 HR 51 RBI last year with the Brewers and Orioles. Parra's walk rate has shrunk to microscopic levels, but that likely won't bother the Royals too much. Parra has good gap power with 43 doubles in 2013 and 36 last year. Parra's defensive metrics were oddly terrible in 2014, but that could be an aberration as his numbers look very good in past season, particularly in the corner outfield spots. Parra should probably expect a two- or three-year contract at about $8-10 million per season.

A Chris Young worked well for the Royals last year, so why not add another this season? Outfielder Chris Young revived his career last season with the Yankees, hitting .252/.320/.453 with 14 HR 42 RBI in 356 plate appearances. The 31-year old has moved to the corner outfield spots where his defense plays much better. Young might not be a fit for the Royals due to his high strikeout rates, but he could be a lower cost option on a two-year deal worth about $5-6 million per season.

The Royals were interested in Byrd back in 2014 and reportedly had a deal for him, but Byrd would not waive his no-trade clause without the Royals picking up his 2015 option. Byrd is 38 years old and a major defensive liability at this point, but he can still hit the ball out of the ballpark with 20+ home runs in each of the last three seasons. He hit .247/.290/.453 with 23 HR 73 RBI with the Phillies and Giants last season. Byrd is a high-strikeout, low-walk hitter and shouldn't expect anything but a one-year deal worth $7-10 million.

A reunion likely isn't in the works, but Aoki did have the lowest strikeout-rate in all of baseball last year and was having a fantastic season until he broke his leg after being hit by a pitch in June. He ended up hitting .287/.353/.380 in 93 games, but missed the last month with a concussion. The Giants surprisingly rejected his $5.5 million club option, so Aoki will likely look for a cheap one-year deal somewhere.

Son is a 27-year old corner outfielder with the KBO Lotte Giants in the Korean Baseball League. He is expected to be posted to be bid on by Major League clubs, although it is not a guarantee at this point. The left-handed hitter is not your typical "high-contact" hitter from the Far East, striking out at a fair rate, but also drawing a fair amount of walks. He hit .324/.412/.476 last season although many Korean ballparks are smaller than Major League ballparks. The Royals would have to pay a posting fee plus Son's salary, but power-hitter Jung-Ho Kang cost the Pirates just $5 million in a posting fee plus a $11 million contract over four years, so Son could still prove to be a bargain.

Filling from within: Right Field 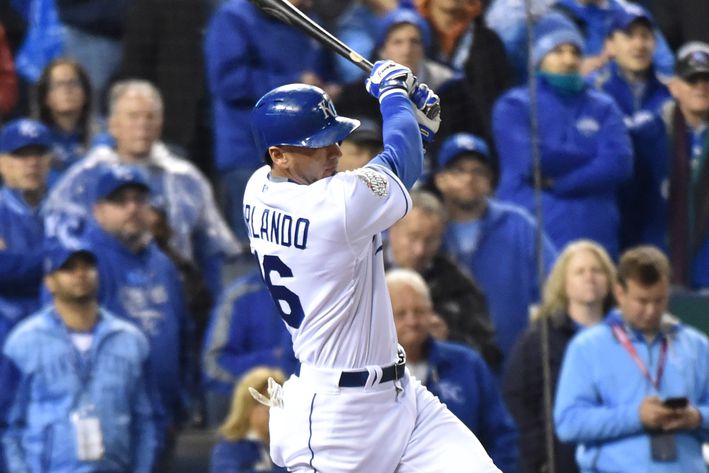 Who are the best internal options to fill right field?

Davis has been a 1 WAR player in each of the last three seasons, and hit .258/.306/.440 with 8 HR 30 RBI in 370 plate appearances with the Tigers. The right-hander is a high-strikeout, low-walk hitter who can steal bases, with over 322 swipes in his career. He is 35 years old, but was a solid defender in left-field last season, although his metrics before that are less appealing.

Brown was surprisingly let go by the Phillies despite being just 28 years old and a former All-Star as recently as 2013. The former top prospect has been dreadful for the last two seasons, hitting just .228/.284/.349 in 63 games in 2015. He has been a decent hitter in his career against right-handers, with a line of .251/.314/.423. Brown is a poor defender, but is young, with some potential, and should be fairly cheap.

Ruggiano was let go mid-season by Seattle, but his numbers combined with the Mariners and Dodgers were decent over 141 plate appearances with a line of .248/.333/.472. Ruggiano is a career .272/.336/.520 hitter against left-handed pitching and should be available on a very cheap one-year deal.

Stubbs had a terrific 2014 season, although it was inflated by playing at Coors Field and he predictably regressed in 2015. The right-hander hit just .195/.283/.382 and actually had a reverse split with the Rockies and Rangers, but he has historically hit left-handers well with a line of .276/.350/.454. The 31-year old is a solid defender at all three outfield positions and should be cheap on a one-year deal.

Bottom of the Barrel

The former Royals outfielder can still draw a walk or two, but can only play against right-handers and hit just .233/.297/.330 last season at the age of 35.

Frenchy revived his career with the Phillies last year, hitting .258/.285/.433 with 13 HR and is still just 31 year old. However his numbers were mostly a product of Philly's bandbox stadium and he is still a major defensive liability.

The Royals once coveted Snider as the centerpiece in a potential Zack Greinke deal, and have been linked to Snider this off-season. The former top prospect has become a disappointing reserve outfielder who hit just .232/.313/.350 in 87 games with the Pirates and Orioles in 2015.