The Royals roster battle for the 25th man

Share All sharing options for: The Royals roster battle for the 25th man

The Royals sent Brandon Finnegan to the minors over the weekend, along with eight other players, leaving the total number in camp at 38. Over the next two weeks, the Royals will pare that number to 25 for the April 6 season opener against the White Sox. The Royals have had a relatively quiet spring training, with not many roster spots up for grabs. Here are the players with roster spots locked up:

That's 21 players. Tim Collins, Luke Hochevar and Kris Medlen will begin the season on the disabled list. Rafael Furcal seems likely to begin the season in some sort of rehab to get into playing shape.

Christian Colon will likely have a spot as the reserve infielder. Franklin Morales sounds like he will likely grab a spot in the bullpen. Louis Coleman has fourteen strikeouts and no walks in spring training, and is out of options so I think he probably has a bullpen spot locked down. That leaves one roster spot available to the following eleven players.

Joe Blanton - It seems a bit excessive to have eight relievers, particularly when you have such a good bullpen, but the Royals are supposedly considering this idea. Blanton hasn't pitched professionally since 2013, but he has been decent in camp so far. He has allowed a lot of hits - thirteen - in just 9 2/3 innings, but has allowed just three runs. He's a non-roster invitee, and seems a bit of a long-shot to make this club.

Brian Flynn - Flynn, acquired this past winter from Miami for Aaron Crow, has reportedly impressed the Royals in camp. He has given up just two runs in over ten innings of work with a WHIP under one. Flynn had a pretty good split against lefties in the minors last year, and could be a versatile long-man if needed as well.

Jandel Gustave - Gustave is a Rule 5 draft pick, meaning he must make the roster all season or be offered back to the Astros through waivers. Gustave can hit the upper 90s on a regular basis, but is making a huge leap from Low A ball, where his numbers were not dominant in the strikeout category. He has held his own in camp however, with a 3.68 ERA and the club could look to stash him as a future asset.

Ryan Madson - The former Phillies closer has pitched just one inning professionally since 2011, but is looking to make a comeback at age 34. He has suffered from back problems in camp so far, but has managed to pitch five innings, allowing just one run with three strikeouts and no walks.

Casey Kotchman - Kotchman also did not play professionally last year. He only has one plate appearance in camp thus far, so he's almost certainly not making the club.

Ryan Jackson - Jackson has had a fantastic camp, hitting .375 with 6 walks in 14 games. He is known for being a good glove man, something the Royals value, especially to fill in at shortstop if needed. Jackson seems to be constantly claimed off waivers, having bounced from the Cardinals to the Astros to the Padres to the Dodgers to the Royals in the past two years, so the Royals may want to avoid exposing him to waivers once again.

Gabriel Noriega - Noriega has a lousy track record in the minors and hasn't hit much in camp, so it seems a formality he will be sent down soon.

Ryan Roberts - Roberts has 518 games of Major League experience under his belt, but is 34 and he hasn't had a great camp at the plate, hitting .240/.296/.360. Roberts has played just three innings of shortstop in the big leagues, which could hurt his cause, although he does have some experience in the outfield.

Your Guide to Royals players in spring training camp 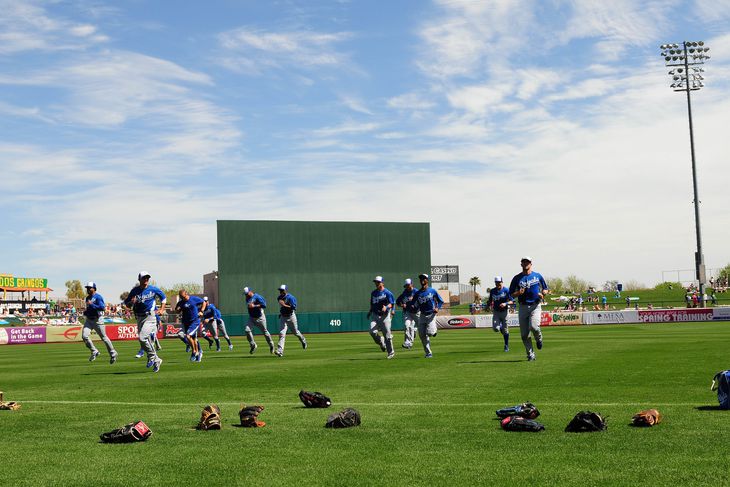 A summary of everyone trying out for the Royals.

Whit Merrifield - Merrifield hasn't gotten a ton of action, but has hit well with a line of .308/.357/.462 in 14 plate appearances. Merrifield has some positional versatility as he can play the infield in a pinch. The 26-year old right-handed hitter hit .340 for Omaha last year and was named Royals Minor League Player of the Year.

Paulo Orlando - The 29-year old Brazilian has been on a tear in Arizona, hitting .391/.417/.696 with a home run in 24 plate appearances. Orlando may be a late bloomer who could hit his way onto the club as a right-handed bat.

Moises Sierra - The Royals claimed the 26-year old right-handed hitter off waivers from the White Sox last fall. He has 180 games of Major League experience, and has hit .308/.423/.409 in 26 Cactus League plate appearances.