To long-time Royals fans, the middle infield has been amongst the most frustrating of positions to fill with solid players. Memories of Desi Relaford, Yuniesky Betancourt, and Chris Getz burn in the back of the minds of Kansas City. There may have been high batting averages and a whole lot of grit, but minimal production was a consistency. Knowing serious contention was ahead, the Royals front office went after an attractive free agent second baseman in Omar Infante. Coming off a career year of .318/.345/.450 season with the rival Detroit Tigers, Kansas City signed Infante to a four year, $32 million deal. The Royals had their second baseman-or so they thought. Throughout his career, Infante has been average offensively, but Kansas City hoped the good times would roll on for Infante's bat after a solid 2013. Unfortunately, Infante returned to a mediocre performance in 2014, posting a slash of just .252/.295/.337 in 135 games. Sure, a nagging shoulder injury affected his play, but the seriousness of it was probably not too severe considering he was never sidelined for an extended period of time. I look to what truly is causing the problem, and see if there is a remedy.

To find it, let's look at a player who had a very similar 2014 campaign: Jason Kipnis of the Cleveland Indians. Both are second basemen, play in the AL Central, had down years after breaking out in 2013, and suffered nagging injuries.

Where the problem lies

The two have very similar statistics for the most part, besides a large difference in stolen bases. What's interesting, however, is that most analysts believe Jason Kipnis will have a potentially major bounce back year, but do not have the same for Infante. There a few obvious reasons, like speed, age, and greater power potential, but that still does not explain why so much more production is expected out the Indians second baseman. When you look at the two's isolated slugging percentage (ISO), a key statistic to evaluate production, they look extremely similar at .090 for Kipnis and .085 for Infante. ISO is generated by subtracting slugging percentage from batting average to measure the player's ability to get extra-base hits. As you can see from the chart below, neither second baseman was too spectacular in 2014.

Why such greater outlook for Kipnis than Infante, then? I turn to Brooks Baseball Zone Profiles for the answer. First, we'll see the heat map of Isolated Power. The, we'll see where pitcher's locate their pitches as a result. Kipnis is a left-handed hitter, so he is standing on the right side of his graphs, whereas Infante is a right-handed hitter, so he is standing on the left side of the graph. The maps are from plate appearances in 2014. 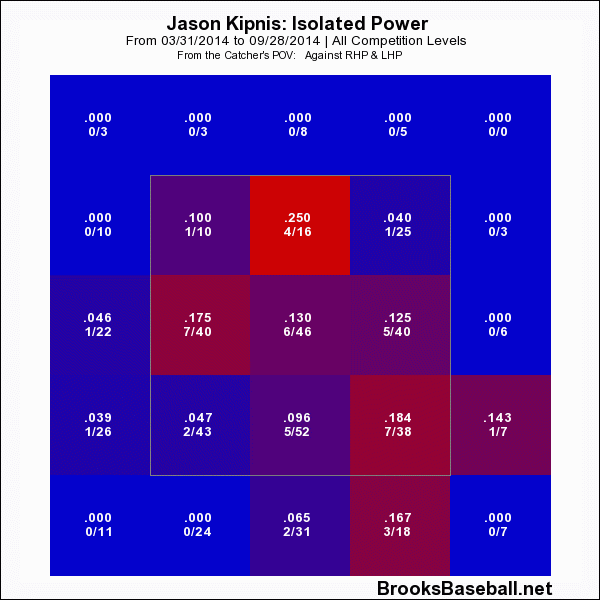 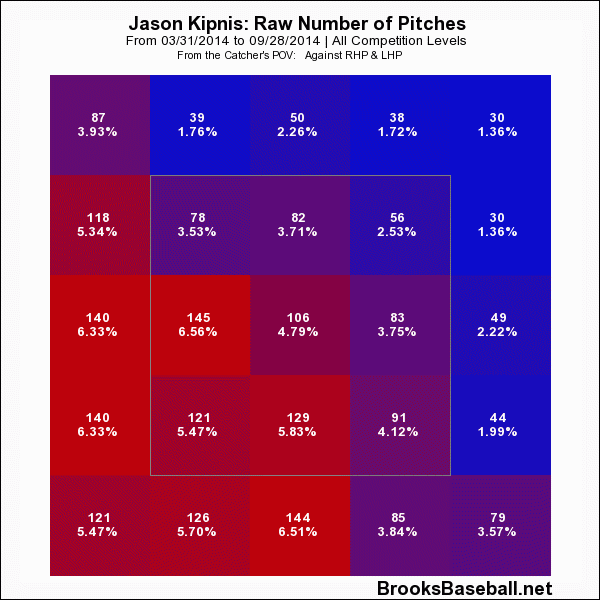 We can see a few things from this: Kipnis hits each part of the strike zone pretty well. Like most players, he struggles with the outside pitch, but he lays off it quite a bit due to his ability to walk relatively well. Kipnis also hits the low ball for power well, which is absolutely huge in today's game. The strike zone has been expanding downward each year at an unreal rate: low pitches that not called for strikes in 2009 are now in the zone 47% of the time. Kipnis' versatility in hitting for power almost anywhere in the zone is a prime reason for his candidacy as a major comeback player. 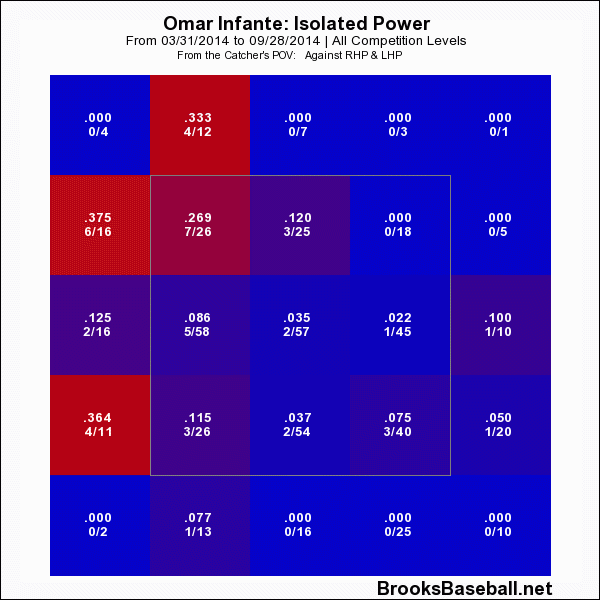 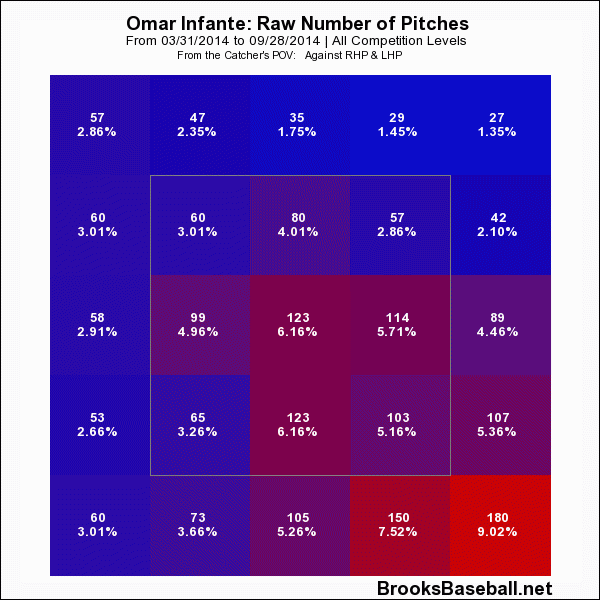 This is really bad. Like, really bad. Infante only generates power when the ball is inside, or inside and up. This is a major problem because the large majority of the pitches he faces are outside or in the middle of the zone. Here's another harsh truth: MLB players, some would say most Little League players, can hit the ball down the middle for power. Infante can't. It's a mystery to us all, and he needs to fix this issue if he wants to resemble anything of a competent MLB hitter.

Yes, this is a simple analysis only concerning extra-base hits across the strike zone, but it weighs heavily in Infante's value as a player. It does not tell everything about Infante's game, though it raises huge red flags. The issue is that Infante probably will not produce more. He may be able to heal his shoulder and his new elbow injury. He may be able to cut down on swinging at terrible pitches outside. He may be able to raise his BABIP. But he probably will not be able to generate more power in his swing, given the pitches he receives, his sweet-spots, and inability to hit perfectly normal strikes for extra-base hits.