Are the Indians the media darling of the Central now?

The Indians have been a sleeper pick to win the division the last few years, due to a solid nucleus, but have fallen short. They made the Wild Card game in 2013, but won just 85 games to fall short to the Royals and Athletics last season. The mainstream media has taken notice however, and the Indians have become a popular pick not to just win the division, but to win the pennant.

The Indians stumbled badly out of the gate in 2014, dropping 17 of their first 27 games. By May 18, they were already 10.5 games out of first place with the third worst record in the league. Slugger Carlos Santana was a big reason why the Indians slumped, with a brutal start as he attempted to learn to play third base. Santana did not get over the Mendoza Line until late June and was hitting just .207/.349/.388 by the All-Star break.

The Indians pitching was also a mess early in the year. Justin Masterson struggled mightily, and was shipped to St. Louis in a mid-season trade. Rookie Trevor Bauer struggled with an ERA at 4.39 over the first three months of the season. Eventually, the pitching staff was sorted out, and in the end, Indians starter struck out more hitters than any other starting pitching staff in the league. They were led by Cy Young winner Corey Kluber, who struck out 10.3 hitters per nine innings, the fourth best in baseball.

The Indians caught fire in August, going 18-9 to climb back in the Wild Card race. Left-fielder Michael Brantley emerged as one of the best outfielders in the game, hitting .327/.385/.506 with a 7.0 rWAR season, finishing third in MVP balloting. Carlos Santana would rebound to enjoy a productive season hitting .231/.365/.427 after settling at first base. The Indians would eventually win 85 games to finish three games back of Oakland for the final Wild Card spot.

The Indians had a quiet off-season, content to roll in 2015 with the same nucleus. They did add slugger Brandon Moss, who swatted a pair of home runs for Oakland in the Wild Card game against Kansas City. Moss hit .234/.334/.438 with 25 HR 81 RBI as an All-Star with the Athletics last season, and is expected to serve mostly as a designated hitter with some time in right field for Cleveland. Moss can probably expect a boost in his offensive numbers moving from O.co Coliseum in Oakland to Progressive Field in Cleveland, although he'll likely always be a lower batting average guy who can draw walks and hit some homers.

Carlos Carrasco was once a promising pitching prospect whose career was derailed by Tommy John surgery. He returned in 2013 for 15 games, but finally took a step forward in 2014 with a 2.55 ERA in 134 innings between the bullpen and starting rotation. Carrasco had a 5.29 ERA going into last season, so his track record is still pretty spotty, but the Indians are very encouraged by his 1.30 ERA in his last ten starts to end the year. Carrasco did have a low BABIP of .274 last season, so his ERA could rise, but with a strikeout rate of 10 per nine innings as a starter last year, Carrasco has the stuff to become a solid piece of the rotation. He will likely slot in as the #3 starter in the rotation after Kluber and Trevor Bauer, and ahead of T.J. House and Zach McAllister, so the Indians will need him to reach the potential scouts saw in him before his injury.

Indians by the Numbers

The Indians need their starting pitchers to miss bats so much because their defense is pretty atrocious. Aside from catcher, where Yan Gomes is among the best at his position, and shortstop, the Indians were in the bottom six in baseball at defense at every position last year. Carlos Santana may be able to improve to "passable" at first base now that he's had an entire off-season to prepare there, and the Indians could get a huge boost defensively when they promote top shortstop prospect Francisco Lindor, an excellent glove man.

The Indians are banking largely on rebounds from players who had disappointing seasons last year. Second baseman Jason Kipnis posted a .640 OPS last year, easily the lowest of his career. Michael Bourn battled nagging injuries all season and put up a .674 OPS, his worst since 2008. Nick Swisher's performance fell off a cliff last year. Carlos Santana had a rough first half but came on to hit in the second. Lonnie Chisenhall had the opposite problem, getting off to a torrid start only to collapse in the second half. 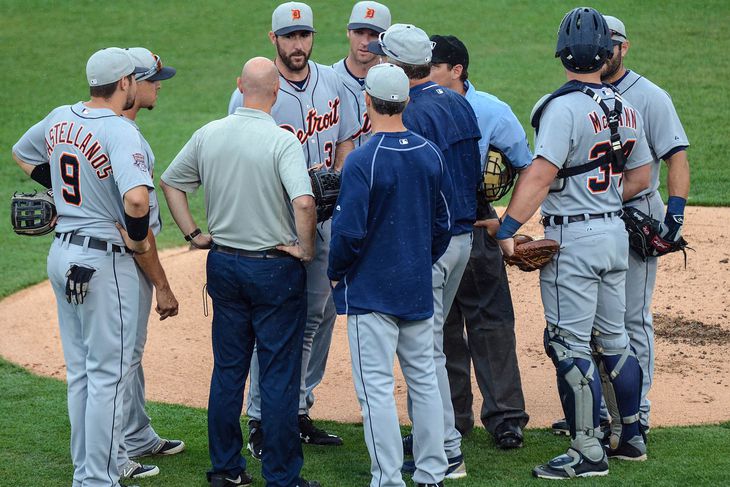 Its easy to see why the Indians are a popular pick to win the division. They do feature many talented players in the prime of their careers with a pitching staff that can miss a lot of bats. They have a smart management team in place, with one of the most respected managers in the game in Terry Francona. Fangraphs projects them as the fourth best team in the league, with solid contributions at every position except designated hitter, and the fifth-best starting pitching staff in baseball.

Still, with a lower-scoring environment, it appears there is a premium on defense these days. If the Indians continue to struggle converting outs in the field, it could be the weakness that keeps them again from ending decades of pennant-less misery in Cleveland.