Spring is a time for optimism in baseball. Every slate is wiped clean, everybody starts at 0-0, and everyone has a chance to win the World Series.

Except the Phillies. Sorry, Phillies.

When it comes to the Royals, we’re no strangers to misguided optimism.

"While it doesn't take much to imagine the Royals leapfrogging the rest of the division, there's even a scenario that the Tigers stumble and Kansas City sees itself in the playoffs for the first time since 1985."

"So this could be the year the Royals shock everyone by making a huge turn-around. I don’t think a 10-win improvement is out of the question, and a 90-win season would be overwhelmingly shocking to the masses but shouldn’t be. This team has some nice talent just waiting to break out."

If you Google "Kansas City Royals optimism" for any years farther back than that you get about eleven tangentially-related results and Google asks if you meant the Kansas City Chiefs instead.

The Royals have a fanbase hardened by years of disappointment. So now that the Royals finally shocked the world, followed through on that optimism and won a pennant, we’re not going to crazy, are we?

Earlier in the spring I started keeping track of every time a Royals player was mentioned in Rumblings as being a breakout candidate, or in the best shape of life, or ready to turn the corner. Given that this is spring, after all, this exercise proliferated from a manageable list to a monstrous table. Here’s the current status of that table: 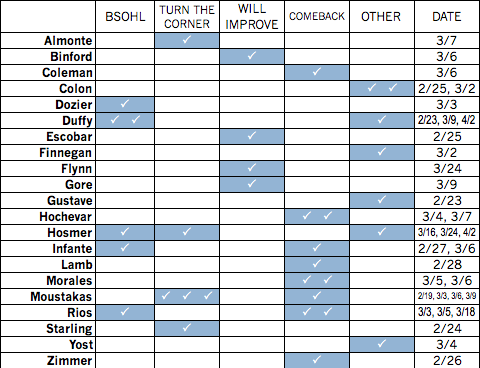 There are columns for "The Best Shape of His Life", "He’s Going to Turn the Corner", "He’s Going to Improve, But Not to the Extent That a Corner is Turned", "This Guy is Going to Bounce Back", and "Gosh-darn it, He’s Just Going to Do a Good Job."

Now that the Royals have departed Surprise, I thought it might be worth it to analyze the table and see if we can use it to predict who’s actually going to improve this year. (Spoiler alert: This isn’t going to work.)

Moose appeared on the list a team-leading four times. Most of those appearances involve him turning some kind of a corner, though in one case he was listed as a bounce-back candidate. What he’s bouncing back to, I can’t tell you.

It only makes sense to expect Moustakas to improve this year, because he can’t really get any worse than he was last year (I hope). But at this point, there’s quite a bit of healthy skepticism surrounding him. Sure, he caught on fire in the postseason, but isn’t it more likely that the Royals end up getting burned for yet another season?

The best case scenario for Moose probably involves the fans not counting down the days until Hunter Dozier arrives in the majors. (Dozier, unlike Moustakas, is evidently in the best shape of his life).

If Danny Duffy really is in the best shape of his life, that’s good news for the Royals, who desperately need him to be consistent and healthy all year to help absorb the loss of James Shields.

What’s more troubling about this category is the lack of Royals who cracked the list. Eventually we get tired of hearing the same cliché on repeat, but only four other Royals were mentioned.

One, Dozier, is irrelevant to the major league team at this point. Another two – Alex Rios and Omar Infante – are already broken again. (To be fair, Infante’s was more like "The Best Possible Shape At This Point, All Things Considered")

For a team that really needs to stay healthy if they want to contend, you’d think the Royals would be making fitness a bigger deal.

Which of these players are you most confident about bouncing back?

Okay, that was a silly question. Which of these players not named Luke Hochevar are you most confident about bouncing back?

The answer is probably neither. The articles on Morales and Rios fit the mold of gratuitous spring training optimism. Of course the Royals are going to try to sell Morales and Rios as candidates for improvement because they don’t want to admit to being wrong three months after they signed them.

For Morales, there’s a troubling message hidden beneath the comeback claims. We haven’t seen any of those bounce-back articles in nearly a month. His improvement is key to the Royals’ success, but we haven’t seen many articles suggesting he’ll actually improve – not even spring training fluff pieces.

The player that I’d probably most like to see listed in this category is actually Alcides Escobar. To put it mildly, Escobar did not have the best offensive season last year. If he’s going to be hitting leadoff, he needs to bounce back to at least his 2012 numbers (preferably even better than that).

Gosh-darn it, he’s just going to do a good job: Christian Colon (2)

If Christian Colon can be that guy this year, I think we’ll all be happy. I know several people probably want him starting over Infante, but I don’t think he’s quite ready for that role. This is the next step for Colon, and gosh-darn it, he should be able to do a good job.

On the other hand, the other people who cracked this category include Brandon Finnegan (in the minors), Jandel Gustave (no longer with the team), and Ned Yost (is Ned Yost). Make of that what you will.

Eric Hosmer appeared on the list three times, in three different categories, at three different points in spring training. Hosmer is apparently in the best shape of his life, ready to turn a corner, and is going to do a gosh-darn good job this year. I’ll be happy if he hits one out of three this year – literally and/or metaphorically.

Of course, we’ve been saying the same things for years about Hosmer. But given the distribution of the improvement claims, especially relative to the other players on the roster, Hosmer appears just as likely to break out as anyone else on this squad.

So mark that down: Eric Hosmer is my breakout candidate of the year.

And then take that with a grain of salt, because last year I said it was going to be Moose. Whoops.

Not Everyone Will Improve

There were actually a good amount of Royals that didn’t make the list. That’s fine for some, because they’re already so good that it doesn’t matter too much. But there are a few others which are a little worrying. Really quickly, here are the Royals who are apparently not going to improve this year:

Already so good it doesn’t matter (4)

Alex Gordon, Greg Holland, Wade Davis, and Kelvin Herrera. Gordon barely played in spring training so he gets a pass, and the bullpen is the bullpen.

We know what we’re getting (4)

Jarrod Dyson, Jason Vargas, Jeremy Guthrie, and Jason Frasor. There’s nothing too flashy here. At this point we know they're not going to improve, but they’re still solid contributors.

Lorenzo Cain and Edinson Volquez. Unfortunately, there’s not much more they can do beyond last year’s strong performances. An "improvement" for them is simply maintaining their numbers from 2014.

Salvador Perez and Yordano Ventura. Perez needs to bounce back from his abysmal second half if the Royals want to contend this year. And maybe I’m being selfish with Ventura, but I really want to see him get even better, especially now that he’s signed that long-term extension.

There are several other players on the Royals’ roster that aren’t listed, but they aren’t going to have as large as an impact on the team as the ones listed above.

Who do you think is going to improve the most in 2015?

Which of these Royals players will be most improved this year?