Let's get off to a good start, shall we?

The White Sox lost 89 games last year, but it was a rebuilding year and the team added several foundations this past off-season. Chicago had the second-youngest pitching staff last year, but they added right-hander Jeff Samardzija to their rotation in a surprising trade with Oakland, then added free agent relievers David Robertson and Zack Duke to improve a bullpen that was the second-worst in the league last year. The White Sox also splurged on their starting lineup, adding former Royals outfielder Melky Cabrera and Fort Scott, Kansas-native Adam LaRoche to hit around their star rookie slugger Jose Abreu. 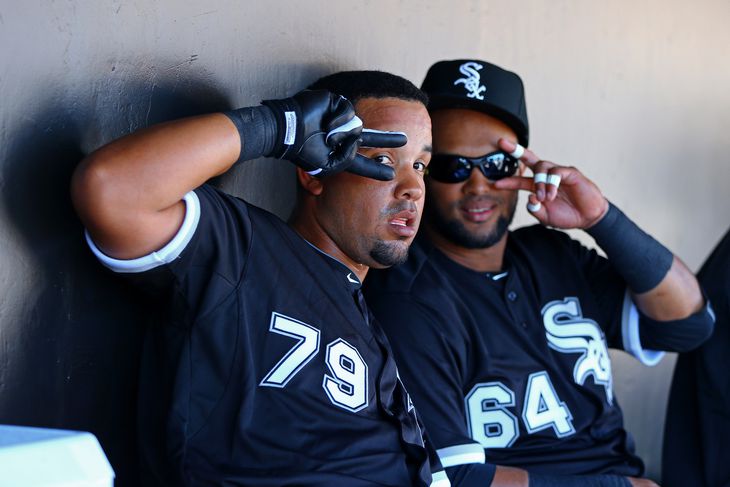 The lineup is still rather young, with 26-year old centerfielder Adam Eaton setting the table at the top of the lineup. Eaton was a pest to the Royals last year, hitting .368/.430/.500 in 19 games against Kansas City. Melky Cabrera settles in nicely in the two-hole, providing plenty of baserunners for last year's Rookie of the Year, Abreu.

The White Sox lineup is not deep however, and the quality of hitters drops off significantly with the bottom of the lineup. Chicago will be hoping right-fielder Avisail Garcia can bounce back from injuries and live up to some of the potential he showed with Detroit when he first came up. Chicago also has high hopes for the rookie Micah Johnson, who had a terrific spring training and won the starting second baseman job. Johnson has speed to burn, with 83 steals in his last healthy season in 2013, but also showed good on-base skills in the minors.

*-spent all of last year in AA/AAA

Left-handed ace Chris Sale, who led the league in strikeout-rate and posted a 2.17 ERA, will miss the first week of the season with a foot injury. Stepping into his place for the Opening Day assignment will be Jeff Samardzija, who was acquired from Oakland last winter for infielder Marcus Semien, catcher Josh Phegley, and pitcher Chris Bassitt. Jose Quintana, one of the most underrated pitchers in the league, has struggled against the Royals in his career, going winless in twelve starts with an 0-6 mark and a 4.38 ERA.

Even with David Robertson closing and Zack Duke providing lefty-specialist help, the White Sox bullpen is still a work in progress. Relievers Nate Jones and Jake Petricka will both begin the year on the disabled list, with Jones out for the year with Tommy John surgery. Zack Putnam put up solid numbers in his rookie year last season, but his strikeout-to-walk-ratio was an underwhelming 2.3 and he had a BABIP of .257. Dan Jennings was acquired over the winter as a potentially useful lefty arm. The rest of the pen could very well be in AAA before too long, with Javy Guerra, Matt Albers, and Kyle Drabek taking up space.

The Royals were able to beat up on Chicago a bit, taking 13 of 19 contests, although they were just 5-4 against the Pale Hose in Kansas City. Chicago should prove to be a much tougher matchup this season, but perhaps the confidence from seeing that "American League Champions" pennant raised on Monday will carry the Royals to a series win.