Plus: Whit Merrifield on the finer points of base stealing, and Christian Binford's plans to keep his control pristine.

The Omaha Storm Chasers begin their season on the road on Thursday, but the players were in Omaha Tuesday afternoon for media day and some practice. Manager Brian Poldberg led the team to a Triple-A National Championship in 2014, and thinks this year's team could be even better.

"On paper, we've got a better team than we had last year going into it," he said. "But still, you've gotta get out there and you've gotta play."

Several Chasers players, like super-utility man Whit Merrifield and outfielder Brett Eibner, made a strong bid to make the big league club in spring training, however, both ended up back in Omaha. Poldberg said if injuries to Omar Infante or Alex Gordon turn out to be nagging issues, he likes Merrifield as a backup option since he can play both infield and outfield.

"He goes out and plays every out like it's his last one. He's hustling, he plays all the different positions, and he just loves the game."

Merrifield, for his part, said this Omaha squad is a deep team in all aspects. He said he is working on defense at several positions, saying that the goal is to not be in Omaha. He went on:

"We know we're one step away, so it's pretty good motivation to come to the field and get your work in, to be prepared in case somebody up there [in the Majors] sprains an ankle, or tweaks a hammy or something, and you get the call."

Merrifield adds he worked with Royals coach Rusty Kuntz this spring on his base stealing.

"I've been around 30 [stolen bases] every year up until last year, and I need to get better with that, and get my percentage better," he said. "Sometimes I get a little antsy, and I see my numbers are a little down, so I'll just run, and I get thrown out a little more than I need to."

In the absence – however long it lasts – of fan favorite Paulo Orlando, Poldberg was asked who fans might look forward to seeing. He mentioned Eibner, and said Moises Sierra might have the "Peguero power" fans would enjoy, alluding to Carlos Peguero, Omaha's hitter of the year last fall, who was briefly considered for the starting right field job in Kansas City, but is now with the Rangers organization.

"We've got a lot of guys that are proven at Triple-A, and some that aren't proven," Poldberg said. "And it's gonna be fun to see how they develop throughout the year."

As for pitching, Christian Binford should be a big part of the Omaha staff. Poldberg likes his pitch mix but put more emphasis on his mental makeup:

"He's got self-confidence; it doesn't matter who he's facing," Poldberg said. "I look for him to just take off where he left off last year."

Binford said he'll look to limit pitches, get out of innings quickly, and let the defense work for him. (Michael Mariot made a similar comment, almost word-for-word, so that may be an organizational philosophy this season.) Mechanically, he said he's worked on staying back, saying that with his 6'6" height he has to be careful to avoid falling forward in his delivery.

"At times last year, I got a little bit on the side of the ball and didn't use that downhill plane." 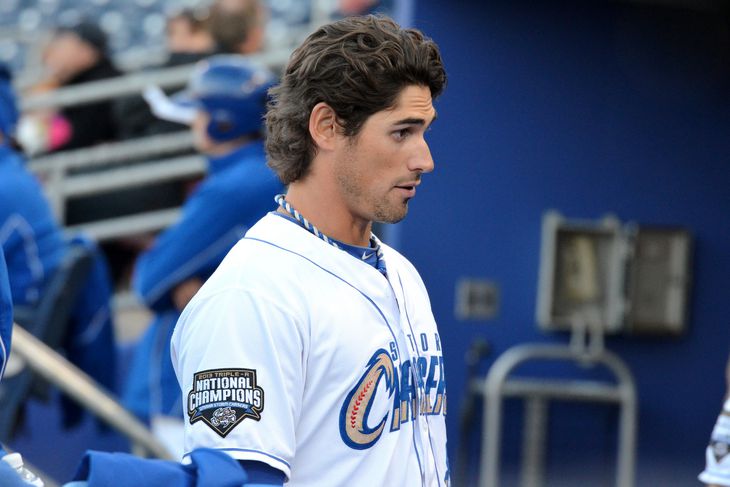 Rosters are set for Omaha, Northwest Arkansas, and Wilmington

Starting pitcher Aaron Brooks described his short time in the Majors last year as "eye-opening," and he had to remind himself it's the same game despite the bigger crowds and more intense atmosphere. His mission now is to fulfill a big league dream his father, a former ballplayer whose career was cut off in college by injury, never got to achieve.

Matt Fields had a dream come true by attending his first Major League spring training, ten years into his baseball career. He said he learned a lot about making the most of practice and repetition from Eric Hosmer,Mike Moustakas, and Lorenzo Cain.

The Omaha Stormchasers begin their defense of the Pacific Coast League title on Thursday in New Orleans.