It's time to drop Jeremy Guthrie from the rotation

Share All sharing options for: It's time to drop Jeremy Guthrie from the rotation

After Sunday's loss to Detroit Ned Yost was asked about Jeremy Guthrie. This was his reply, paraphrased likely:

Yost expressed support for Guthrie, and said he would afford him time to work through this slump. We will see how long the patience lasts.

Guthrie has given up at least 3 runs in every start, 4+ in all but one, and Sunday he gave up the most runs he has since early-September last year. Last years Guthrie was alright because he would sometimes have a bad outing and following it up with a good outing or two. He's yet to have a single good outing this year, even by Guthrie's standards.

Jeremy has been pegged as an "innings eater" the past several years, but inning eaters are only nice when they aren't giving up 4+ runs in the eaten innings.

Guthrie was never an "ace", but he provided some value last year as a 5th starter type. He successfully "ate" 200 innings with a reasonable 4.13 ERA and 4.32 FIP. While I'd take that from a 5th starter most of the time, he needs to be a cheap 5th starter... something Guthrie was not. In 2014 he earned $8M and was worth 1.1 fWAR. That's basically an even contract for both sides, but that's not how you want to come out as a 5th starter from a business side of things. Here's what similar pitchers were making in 2014...

Now, free agency vs arbitration always plays a part in the cost of a contract, but for the value the Royals received in 2014 they could have possibly received it cheaper elsewhere. This is nothing new... we knew Guthrie's was probably going to not be worth his contract back when he signed it and we know Dayton Moore likes to overvalue inning eater types.

Guthrie hasn't been very good this year. This isn't him underperforming or a bad luck as he wasn't projected to do so in the pre-season nor the rest of the season is he being projected to really be any better.

All three systems projected him to be a basically replacement level player in the preseason and still project the same from him going forward. Of course, Guthrie has been worse than replacement level so far this season as of this writing (likely not going to be any better once the numbers update). Guthrie has been striking out as many batters as he has been walking with an exact 1 K/BB, and his strikeouts have gone down more than his walks have gone up (not that a K/BB of 1 is really good in any scenario). At least in 2014 Guthrie had a league average K/BB, but he's been miserable this year.

This isn't just a bad streak either. Guthrie has been poor over his last 20 starts dating back to last year as he has an ERA of 4.80 (excluding Sundays game) and 4.40 FIP. This year though he's just been overall poor and as mentioned earlier he hasn't been able to pair bad starts with good ones.

Also there's been a drop in his fastball velocity, which is understandable for a 36 year old who's thrown 1600 career innings. It's understandable, but it isn't inexcusable for performance. At one point as recent as last April/May Guthrie was able to run his fastball into the higher 90's, but so far this year his peak fastball levels are at the same as his late October maxes from last year after throwing 190 innings.

Cutting Guthrie at this point would be somewhat tolerable. He doesn't really project to be any better going forward so losing him may actually be addition by subtraction. For a team competing in a division race, the Royals can't afford to run a replacement level or worse starter out on the mound every 5 days. 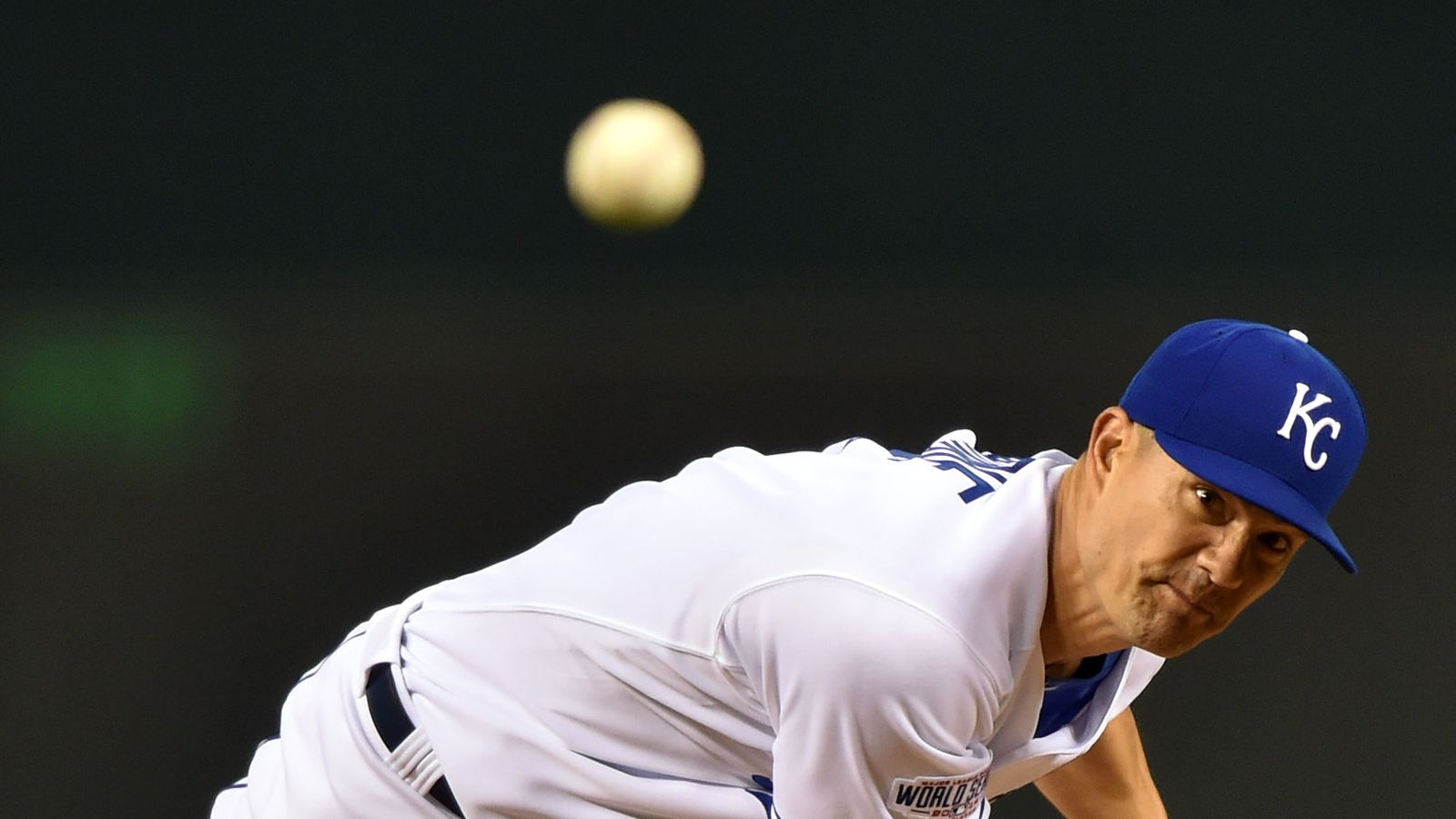 How does Jeremy Guthrie project to pitch in 2015?

From a cost perspective the Royals would eat whatever remains of his $9M 2015 salary and the buyout of his 2016 $10M mutual option for $3.2M, essentially eating around $11M remaining on his deal. There's basically zero chance of trading him and his salary away, and if the Royals were to try it would cost giving up something of real value along side him.

Guthrie is a sunk cost at this point likely. There is no redeemable upside left that they could salvage something out of him over the course of the remaining season. A sunk cost is a hard pill to swallow, but by definition they are useless and cannot be recovered. Cutting ties with him stops the bleeding at the same cost as starting him every fifth day.

As far as replacements for Guthrie, the Royals are too stocked here. Chris Young had of course a good showing Friday night, but hasn't thrown more than 6 innings since July of last year and hasn't had a league average strikeout rate since 2011. Still, he's been able to pitch a bit through taking advantage of his height and pitching up in the zone.

Brandon Finnegan had some shot at one point of being the rotation, but he hasn't exactly shined in the minors or majors this year so far. Also he hasn't thrown more than 65 pitches in a game since TCU last summer.

Yohan Pino has been the de facto long reliever for the Royals so far and in 2014 he was a full time starter in all the levels he bounced around at for the Twins. Pino had a league average strikeout rate and better than average walk rate in his 60 innings starting for the Twins last year. His ERA was poor at 5.07, but his FIP 3.94 and the Twins had one of the worst defenses in baseball in 2014.

It would be swell to be able to swap Guthrie for a healthy Kyle Zimmer or Sean Manaea, but both are still injured and have yet to pitch this year. Zimmer is expected to make his first start of the year on May 10th for Northwest Arkansas. The Royals expect Sean Manaea to leave extended spring training by the end of May for either rehab at a lower level or directly to Northwest Arkansas.

The TL;DR of this article is that Guthrie hasn't been good in 2015, and probably won't be good for the rest of 2015. This isn't just a slump, and there are real attributes causing his struggle so far. The Royals can't afford to continue giving starts to Guthrie going forward. They also don't have many in house options from veterans waiting in AAA to prospects.