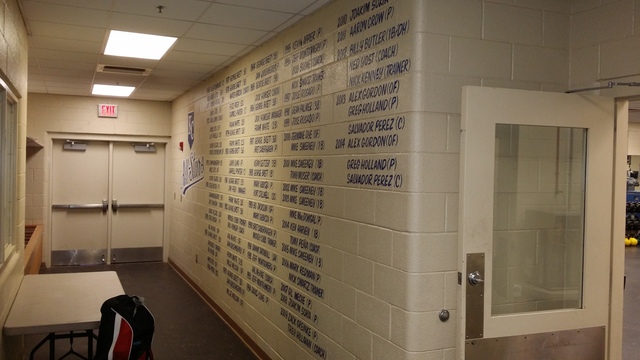 If current trends continue, this wall will need more space

I woke up a lot more sore on this day than I had all week. Fortunately, my knee (bruised by a pitch in Day 1) was in great shape. Many of my teammates were not so lucky, however: one guy on our team had wrecked his entire leg somehow, and another guy had knee problems. I think a third guy blew up his hammy. By the way, if you've never seen the consequences of a strained torn blown hamstring, they are awful to look at. The entire back of the leg from butt to knee turns purple.

I sat down for breakfast at the hotel with Balboni. I told him that we really needed him to have been a little worse at his job in October. He chuckled and said he did feel bad about it, but the job's the job.

Upon arrival, I dutifully reported to the training room for ice and ibuprofen. 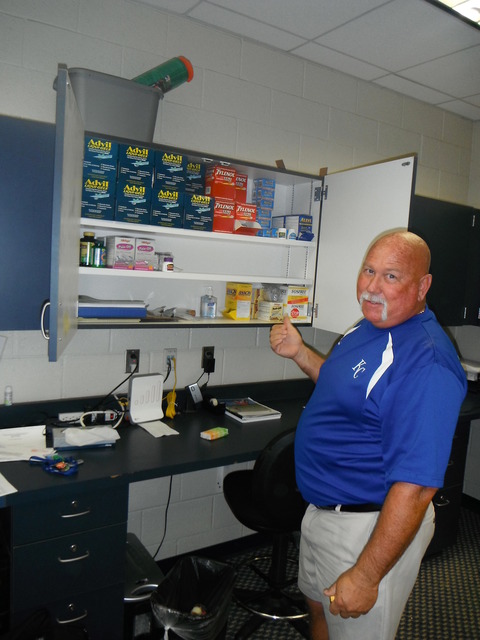 I asked them if it was necessary to continue this regimen, as I wouldn't have even known I was hurt unless I got whacked again on that knee. They informed me that the reason I felt so good was because of what they were doing. Touche, trainers.

After my ice treatment, I walked back into the clubhouse. Our gifts today were two 1985 World Series Tervis glasses. A couple of minutes later, a special visitor came by. 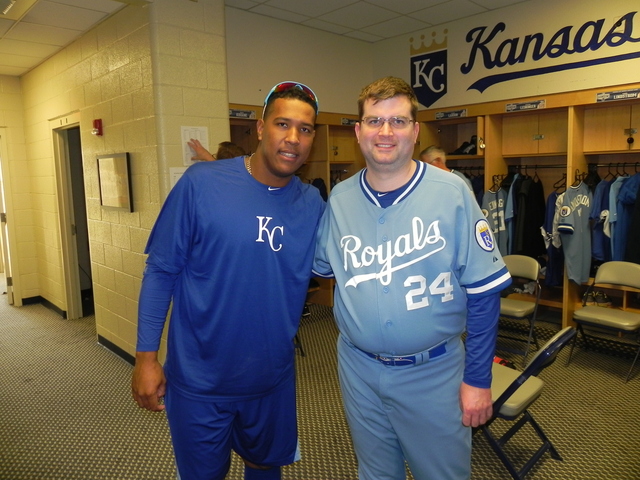 I knew he had reported to spring training early, so I packed my wildcard ticket: 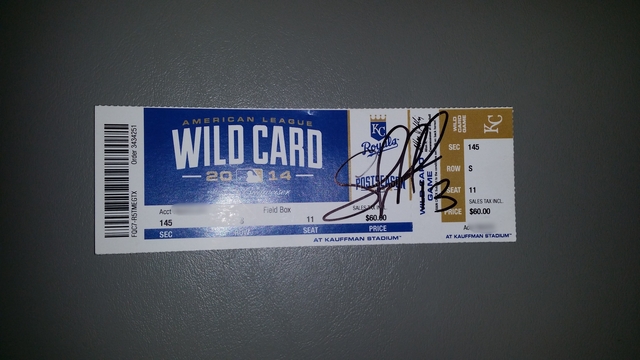 In professional baseball, kangaroo court is where players discipline their own. The infractions are typically minor and relatively consequence-free: having your back pocket turned inside out, your fly unzipped, forgetting the count, or losing track of outs can result in a summons. The punishments are always fines; I've heard in the major leagues that the typical fine is one or two hundred dollars. You have the right to appeal, but if your appeal is rejected (and, since it's called kangaroo court, you're always guilty anyway) your fine is doubled. Sometimes the money goes to the clubhouse attendants ("clubbies"), sometimes the money is donated to a team charity. Our fine structure was $2 for minor infractions, $5 for major infractions, and I think a couple of people got fined $10, with the money going to the clubbies. Kangaroo court was taped by the videographer and included in all of the packages, so I'm able to quote it with better accuracy than other exchanges at camp where I just have my (sometimes beer-addled) memory.

Remember from Tuesday the guy on our team that had Brett on the back of his jersey? Well, he paid for it today. The real Brett summoned him:

"[Bob's last name]...Why don't you have your f***in' name on the back of your jersey? You're embarrassing my namesake! You've got Brett on the back of your jersey, right? Why don't you have [last name]? And why didn't you know what field you're on? Do you know what team you're on? That's $2". He appealed to Judge Mayberry, saying that he thought maybe people were putting their favorite players on the back of their jerseys. Big John gave his 'booo!' and thumbs down of denial, and his fine was doubled.

Another guy was fined by Sundberg for absentmindedly wearing his GoPro into the bathroom (in hindsight, I wish I had bought a GoPro, or borrowed my dad's that he got for Christmas that year). Jamie Pryor fined Sabes for his antics in our game on Tuesday, Sabes retaliated by fining Jamie for trying to complain. In Sabes' defense, Captain Kirk, an 81 year old member of Team Red, chimed in his support of Sabes by saying that he came to camp to swing. George fined Pryor for getting lost in one of the vans on the way back to the hotel ("What's the charge?" "Getting f***ing lost!"). Kangaroo court is as much about joking around as it is correcting behavior. 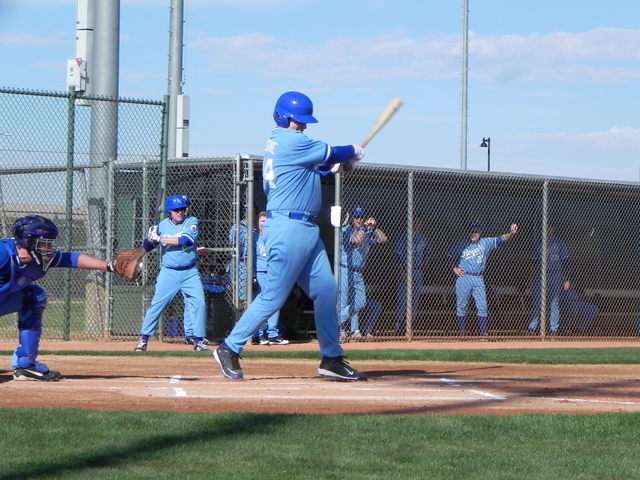 I got some extra duty in these games. Because we had several guys who couldn't run, I was their "designated runner". I would stand behind the umpire, lined up with home plate, and take off on contact. I don't have many notes on my specific performances on either of these games; our offense continued to struggle. I don't think I reached base either as a batter or designated runner. I did get a bit aggressive in running out a foul ball, this would get me in trouble on Thursday in court. We lost this game in a blowout, 8-0. I do have in my notes that I quit wearing my (prescription) sunglasses while at bat starting on this day, and I was making better contact. 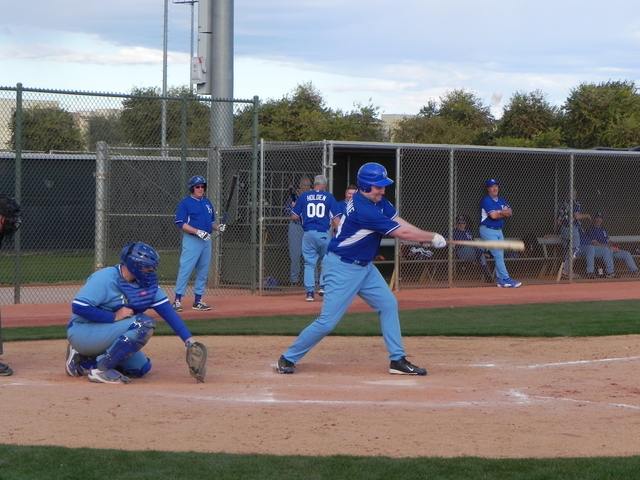 I think I remember the least about this game; again, I didn't make many notes about it. We lost to the eventual champion Team Orange "Crush" (credit Willie Wilson) 13-2.

I was pretty beat after the day. My back was really starting to give me issues, and everything was sore anyway from running. Don't let people tell you that baseball is just a bunch of standing around. If you're playing right, you're always running. You're running the bases. You're running to make a play on the ball. You're running to back up a play. Being in right for most of the games, I would frequently run toward first on infield ground balls to back up throws made to our first baseman. If the throw caromed off the fence to the outfield, I was going to be there to keep the runner at first.

The training room included a hydrotherapy room: one hot tub, and one ice tub. I put on my swim shorts, went to the kitchen area of the clubhouse, poured myself a cup of coffee (for warmth, normally I don't drink coffee after noon), and gingerly got in the ice bath. The water temperature was in the upper 40s. Whenever it would get above 50 (with 7 or 8 guys in the tub, it warms pretty quickly), the trainer would come in, grab a couple of scoops of ice from the ice machine, laugh sadistically, and dump the ice in. I had done an ice bath before, and I knew that the suffering now would be well worth it. The worst part is feet: your toes get really really cold and they start hurting a lot. But my ankles were sore, so I needed to keep my feet underwater.

I sat in the tub for 10 minutes. I looked like a lobster when I got out. But I felt like a new person. I can't recommend ice baths enough for post-strenuous exercise relief. Drink a hot beverage coffee, wear pants and socks for your first time, don't stay in for more than 10 minutes, and have a partner watch you just in case. Don't do it if you have heart or blood pressure problems, though.

In Day 1, I mentioned the Bud Black story. My dad went to a game in '87 or '88 with his company and I guess they got to hang out for a bit with some of the players. He got Buddy Black to sign a ball for me. I had told Bud the story and that my dad would be flying in on Tuesday.

Fast forward to April, about 3 months after camp, our photos were delivered on DVD; I put them online for family and friends. My dad and my stepmom had both just retired, so she was putting him to work doing spring cleaning. While he was cleaning out the basement, he found this photo, and promptly scanned it and sent it to me: 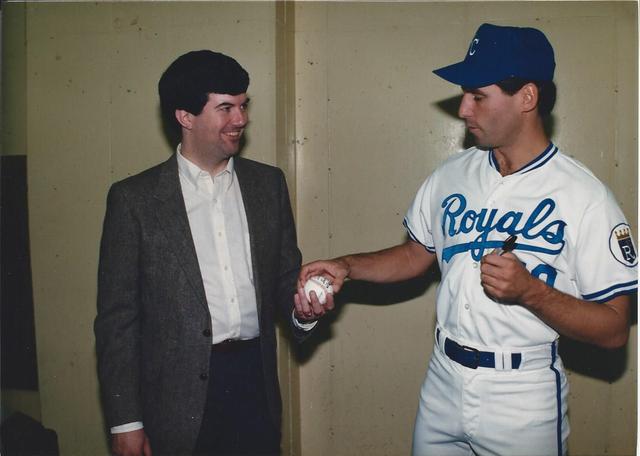 Neither one of us could believe the fortunate timing of his find. I guess that's why one of his favorite sayings is "timing is everything."

Back to camp, I had taken the ball with me, with more autographs on it now, and on Wednesday, nearly 30 years later, its journey had come full circle: 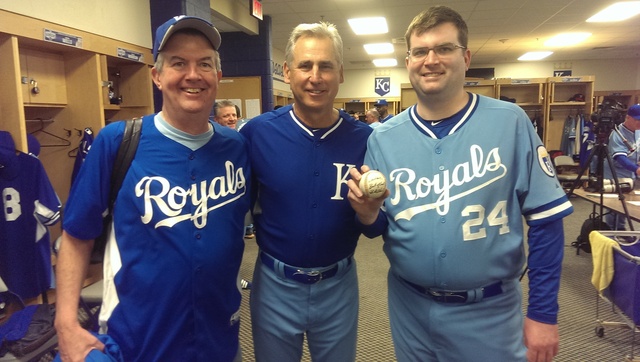 As I was writing this, Buddy got fired from his job as manager of the Padres. We'll always be fans, Bud.

Wednesday evening was scheduled for team dinners. Ours was at Gordon Biersch near our hotel. We were originally seated at a big table in the middle of the restaurant, but a few feet away was Team Blue. Pryor wanted better accommodations than Brett, so he sweet talked the staff into giving us the private room.

We went around the table with introductions and stories. I am a software developer for an anesthesiologist billing service. Pretty boring to most people (though not so much for the anesthesiologist on our team). But I had a pretty interesting story: flash back to the November 20 edition of the Rumblings; see the Systems Architect position? It was a software developer position for the analytics department. I applied for it, got an email back the next day, and for my "interview" I was given an Excel spreadsheet of PitchFX data from I believe AA Northwest Arkansas. In it was about 100,000 pitch records in it (with names and game dates sanitized, although not completely). I was told to put together a web app that a manager or GM might use to evaluate these pitching performances by December 5. Long story short, I got the app together using Ruby on Rails (which is what I use at my job anyway), importing the data set into MySQL, and using a Javascript framework called Highcharts to make some pretty charts. Unfortunately, another candidate "blew [the hiring managers] out of the water" and I didn't get the position. But how many people can honestly say they even got to apply for their dream job?

Anyway, I told this story (complete with a plug for Royals Review!) at the dinner, and Pryor pointed to me and said "Jamie, this guy is the smartest guy on the team!". Jamie asked where I went to college, and then slipped and asked the St. Louis question. We'd all had a few beers, so I turned on him: "What the f*** are you doing asking me the St. Louis question during a 1985 reunion?"

After dinner I apologized to Jamie for giving him shit; he apparently was unaware that the loo question is a thing. He was cool about it; he even gave me a new nickname for the rest of camp: Software. We packed up and headed out in the vans.

In the next episode, we finally get to the alumni game, and I am hauled into kangaroo court.